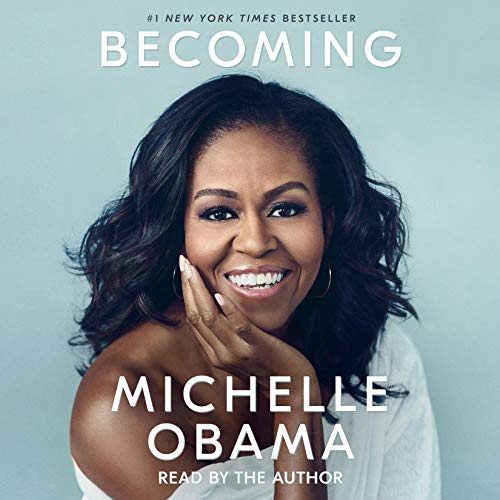 An intimate, powerful, and inspiring memoir by the former first lady of the United States.

In a life filled with meaning and accomplishment, Michelle Obama has emerged as one of the most iconic and compelling women of our era. As first lady of the United States of America - the first African American to serve in that role - she helped create the most welcoming and inclusive White House in history while also establishing herself as a powerful advocate for women and girls in the US and around the world, dramatically changing the ways that families pursue healthier and more active lives, and standing with her husband as he led America through some of its most harrowing moments. Along the way, she showed us a few dance moves, crushed Carpool Karaoke, and raised two down-to-earth daughters under an unforgiving media glare.

In her memoir, a work of deep reflection and mesmerizing storytelling, Michelle Obama invites listeners into her world, chronicling the experiences that have shaped her - from her childhood on the South Side of Chicago to her years as an executive balancing the demands of motherhood and work to her time spent at the world's most famous address. With unerring honesty and lively wit, she describes her triumphs and her disappointments, both public and private, telling her full story as she has lived it - in her own words and on her own terms. Warm, wise, and revelatory, Becoming is the deeply personal reckoning of a woman of soul and substance who has steadily defied expectations - and whose story inspires us to do the same.

Want to listen in Spanish?
This title is also available with Spanish-language narration from the Audible Latino catalog.
Click here to try it for $0

Special invitation from Audible!
Learn more about Membership
List Price: $35.71
You Save: $4.46 (12%)
By completing your purchase, you agree to Audible’s Conditions Of Use
Sold and delivered by Audible, an Amazon company

Amazon Customer
5.0 out of 5 stars Everyone has a story to tell and Michelle Obama delivers a great one.
Reviewed in the United States on November 13, 2018
A window into her life so far, Michelle Obama gives us endearing, insightful, honest memories. From growing up in a working class household in Chicago, to leaving the White House residence, her story is unique and thought provoking. If you admire and respect the Obamas, you will like this book.
Images in this review

Mountain-man
1.0 out of 5 stars Disappointed
Reviewed in the United States on December 14, 2018
Verified Purchase
Slow and boring and self boasting.
Read more
4,765 people found this helpful
Helpful
Report abuse

Anthony Edwards
1.0 out of 5 stars Not worth the time if you actually want anything from the read
Reviewed in the United States on December 11, 2018
The last thing I wanted to read was a shallow minded patting on the back. I thought with the education, the time would be well spent. I was wrong.
Read more
4,511 people found this helpful
Helpful
Report abuse

Savvy shopper
1.0 out of 5 stars Don’t waste your money
Reviewed in the United States on December 11, 2018
Worst piece of crap ever
Read more
3,790 people found this helpful
Helpful
Report abuse

♫ Trouble ♫
VINE VOICE
5.0 out of 5 stars The World’s First Lady
Reviewed in the United States on November 13, 2018
I believe I always loved Michelle Obama. Her grace and dignity always seemed to come as a gift from above. Her spirit is so incredibly deep and strong. The stories from her childhood, her brother, her neighborhood, her family, inform us in a brilliant voice about what it was like in the place and time she grew up.

Michelle Obama has the empathy and the depth of character so missing in her media portrayal. I always felt worried that we were suffocating her. But there is a Michelle Obama who is bigger than the words on a page. She knows our pains, and she understands our lives. And we know her in this book. In this most private book, we know her in a way we could not have otherwise. Interesting that nothing here surprises me, it only affirms what I felt like I know: Michelle Obama is a person like us. She worked and suffered and overcame.

Her storytelling skills are exquisite. It left me a little breathless to hear her voice, unfettered and real.

I love the photographs.

Deborah
1.0 out of 5 stars A Birthday Gift
Reviewed in the United States on December 11, 2018
If you are an insomniac this book will definitely help that. A real snoozer.
Read more
3,401 people found this helpful
Helpful
Report abuse

Vicki L. Dorsey
1.0 out of 5 stars Terrible book
Reviewed in the United States on December 11, 2018
Poorly written, silly comments in bad taste, this is not a good book for a lady to read
Read more
2,624 people found this helpful
Helpful
Report abuse

DivaSoul
5.0 out of 5 stars An Amazing Book!! Buy it now.. #Oprahsbookclub
Reviewed in the United States on November 13, 2018
Michelle Obama is my voice, a voice that may never be heard with thoughts, feelings and experiences similar to mine yet they don’t matter until now. Thank you Mrs. Obama! For being the voice of this African American woman❤️ Everyone should buy this book!
Read more
2,201 people found this helpful
Helpful
Report abuse

Brenda Nelson
5.0 out of 5 stars Great Read!!
Reviewed in the United States on November 13, 2018
Verified Purchase
I read a lot of negative reviews, but I don’t understand why. I enjoyed reading her story from her perspective. Some parts made me sad; however, I’ll always view Michelle Obama as a role model.
Read more
2,086 people found this helpful
Helpful
Report abuse
See all reviews

Slipknot
5.0 out of 5 stars Wonderful
Reviewed in the United Kingdom on November 15, 2018
Verified Purchase
I thought I couldn't love this family more, but after reading this beautiful, moving story, I know that I and millions of others were so right to have faith in these genuinely good people. I am glad that Michelle gets to have her Barack back again, but oh, how very much they are missed - especially in contrast to what came after...
Read more
181 people found this helpful
Report abuse

LiamKincaid
1.0 out of 5 stars The Case for the Defense - Part 1
Reviewed in the United Kingdom on February 14, 2019
Verified Purchase
Michelle and her husband accomplished and overcame a lot, even before they became the First Family. I think Obama's 2008 candidacy had a lot of energy and purpose. However, after he was in office, a lot of that energy dissipated and he failed to sufficiently differentiate himself from policies left down by his predecessors in many areas. What is good about Michelle's book is most of it does not focus on each and every cranny of every year in the Presidency. Most of it is her earlier life and events. The big events in the Presidency occupy very little space. I give this book one star because of the ending. Michelle clearly is very devoted and defensive of her husband and his achievements.

As much as we may not like it or agree with it, political office holders normally pave the way for their successors (whether they intend to or not). Obama's choices paved the way for Trump to campaign and to win the Presidency, much like G W Bush's choices paved the way for Obama. Michelle is content to not interpret the results, but bash some of the electorate for not voting for a woman and for voting for someone she describes in insults. For a family that is normally revered for deep analysis of complicated issues, Michelle's writing style and choice of words on this was very disappointing and in my opinion, narrow-minded. Michelle comes across as believing America was best and meaningful when her husband was it's President. She has a hard time seeming to come to terms with the fact that people might make different choices or that she and her husband will have to leave behind the mantle of being responsible for the nation, in their respective areas.

It was a disappointing and short handed book in my mind. Fans of the Obama's will find much to enjoy, I am sure. But those who enjoy deep analysis of history, will be disappointed. I hope that Barrack's book will be more insightful and deeper (The Case for the Defense - Part 2).
Read more
166 people found this helpful
Report abuse

Dan Moorcroft
1.0 out of 5 stars Not what is says on the tin
Reviewed in the United Kingdom on May 25, 2019
Verified Purchase
This product does not work at all. Got it for my mum for Christmas. She has read 90% and still looks nothing like Michelle Obama. Waste of money
Read more
143 people found this helpful
Report abuse

absg
3.0 out of 5 stars Tedious to read
Reviewed in the United Kingdom on May 24, 2020
Verified Purchase
Of course, many people want to know about Michelle Obama. However, I was disappointed by this book. She writes so much about her ambition, she really got on my nerves with that. All the details where and with whom she worked on what, it was really tedious, I must say. There are many interesting bits about her private life, too. I loved reading about her childhood.
But it's not my favourite book. When I had finished it I was glad to get rid of it and pass it on to a friend.
Read more
93 people found this helpful
Report abuse
See all reviews