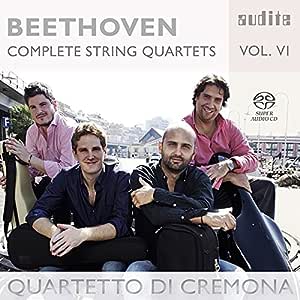 Early and late with Beethoven this always implies developing questions and expanding compositional ideas. In the case of the works recorded here, the A major Quartet from the Op. 18 set and the B-flat major Quartet, Op. 130, the focus is on folk music and its integration into art music: a recurring, central subject for the composers of Viennese Classicism which also guaranteed general accessibility to their music. The variations on a simple theme in the Andante of the Quartet Op. 18 No. 5 represent such a case of looking towards popular music, as also does the Alla danza tedesca from the late Quartet Op. 130, where the rhythm and character of the good old German dance is alienated to such an extent that it seems to appear as a damaged recollection, more than as an actual dance. In all other aspects, however, the styles of these two string quartets could not be more different. Who would not remember the enthusiasm created by his first symphonies, his sonatas, his quartets, a contemporary wrote not long after Beethovens death. All music lovers were delighted to find, so soon after Mozarts death, a man emerge who promised to replace the sorely missed. But alas, albeit gradually, though increasingly, he departed from his initial path, insisted on cutting a new one, and finally went astray. This going astray is today considered the most fascinating late oeuvre in musical history, to be experienced here in passionate and painstaking interpretations by the Quartetto di Cremona as part of their recording of the complete Beethoven Quartets.

4.0 out of 5 stars
4 out of 5
4 customer ratings
How does Amazon calculate star ratings?
Amazon calculates a product’s star ratings based on a machine learned model instead of a raw data average. The model takes into account factors including the age of a rating, whether the ratings are from verified purchasers, and factors that establish reviewer trustworthiness.
Top Reviews

robin friedmanTop Contributor: Philosophy
5.0 out of 5 stars Emotional, Glowing Beethoven
Reviewed in the United States on September 29, 2016
I fell in love with vol. 5 of the Quartetto di. Cremona's ongoing cycle of Beethoven's string quartets. If anything, my feelings were even stronger about this new release. The Quartetto di Cremona offers emotive, deeply musical performances of an early Beethoven quartet from opus 18 together with one of the quartets composed late in Beethoven's life. It is a creative touch to juxtapose early and late works, as is done in this cycle, to show differences and similarities in Beethoven's different compositional periods. Both works receive inspired readings.

The A major string quartet, opus 18 no. 5, may have been written with Mozart's A major quartet, D. 464, in mind. The works share some external features, and Beethoven may have viewed Mozart's work as a challenge to be equaled. Beethoven's quartet is for the most part rollicking and rambunctious more than elegant. It features spirited themes in the first, second, and fourth movements. The finale is particularly lively with a contrasting quiet close. The third movement consists of a slow theme and a set of five variations which reminded me of the opening theme and variation movement of Beethoven's piano sonata, op 26, written shortly thereafter. The ensemble playing in this performance is close while allowing for many soaring solos from the first violin. The Quartetto offers a delightful, joyful performance of this quartet from what Lewis Lockwood has called Beethoven's First Maturity.

The quartet in B-flat major, op. 130, is a complex masterpiece from Beethoven's Third Maturity. This quartet is in six integrated but highly contrasting movements. It begins with a lengthy serious movement with many sudden shifts in tempo and theme. It is followed by a rapid-fire scherzo of about two minutes in length. The next three movements have some of the most beautiful and lyrical music Beethoven composed. The first two of these are dancelike while the fifth movement, the Cavatina, is tragic, personal, and deeply heartfelt. The Quartetto Di Cremona performs in a spontaneous, lyrical style which makes this sometimes forbidding music endearingly beautiful.

Beethoven wrote two finales for op. 130. The first was the "Great Fugue" which emphasizes the difficult, severe nature of the work while the second, Beethoven's last completed work, emphasizes the singing, playful qualities of the piece. Listeners and performers have long debated the merits of the two alternative movements. The Great Fugue frequently is played as a stand-alone piece, op 133, and that is the practice in this cycle. The Quartetto Di Cremona concludes with the shorter, lighter finale, which harks back to the gaiety and lightness and shifts of tone in the five earlier movements rather than to their difficulty. The finale and the entire quartet have a beautiful feel of seriousness through laughter. The reading is one that even a newcomer to the world of Beethoven's late quartets would love.

In a review for the Scotland Hearald, critic Michael Tumelty, wrote that with this CD " the Quartetto di Cremona’s magnificent survey of Beethoven’s complete String Quartets moves securely and unquestionably into mastery." Tumelty further wrote of the op. 130 reading: "The great B flat Quartet opus 130, with its rollickingly-benign alternative finale, is pure aural and intellectual magic with the flawlessly-judged pacing adopted by the group: the finale is wonderfully cathartic following the gently-aching humanity of the Cavatina: such warm playing; such perfection on a silver disc; what a glory this is."

I loved these lyrical, soulful readings of two great Beethoven quartets, early and late. The recording is on the Audite label and distributed by Naxos. Naxos kindly sent me a review copy.

S. Rossitti
5.0 out of 5 stars A new benchmark in the making
Reviewed in the United States on July 20, 2016
This is the sixth volume of a planned complete recording of Beethoven's string quartets by the Quartetto di Cremona. The contents are the early String Quartet in A major, Op. 18 No. 5, and the String Quartet in B-flat major, Op. 130, the latter concluded with the charming Allegro that has been called its “little” finale (proponents of the “grand” finale will find the Grosse Fuge, Op. 133, in volume 3 of this series). As usual, the Cremonesi are in great form. Their performance of the Mozart-inspired Op. 18 No. 5 is simply rapturous, and the contrasting characters of the “radical” Op. 130 are cheerfully portrayed: the “serious and heavy-going” start (in the composer’s words) goes “modern” in the Presto second movement (as noted by Stravinsky in the late 1960's: “the written-out violin glissando in the Presto… would pass undetected as a contribution by Beethoven in a collage of last week’s premières”), which is followed by a gracious “poco scherzoso” Andante, by a folkish German valse, by the “tormented” Cavatina, and by the “little” finale. As in the previous installments of this series, the sound quality is excellent.
Read more
3 people found this helpful
Helpful
Comment Report abuse
See all reviews from the United States