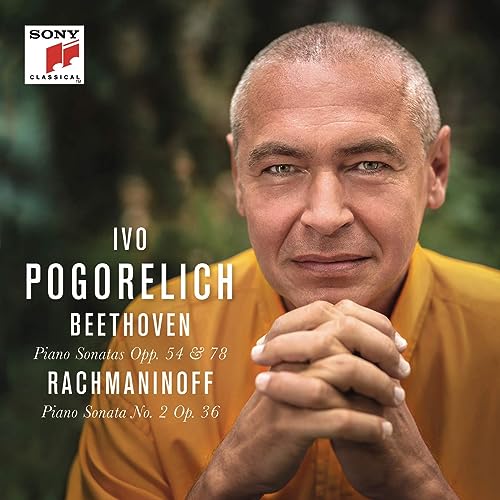 Ivo Pogorelich
July 17, 2019
4.3 out of 5 stars 76 ratings
See all 2 formats and editions Hide other formats and editions
Buy the CD album for $12.98 and get the MP3 version for FREE.&nbspCD album ships from and sold by Amazon.com. Terms and Conditions. Does not apply to gift orders. Complete your purchase of the CD album to save the MP3 version to your Music Library.

NeovercingetorixTop Contributor: Classical Music
4.0 out of 5 stars A somewhat mixed return
Reviewed in the United States on August 25, 2019
Verified Purchase
Ivo Pogorelich is back, and as per usual, his interpretations may evoke love it or hate it responses. The two small Beethoven sonatas are variable. Op 54 starts with an In tempo d'un menuetto where Pogorelich makes sure to contrast the first and second themes to a wide degree, but the minuet, while attractive, is fairly affectless, and the triplets theme is fast and strong, but something seems held back. The Allegretto is all forward motion, with some weighty left hand playing, and works fairly well, but here one wonders what the pianist could have done a quarter century ago. Op 78 fares much better. Pogorelich plays the first movement at a daringly slow 9'15". Many people may not like what he does here, but he largely manages to make his conception work. The sonata becomes sort of like an additional late period work, and that long first movement sounds uncommonly lovely on the surface and exquisitely detailed, but it also sounds like the music is being dissected. But it is next to impossible not to really like how he stretches out the music without making it fall apart, and even if individual phrases and arpeggios get elongated, with extended note values and lengthy pauses, all with personalized rubato thrown in throughout, Pogorelich manages to captivate. Some of the playing makes me wonder what a second recording of Op 111 might bring. The Allegro vivace is also slow, and here the use of rubato is potentially obtrusive, and wouldn't work at all if he didn't both make the music seem slightly humorous and deliver some lovely right hand playing. It's definitely not a standard conception of the work.

In the Rachmaninoff Second, in its 1931 guise, Pogorelich applies some of the same interpretive approach as he did to his Brahms disc, bringing the work in at nearly thirty minutes. This seems preposterous on its face. And it more or less is preposterous. But. But, Pogorelich turns the piece into something different. He can and does play the loud music with ample power in the opening movement, even if it sounds almost ugly and too bass heavy at times, but he also breaks down some passages into short bursts of pure aural beauty mixed with pauses for effect. It's dreamy, hazy, a reminiscence. But it is the Non allegro - Lento that captivates most. Coming in at over ten minutes, it is way too slow, but it feels freed from any structural constraints, a musical stream of consciousness where the pianist uses the score as a starting point, and some of the playing is so ravishingly beautiful, that one may just be transfixed. (Of course, some listeners may entirely detest what the pianist does, which is perfectly understandable.) The Allegro molto has playing that could fairly be described as banging in places, and it sounds uncommonly and unnecessarily thick and blocky, and in a more conventional performance the playing would be basically disastrous, but in this context, it makes more sense, to the extent the interpretation makes sense.

I enjoy the disc quite a bit as a whole, but none of the interpretations are truly great, and Pogorelich does not seem to be what he was in his younger days.

Sound for the recordings, made in 2016 and 2018, is a bit problematic, and certainly not state of the art. The sound is bass heavy and somewhat opaque, and while Pogorelich plays with wide dynamic range, the sonics do not appear to do full justice to that fact. Curiously, the dynamic range seems wider through good headphones. Maybe whatever Sony releases next will be more up to date sonically.
Read more
6 people found this helpful
Helpful
Report abuse

David A. Lopez
4.0 out of 5 stars their own place and time
Reviewed in the United States on September 6, 2019
Verified Purchase
there’s some gorgeous music-making on this album. there is definitely the spirit of beethoven, there is absolutely the spirit of rachmaninoff — but i feel pogorelich may be injecting other expressions from other compositions into these pieces? For example, the rachmaninoff is scintillating and pulverising, but at times I wonder if I’m listening to a transcription improvisation of Isle of the Dead or perhaps even The Bells. this album is more of a tribute to the composers’ potentials of communication rather than traditional literal interpretations of the actual works, if I’m saying that right? lots of consideration went into this record, and I will be playing this disc again and again for many years to come specifically for the devastating beauty of the first two movements of the rachmaninoff sonata... I am very excited for his future record releases!
Read more
5 people found this helpful
Helpful
Report abuse

Queen Margo
5.0 out of 5 stars Heavenly!
Reviewed in the United States on December 8, 2019
Verified Purchase
If you like Pogorelic, it is a must. I love this interpretation of the two sonatas better than any other ones I've heard. I've seen complaints that Pogorelic veers off too far from the composer's intent. I do not see it. But if you are a purist you may want to look for another pianist.
Read more
Helpful
Report abuse

David A. McKellar
5.0 out of 5 stars Pogorelich marks a glorious return to the recording studio.
Reviewed in the United States on December 7, 2019
Verified Purchase
The Beethoven sonatas are revealed as the small gems they are. The Rachmaninoff second sonata is revealed in all its virtuosic glory. A magnificent recital. So glad to have Pogo BACK!!!!
Read more
Helpful
Report abuse

Nick
5.0 out of 5 stars A MUST HAVE!!
Reviewed in the United States on November 11, 2019
Verified Purchase
A MUST HAVE!!!
Read more
Helpful
Report abuse

D G
5.0 out of 5 stars Still a mind-opening experience
Reviewed in the United States on August 23, 2019
Pogorelich's playing always makes me think and re-think. I do not always agree with him, but I consistently find his invitation to his musical world particularly interesting. His Rachmaninoff here is situated in a different dimension, a parallel universe I may say, but it is a world worth exploring. The second movement thereof especially drew my curiosity, my mind, and eventually my heart. Back in the days I had always tried to predict how he would play a piece before the release of a new album, and was never able to get it right. He consistently surprised and enlightened me. It is still the same case this time, and now I am on my third listen already. In a world where everyone is talented enough to be musically polished, technically competent and, don't forget, historically informed, we still need musicians like Pogorelich to pull us out of the day-to-day life and be surprised by what a musical experience should be about.

Edit: Just wanted to add that after Pogorelich I switched to two famous recordings of the Rachmaninoff (one by a legend of the golden age and one by an international competition winner). I had considered both recordings as reference for the longest time. However, compared to Pogorelich's rendition, the two sounded "pedestrian", especially in the climaxes of each movement and overall the second movement. While one may think that Pogorelich took everything too slow, if one listens carefully, he never missed any climax and his built-up to the climaxes were well-planned and phenomenal in the end -- you know it when you are the very top of the mountain in each movement. The other two recordings in comparison simply have too many noises that would distract you away from the true essence of each movement.
Read more
9 people found this helpful
Helpful
Report abuse

pianoreview
1.0 out of 5 stars Sony Should be Embarassed
Reviewed in the United States on August 26, 2019
Anyone who follows Pogorelich knows his approach is to be different, and that fascinated audiences in the 1980s and early 1990s. Unfortunately, this recording is more than 20 years later - with his Rachmaninoff Sonata No. 2 slow movement practically a requiem, and the finale in itself a slow movement that stops at times. The opening Beethoven Sonata actually has at times banging and we are not talking the Appassionata here. In general, the incredibly expansive tempi (for the purposes of being expansive) reminds one of Michel Block at the end of his career. Sony could have had dozens of more talented pianists for this album, but instead they went for a name who has incredibly little left in the tank. I am still hearing the finale of the Rachmaninoff, which drags at a snail's pace. At least this will make a good party record to be amused by.
Read more
6 people found this helpful
Helpful
Report abuse
See all reviews