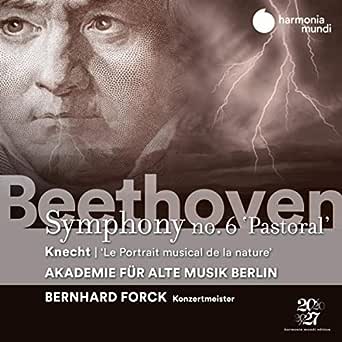 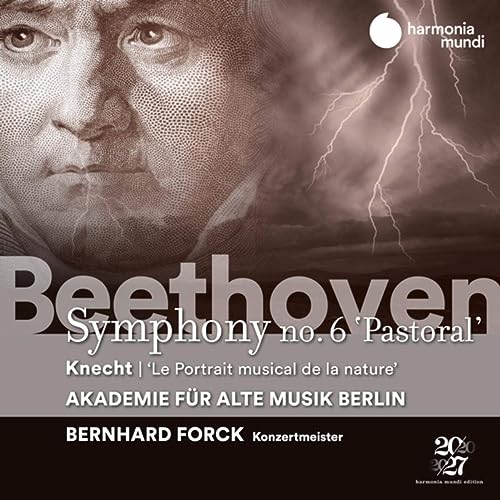 John J. Puccio
3.0 out of 5 stars Forck seems to adhere rather rigidly to Beethoven's tempo markings
Reviewed in the United States on April 19, 2020
The premise of the album is that nothing is created in a vacuum.

It uses the example of one of classical music's most-beloved works, Beethoven's Symphony No. 6, the "Pastoral" Symphony. Did Beethoven's program music, a series of tone poems really, spring entirely from the composer's brain, or did someone else's previous work inspire him? What we know for sure is that Beethoven appreciated a piece of music called Le Portrait musical de la nature ou Grande Simphonie ("The Musical Portrait of Nature or Great Symphony"), written by the German composer and organist Justin Heinrich Knecht (1752-1817) nearly a quarter of a century before Beethoven wrote his Sixth.

A comparison of each composer's movement titles give an idea of how closely they match, at least in spirit:
Beethoven "Pastoral":
1. Awakening of cheerful feelings on arriving in the countryside.
2. Scene by the brook.
3. Merry gathering of countryfolk.
4. Thunder, storm.
5. Shepherds' song. Happy and thankful feelings after the storm.

Knecht: "Le Portrait musical de la Nature":
1. A beautiful landscape where the sun shines, the gentle zephyrs flutter, the streams flow across the valley, birds chirp, a mountain brook trickles babbling from above, the shepherd blows his pipe, the sheep gambol and the shepherdess sings in her sweet voice.
2. The sky suddenly begins to grow dark, all the country around struggles to breathe and takes fright, the black clouds mass, the winds begin to howl, the thunder rumbles from afar and the storm slowly approaches.
3. The storm, accompanied by rushing winds and driving rain, roars with its full force, the treetops rustle, and the waters of the torrent heave with a terrible noise.
4. The storm gradually subsides, the clouds scatter and the sky brightens.
5. Nature, transported by joy, raises its voice to heaven and renders fervent thanks to the Creator in sweet and pleasant songs.

Surely, if Beethoven knew and admired Knecht's piece, the piece must have influenced him. The narratives, or story lines, of both symphonies contain enough similarities that it would be foolish to call it coincidence.

Whatever, maestro Bernhard Forck leads the period-instrument ensemble Akademie fur Alte Musik Berlin (Academy of Early Music Berlin) in historically informed performances of the two works, the Knecht, being the earlier of the two, coming first on the disc. Whether or not you enjoy period bands or HIP practices, the pairing offers us new and valuable insights into the history of Beethoven's music.

So, first up is Knecht's Le Portrait musical de la nature ou Grande Simphonie, completed in 1785. It's a little hard for me to assess how well Forck and the Akademie interpret it because, frankly, I had never heard the work before. What I can say is that they play it in a most vivid and colorful manner, probably close to the composer's intentions and with a sweet disposition.

Forck adopts what seem to me fairly restrained tempos, the music moving along in stately, elegant, sometimes sedate but always amiable fashion. One can hear echoes almost immediately of Beethoven's later work, as well as elements of Haydn and Mozart. It is, after all, still a product of the Classical Period, so Forck keeps it within the later stages of the Age of Reason while still maintaining its delightful tone. And certainly the piece is enlightening for illuminating its influence on Beethoven. Of course, as charming as Knecht's music is, it hasn't the wealth of memorable tunes Beethoven devised, so I doubt that Disney will be including it in any future Fantasia III.

Then, there's Beethoven's Symphony No. 6, op. 68 "Pastoral," completed in 1808. Maestro Forck follows Beethoven's metronome markings, so expect it to be faster than a traditional reading. For myself, I no longer care whether a performance may or may not be exactly as the composer intended because I've heard too many recordings where the composer himself has led the orchestra in one of his own works yet I've enjoyed another conductor's interpretation more. The "Pastoral" symphony to me is one of tranquil, contemplative, bucolic beauty and frolic, and in my mind to follow Beethoven's markings strictly can sometimes upset the serenity of much of the piece. My preferences are no doubt based on the older, more traditional performances I've known for so long, like the recordings of Karl Bohm (DG), Bruno Walter (Sony), Fritz Reiner (RCA, JVC, HDTT), Otto Klemperer (EMI, Warner), and Eugene Jochum (Philips and EMI, Warner), to name a few.

But I digress. What about Forck's period-instrument performance? As I say, Forck adheres closely to Beethoven's tempo markings, coming within a second or two of Roger Norrington's historically informed performance with the London Classical Players (EMI/Warner). So, if you admire Norrington's reading, you'll find Forck about the same, and if you already have Norrington's recording, you may find the album of value mainly for the Knecht curiosity. But for the Beethoven alone, I'd have to say Forck's reading too rigidly adheres to the composer's metronome, sucking a lot of the life out of the piece and making it sound rather mechanical. There is little of the light, airy geniality he put into the Knecht.

Rene Moller of Teldex Studio Berlin recorded the music in June 2019. The sonics have a nice cohesive sound, not entirely transparent but of a whole. Played too softly, it tends to appear muffled, but at a moderate level, one approximating a concert volume at mid hall, it can sound realistic enough. The timpani show up well, even though the dynamic impact is not always as strong as one might like. It's unobjectionable sound but not in the audiophile class of absolute clarity.

William G. Kempster
5.0 out of 5 stars An invigorating "Pastoral" for our time.
Reviewed in the United States on September 12, 2020
Another fine disc in Harmonia Mundi's seven-year series celebrating Beethoven. These recordings will be released spanning the period from 2020, the 250th anniversary of Beethoven's birth, and 2027, the 200th anniversary of the master's death. In some of these releases—which envisage both period and modern instrument performances—Harmonia Mundi's plan is to try to contextualize Beethoven's art with that of some of his perhaps lesser-known contemporaries, and to that end this disc also presents the "Musical Portrait of Nature" by Justin Heinrich Knecht (1752-1817), a work arguably seen as a precursor to Beethoven's famous "Pastoral" symphony.
While no Beethoven, the "Grand Symphony" is a delightful piece, and—as the notes accompanying the recording argue convincingly—it is highly likely Beethoven was very much aware of Knecht's earlier work, written perhaps around 1784, when writing his Sixth Symphony. Both pieces have a similar "program": opening with an idyllic country scene which is then interrupted by a storm before returning finally to something like the opening mood, and in doing so portraying a sense of relief and thanksgiving. The Knecht is not an insubstantial piece, either, coming in at a touch over 24 minutes. One could argue that the opening movement (8:55) tends to labor the point just a bit, but from the first hints of the storm approaching the music it interesting, colorful and engaging. No small part of the effectiveness of the piece is down to the exceptionally poised, detailed and finely nuanced playing from the (conductor-less) Academy for Ancient Music Berlin. I have been aware of this group for some time, and always thought they were competent without being particularly exciting. This release, however, is on an entirely different level, and shows the group have now risen to a standard that is comparable with any of the finest original instrument ensembles around. This is particularly to be seen in their performance of the Beethoven, which is as good as any I have heard, regardless of the make-up of the ensemble.
I well remember in the late 1980's and early 1990's when Roger Norrington's performances of the Beethoven symphonies on period instruments came as somewhat of a revelation to many, myself included. It seemed to me that this way of looking at these fundamental pillars of the Classical canon was somehow more appropriate for our time and place. The vitality, energy, and sometimes even a sort of "impoliteness" in these performances was really refreshing. This new recording, however, is better than those early period-instrument ones were. The playing is uniformly of a higher standard, intonation is excellent, and yet a certain lack of refinement—like a blaring horn sound, for example—is still available when appropriate. In this "Pastoral" tempos are generally on the quick side, which is entirely appropriate, and the string playing in particular is exceptional. At no time does one ever feel that the lack of a conductor is in any way detrimental, and there is plenty of entirely appropriate, yet subtle rubato, that gives shape and adds a great deal of charm to this performance.
It is easy to think that one has heard everything when it comes to the Beethoven symphonies, but I would urge perhaps jaded listeners to try this new performance out. There really is nothing quite like Beethoven's "Pastoral" to restore one's faith in humanity, and we urgently need that right now! This is an outstanding performance in excellent modern sound, and I believe that this new recording is now a clear first choice for original-instrument performance. I know of no modern-instrument performance that gets things as right as this one, either. Wholeheartedly recommended!
Read more
Helpful
Comment Report abuse
See all reviews