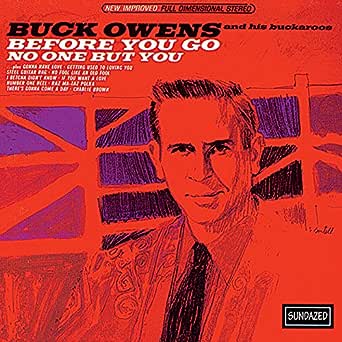 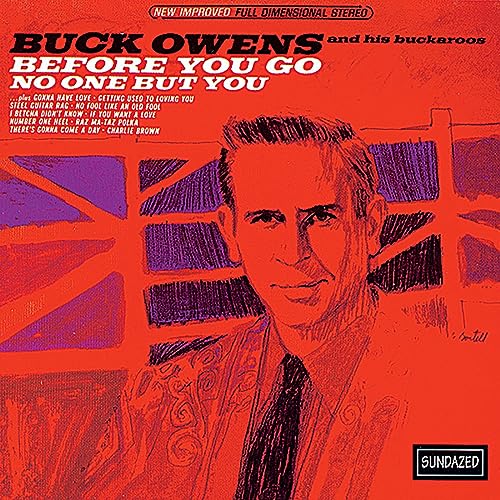 Before You Go / No One But You

R. Webb
5.0 out of 5 stars Just A Little Raz Ma-Taz...
Reviewed in the United States on July 14, 2008
Verified Purchase
"Raz ma-taz", an instrumental featured on this album BEFORE YOU GO, showcases Buck Owens' hot lead guitar playing, that single pickin' distinctive Owens' sound that is untouchable and unmatched...released 1965, this is yet another classic Buck Owens album that ranks on the top level of the country singer's long and productive repertoire, of course backed up faithfully and thoroughly by his always trusted Buckeroos...more of that distinctive lead guitar is featured on the intro of, "Before You Go", other notable songs featured, "Gonna Have Love", "Getting Used To Loving You", then we hear Tom Brumley's steel guitar solo, "Steel Guitar Rag", don't forget the tight harmony team of Owens and Rich, wailing, "No Fool Like An Old Fool", listen for the 50's cover version of, "Charlie Brown". Another excellent Sundazed recording.
Read more
Helpful
Comment Report abuse

Jess
5.0 out of 5 stars Another Good One
Reviewed in the United States on April 12, 2006
Verified Purchase
SunDazed Records deserves recognition for releasing most of Buck Owens' Collection. This one "Before You Go" is one fine album. While it doesn't have the lyrical excitement of "Tiger By The Tail", this album showcases the craftmanship of the Buckaroos (and not just the stellar Don Rich). There are two instrumental tracks at the end of this Cd: the title track "Before You Go", and "Love's Gonna Live Here". And there's the raucous "Charlie Brown" that unabashedly shows the rockabilly influence that Don Rich brought to the Buckaroos. Sticking to his usual 2:00 formula, Buck brings 11 other songs to the table, including "Gonna Have Love", "No Fool Like an Old Fool", and "I Betcha Didnt Know". I suggest you get the whole SunDazed collection of Buck Owens, and this one should be near the top of your list. A+
Read more
5 people found this helpful
Helpful
Comment Report abuse

hyperbolium
3.0 out of 5 stars Another good mid-60s LP from Buck and the boys
Reviewed in the United States on March 24, 2002
The crispness of the music presented here, the stellar Owens/Rich harmonies, the twangy telecaster picking, and the solid rhythm section that swings on a dime from two-steppers to waltzes to shuffles would probably rate four-stars for any other band. But rated against the phenomenal run of music that Owens and the Buckaroos laid down throughout the '60s, the songs on this 1965 release prove a notch less moving than on the band's best LPs.
The opening single (which spent six weeks at #1) shows just how fine this band was at this point in their career, breaking from an upbeat rhythm to a downbeat waltz (and back again) without even blinking an eye. Owens and Don Rich added two more co-writes, "Getting Used to You" and the two-stepper, "No Fool Like an Old Fool." Owens' ex-wife, Bonnie, helped with the songwriting on the acoustic-and-steel ballad, "There's Gonna Come a Day," as well as the Don Rich sung "Number One Heel."
Owens teamed with fellow Bakersfieldian Red Simpson to write, "Gonna Have Love," featuring a stellar guitar solo from Don Rich and swingin' drums from Willie Cantu, and "(I Want) No One But You." Owens added two more solo compositions, "There's Gonna Come a Day," recorded in 1963 and held until this release, as well as the instrumental, "Raz-Ma-Taz Polka." Steel player Tom Brumley chipped in a fine cover of the Leon McAuliffe chestnut, "Steel Guitar Rag."
The original album closed with a rave-up cover of the Coasters' "Charlie Brown," showing off the Buckaroos' humorous side. This CD reissue tacks on a pair of bonus instrumentals drawn from "The Buck Owens Songbook," featuring the Buckaroos under the direction of Don Rich.
Overall, a solid album and a fine addition to a complete Owens' reissue library, but not necessarily the high-point to start with.
3-3/4 stars, if Amazon allowed fractional ratings.

Johnny Heering
4.0 out of 5 stars One more time.
Reviewed in the United States on August 23, 2006
This album by Buck Owens was released in July, 1965. It was titled after his latest Number One hit, "Before You Go", and it's b-side, "No One But You". The inclusion of the b-side in the album title is surprising, since it wasn't a hit. However, the album does have another song which went on to become a Number One hit, "Gonna Have Love". Besides those songs, the rest of the album is pretty good, too. Several good original songs and a couple of cool instrumentals. But my favorite, other than the hits, is a fun cover version of the Coasters R&B/novelty classic "Charlie Brown". The CD adds two bonus tracks, which are instrumental versions of Buck Owens hits from the Buckaroos album "The Buck Owens Songbook". Buck Owens fans will enjoy this CD.
Read more
Helpful
Comment Report abuse