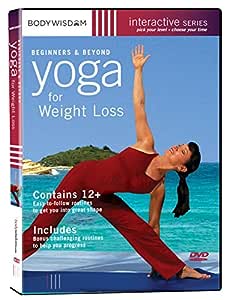 Beginners & Beyond: Yoga For Weight Loss for Beginners

Rated:
NR
Format: DVD
4.0 out of 5 stars 676 ratings
Available at a lower price from other sellers that may not offer free Prime shipping.

Reshape your body and feel great with these easy to follow routines. Now you can burn calories while toning and stretching your entire body. With 2 levels of routines, this DVD is perfect for both the beginner and seasoned student alike. Special bonus sec

4.0 out of 5 stars
4 out of 5
676 global ratings
How are ratings calculated?
To calculate the overall star rating and percentage breakdown by star, we don’t use a simple average. Instead, our system considers things like how recent a review is and if the reviewer bought the item on Amazon. It also analyzes reviews to verify trustworthiness.
Top reviews

Aurora Jinxx
5.0 out of 5 stars It has helped tremendously
Reviewed in the United States on April 11, 2016
Verified Purchase
I love this DVD. I have multiple chronic illnesses and can't exercise much because of my pain. I'm trying to lose weight to help my overall health and decided to try this. It's easy to pick up quickly as a beginner with no yoga experience. I've been doing it for a little over a month and I've already seen huge results. It's low impact so it doesn't hurt my joints as much as other activities, and I feel great after I do it!
Read more
32 people found this helpful
Helpful
Report abuse

Amazon Customer
1.0 out of 5 stars Not for beginners at ALL
Reviewed in the United States on January 29, 2013
Verified Purchase
Those who have said "This is great for beginners" are NOT beginners themselves. Experienced yogi should not write reviews on beginner products, because it's likely they don't remember what it's like to be a beginner.

There are two essential things in the title of this product that should define it: (a) 'Beginners' and (b) 'For Weight Loss'. The makers of this video need to assume two very important things of their audience: that they are both inflexible beginners to yoga, and that they are overweight. I am both of these things, and I wanted to get a video to try out a beginner routine at my own pace before I sign up for a class.

The first routine, which is claimed to be designed as a warmup for beginners, involves standing straight, bending double to the floor, shifting into a lunge, then into a triangular bridgeup and then into a pushup. The routine moves so fast that unless you understand the moves being described (or have watched the video enough times to memorize it), you won't be able to make the movements in time to keep up with her.

The next routine, entitled "Getting Started", involves standing up straight, raising the arms, reaching down and bending double to touch the floor, then 'jumping' back into a pushup pose and lowering into a pushup until only your hands, toes and forehead touch the floor before then pushing backwards with your hips until you're doing a forward bridge (I think it's called a 'downward dog' in Yoga). I bought this to start with a gentle, beginner's routine that is tempered for overweight people looking to lose weight. I don't know anyone overweight who is new to yoga who can 'jump' into a pushup pose.

Essentially this video is a collection of unrelated routines made for different videos, compiled here to serve as an advertisement for their other DVDs - they plug the DVD the routine came from at the end of each routine, and each routine seems to end rather abruptly as though it were just a clip.

This video is good to test out other videos in the series and see if you like them. And if you're maybe 20 pounds overweight and have at least had a few (maybe 10-12) yoga lessons then you would likely find this an ideal starting point. But this is NOT a DVD for complete beginners unless you're already in very good shape, and it's definitely not a DVD for someone who might be 50+ pounds overweight.

Breakdown of the stars:
-2 stars for not being a true product, but rather a collection of previews
-2 stars for not being what it says it is; it is neither designed for beginners, nor designed for someone overweight
-1 star for the strange, wooden smile and awkward voiceover that doesn't describe things in a manner that's easy to visualize
+1 star for being well-made, with nice locations and good sound quality

Britt H
5.0 out of 5 stars Body and Confidence Booster
Reviewed in the United States on July 16, 2015
Verified Purchase
I've never done yoga prior to this and I'd say I was relatively out of shape when I got it. That being said, the first time I did a routine i was cussing at the lady on the tv because the poses were so crazy and foreign to me. But the next day I was sore all over from working muscles that I tend to neglect at the gym. I am still doing the beginner routines but I am totally in love with how toned and tight my body has become since starting this. There has been a noticeable reduction in my waistline, thighs and arms. It gets you sweating, and most importantly it motivates me to keep moving throughout the day and I honestly can't wait to get home and do more. It's funny in the beginning, laughing at myself trying to balance and transition smoothly between poses, and then really rewarding when I finally master a pose. It's been great for my confidence and overall body image. I feel stronger and more in tune with myself than ever before. I think that the first time I tried it, I would have agreed with the folks who say it is too hard for beginners, but after the second and third time I did it I realized it boils down to familiarity and practice.
Read more
26 people found this helpful
Helpful
Report abuse

wysewomon
3.0 out of 5 stars Good routines, but some problems
Reviewed in the United States on November 28, 2012
Verified Purchase
I like this video quite a lot. However, there are two serious problems with it.

The first is that the model demonstrating the poses has TERRIBLE posture. She hyper-extends her pelvis in the worst way, and her upper body is very, very congested, especially about the shoulder girdle. I majored in dance in college, and this model would never have gotten away with that posture there. I can't believe someone demonstrating yoga is so unaware of her own body. DO NOT copy her posture or you will suffer for it later.

The second is that I would not at all consider this a beginners' video. Some of the stuff is okay, like the Sun Salutation with the Chair. It would make a good starting place for someone who has never done yoga before. But other things are not for beginners at all. Going directly into a half-lotus tree pose, for example. I can't even do that, and I've been doing yoga for years. And the video gives no alternatives to the poses. They go directly into the most extreme example of a stretch, and do not propose any modifications for people who may not be able to get there. I think this might lead people to try things they aren't ready for, because they think it's the only proper way to do it.

So, if you've done yoga before and know what you're about, this is a good video. I wouldn't recommend it for a true beginner, though.
Read more
12 people found this helpful
Helpful
Report abuse

Rachel303
5.0 out of 5 stars Great Fitness DVD
Reviewed in the United States on August 27, 2011
Verified Purchase
So, I've really only done Yoga off of DVD's, find myself in and out of it a lot, but had recently really wanted to get back into it because of its amazing benefits for my posture and my energy level (I am a hypothyroid and I find a lot of exercise leaves me exhausted, not energized). So, if a DVD leaves me feeling better throughout the day, that's the real test for me and what will keep me coming back for more. So far I've not been disappointed, what I find really refreshing about this DVD is that I start sweating almost immediately, and continue sweating through the whole workout. I also really like the way this DVD is laid out, there are so many plausible workouts for anyone to do, it doesn't have to be the same way twice. As for the weight loss aspect, I've only been using this for a few days so I can't attest to its benefits, but I can tell that my inner thighs and legs especially are getting a really good workout because I'm SORE afterward. I'm not a yoga expert, but I am a yoga DVD expert (on merit of having purchased/used so many) - this one is an excellent value.
Read more
12 people found this helpful
Helpful
Report abuse
See all reviews

Pam Ann
5.0 out of 5 stars Five Stars
Reviewed in the United Kingdom on November 18, 2015
Verified Purchase
The timing was good, and just as expected. Thank you!
Read more
2 people found this helpful
Report abuse

Glenna
4.0 out of 5 stars A good dvd for my collection
Reviewed in Canada on June 11, 2012
Verified Purchase
I purchased this DVD along with a few others to expand my at-home yoga practice, and I am pleased with it. It strikes a nice balance between beginner and intermediate yoga, since there are a variety of sequences of different lengths and skill levels. I have done the 50-minute fundamentals-and-beyond routine several times now and look forward to advancing further. The instructor/narrator does an excellent job of explaining the poses and form. It has made me appreciate foundational poses such as Mountain/Tadasana, and Downward Dog more than I used to, and understand the nuance of even simple poses. There is a lot of time spent in Downward Dog in this dvd - at first I really noticed it in my shoulders and arms, but feel a bit stronger now. Other challenging poses include Half-Moon.
Read more
6 people found this helpful
Report abuse

Carol T.
2.0 out of 5 stars Nice Dvd, but definitely not for beginners
Reviewed in Canada on May 18, 2017
Verified Purchase
Nice Dvd, but definitely not for beginners, instructions were easy to follow, but exercises a bit too advanced, i hurt my back using that and i am someone who already exercises (i go to pilates, I do cardio and do weights with a trainor)
Read more
Report abuse

Lady Stypher
5.0 out of 5 stars Great for beginners
Reviewed in Canada on August 18, 2014
Verified Purchase
Great DVD for beginners, definitely got me toned, and strengthened for more yoga! Have some poses you definitely have to work towards. I wish they had a few more routines.
Read more
One person found this helpful
Report abuse
See all reviews