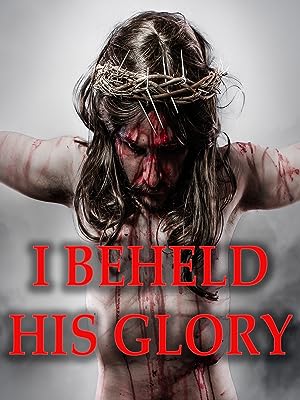 I Beheld His Glory

(18)6.853min2017ALL
This film celebrating the inspiring events of Jesus' last days is a faithful adaptation taken directly from The New Testament. Cornelius is a Roman Centurion who, upon orders from the Apostle Thomas, is sent to proclaim the glories of Christ. Cornelius recounts the story of Jesus' arrival in Jerusalem, the Last Supper, the crucifixion, and his appearance before Mary Magdalene.

Steve AlvarezReviewed in the United States on August 2, 2019
3.0 out of 5 stars
He lives!
Verified purchase
While some of it was accurate, there were spots that were not exactly accurate. It has been said the acting was good and I would agree with that up to a point; such as when the apostles are in the upper room or when they're talking about Jesus being there, they almost sound depressed rather than excited. The tomb was inaccurate as well because the stone was at least 2,000 pounds and was way off away from the entrance to the tomb because an angel had tossed it over there. I believe that the reason the apostles Peter and John were so amazed at the body not being there it's because he had left the burial cloth completely full but without a body, like a chrysalis.
For those who are interested in the Shroud of Turin go on YouTube and watch the latest forensic evidence as well as 3D technology applied to the shroud; you can actually see a model that looks like what Jesus might have looked like. In my opinion the evidence speaks for itself that Jesus guide and resurrected himself as God.
2 people found this helpful

MichaelReviewed in the United States on March 9, 2019
4.0 out of 5 stars
Eternal hope
Verified purchase
I liked it a different take. Worth the watch.

Jean WhiteReviewed in the United States on June 16, 2018
5.0 out of 5 stars
I Beheld His Glory
Verified purchase
I am very pleased with the quality of this product. It was money well spent!

Kris ZinkReviewed in the United States on March 16, 2013
4.0 out of 5 stars
I Beheld His Glory
Verified purchase
This is an Easter movie made in the 1950's, so the technology is not state of the art, but it's a good story of the Roman Captain Cornelius, who was the first convert to Christianity.
One person found this helpful

Eric D RidenourReviewed in the United States on December 1, 2017
5.0 out of 5 stars
HeartFelt
Verified purchase
Wonderful. A special movie.
2 people found this helpful

neognomicReviewed in the United States on February 26, 2021
2.0 out of 5 stars
(1953) (TV Movie)
Fraudulent information presented to trick the consumer. This is not a 2008 film. It was released in 1953 as a TV Movie and no amount of cleanup will fix what is wrong with the film quality.
While the content may be worth seeing the viewer should not expect 21st century quality.
SHAME on Ama zon for allowing this!

Daniel JolleyReviewed in the United States on June 30, 2009
4.0 out of 5 stars
An ageless and memorable account of Jesus' crucifixion and resurrection
This "Family Theater" presentation from 1953 is a most commendable account of Jesus' last days, crucifixion, and resurrection. The most noteworthy thing about it is the fact that it presents the Passion from the point of view of a Roman centurion who witnessed several of the key events in the story. Not only does this centurion accept Jesus as his Savior, we find him telling the story of Jesus' death and resurrection to some of Christ's Jewish followers in a town outside of Jerusalem. Despite the inclusion of flashbacks within flashbacks (a technique I usually decry quite vocally), this modest production quite effectively brings the Gospel to life in the space of just 55 minutes.

Roman centurion Cornelius (George Macready) arrives in Jerusalem shortly after Jesus' triumphal entry into the city. After hearing how Jesus drove all of the merchants and moneychangers from the temple and watching Jesus easily avoid the trap set for him by Pharisees asking about the payment of taxes to Caesar, Cornelius takes a personal interest in the Nazarene. He's present when Jesus is brought before Pontius Pilate and he's also on hand when Jesus is crucified and dies - he even attempts to warn Jesus to leave Jerusalem before it's too late. Through the disciple Thomas, he learns the details of the Last Supper and other events he doesn't personally witness for himself - and that includes the victory of Jesus over death.

While the presentation does not address every detail of its subject matter (which would have been impossible to do over the course of just 55 minutes), it stays true to the Biblical story. The acting is quite adequate all the way around, although I have to say that Robert Wilson makes for the most emaciated Jesus I've ever seen. I really liked the framing of the Gospel story from the viewpoint of a Roman centurion, as it lends a certain power to the all-important message of Jesus' sacrifice. Hearing a character outside of Jesus' contemporary followers declare "I beheld His Glory" makes this film particularly memorable to me.

ellisonReviewed in the United States on December 8, 2017
4.0 out of 5 stars
Last Week of Jesus
The story of a Roman soldier who recounts the final week of the life of Jesus to some of his believers who were not in town for the events. Includes the Last Supper, garden betrayal, series of silly trials, burial and resurrection. A good watch.
One person found this helpful
See all reviews
Back to top
Get to Know Us
Make Money with Us
Amazon Payment Products
Let Us Help You
EnglishChoose a language for shopping. United StatesChoose a country/region for shopping.
© 1996-2021, Amazon.com, Inc. or its affiliates