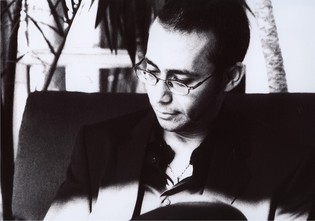 "The Last of the Moon Girls" by Barbara Davis
A novel of secrets, memory, family, and forgiveness by the author of When Never Comes. | Learn more
click to open popover

Being Abbas el Abd is packed with ideas and issues, tackling identity and, especially, adaptation to the contemporary world. --The Complete Review

AHMED ALAIDY, born in 1974, has written satirical stories for young people and currently writes a political comic strip for an Egyptian weekly. HUMPHREY DAVIES is the translator of The Yacoubian Building by Alaa Al Aswany (AUC Press, 2004). He was awarded the 2010 Saif Ghobash–Banipal Prize for Arabic Literary Translation for his translation of Yalo by Elias Khoury.

Start reading Being Abbas el Abd: A Modern Arabic Novel on your Kindle in under a minute.

3.6 out of 5 stars
3.6 out of 5
5 global ratings
How are ratings calculated?
To calculate the overall star rating and percentage breakdown by star, we don’t use a simple average. Instead, our system considers things like how recent a review is and if the reviewer bought the item on Amazon. It also analyzes reviews to verify trustworthiness.
Top reviews

RKT
4.0 out of 5 stars Modern Madness
Reviewed in the United States on April 27, 2014
Verified Purchase
This is a taut, dizzying portrayal of madness. It's personal, psychological madness. But it's also the madness of a lost Egyptian generation. Lacking economic possibilities and disillusioned by bankrupt ideologies--both local and foreign--this is the generation that Abbas el Abd himself calls the "I've-got-nothing-left-to-lose" generation. With a series of twists, turns, and confusions, the reader feels a piece of the soul crushing one must encounter in a modern world that seems to offer so many promises--that pulses, swirls, and shines with seemingly endless possibilities--but whose dazzle is really just a maze of funhouse mirror distortions.

I read the book twice before I felt I was able to put the complex pieces of this story together. But at roughly 130 pages, the second read was hardly time consuming. And it was well worth it. My only regret is that I am unable to read the book in it's original Arabic. After reading the translator's note, it is clear that some of the subtlety and layering has been lost in the shift between languages.

R. Bene
3.0 out of 5 stars Interesting but not satisfying
Reviewed in the United States on November 24, 2014
Verified Purchase
Surprisingly predictable for such a convoluted story. The best part was the translator's note about different levels of Arabic and how to handle them as a translator.
Read more
Helpful
Comment Report abuse

JC
3.0 out of 5 stars Odd book
Reviewed in the United States on July 21, 2013
Verified Purchase
If you do not understand what is going on in the Arab world, and even if you do...This book is kinda odd.
Read more
One person found this helpful
Helpful
Comment Report abuse

Geoffrey Fox
4.0 out of 5 stars Psychotic in Cairo
Reviewed in the United States on January 20, 2013
In a Cairo circa 2003, inhabited entirely by 20-somethings, the narrator -- who may or may not be named Abdullah -- gets into terrible jams and awkward situations thanks to a slovenly roommate named Abbas el Abd, who is either a demonic trickster or a psychotic projection of the narrator himself. Who knows? He certainly doesn't. But in his confusions and anger you get a taste of the consumer anxieties, frustrations -- sexual and also of national pride -- and daily humiliations by those in authority that were a large part of what the masses in Tahrir Square in January of this year (2011) were protesting against, especially the younger ones, and that is a good reason to read this short, chaotic novel. Here's a sample of some of the daily frustrations that might drive a young Cairene nuts:

«Abbas says the utilities shaft of the apartment block is the only place where a man can read the papers in the morning when his wife grudgingly shuts up so as to able to listen to the neighbors quarreling. Episode 7009 of the sitcom "Life," starring my neighbor and his esteemed wife.
...
Click. The Nine O'Clock News. A quick shot: in the market place in Jerusalem an Israeli conscript kicks an old woman in the stomach, and Jaffa oranges fall from her hands and are squashed beneath the huge boots.»

Translator Humphrey Davies has done a complex, acrobatic job rendering Alaidy's mix of classical and colloquial Arabic and newly-minted expressions grabbed from English (al-boyyi frind, for example). His note at the end of the book is well worth reading to put this little book in context.
Read more
5 people found this helpful
Helpful
Comment Report abuse

J. R. Westcott
5.0 out of 5 stars Unlike anything else, except for maybe some things
Reviewed in the United States on October 30, 2006
I highly recommend this new novel out of Cairo. Written by an Iowa Writers Center graduate and so dedicated to his mentor there Chuck Palahniuk, it is a cubist portrait of a mind losing its way--set in the cafe culture of modern Egypt. Dizzying and long-lasting.
Read more
3 people found this helpful
Helpful
Comment Report abuse
See all reviews