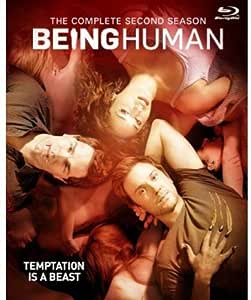 Secure transaction
Your transaction is secure
We work hard to protect your security and privacy. Our payment security system encrypts your information during transmission. We don’t share your credit card details with third-party sellers, and we don’t sell your information to others. Learn more
Details
Ships from
Amazon
Sold by
wpdvd
Return policy: This item is returnable
In most cases, items shipped from Amazon.com may be returned for a full refund.
Read full return policy
Being Human: Season 2 [Bl... has been added to your Cart

Leading everyday lives is harder than it looks for three twenty-something supernatural roommates vampire Aidan (Sam Witwer),ghost Sally (Meaghan Rath) and werewolf Josh(Sam Huntington). Together, they share the creature comforts of a Boston brownstone while struggling to resist the temptations of their true natures and keep their secrets hidden from the outside world. Bonus Features: Season 2 Making-of Featurette, Behind-the-Scenes Interview, Being Human at San Diego Comic-Con 2012.

While some young, attractive supernatural entities lead the most interesting lives, the day-to-day just isn't getting easier for the three monsters-in-twentysomethings' clothes of Being Human, as this second-season set clearly illustrates. If the first season offered an undead version of how young people make their first steps toward adulthood, the sophomore season presents a similar take on the consequences of rash decisions and difficult circumstances. Vampire Aidan (Sam Witwer), having assumed control of Boston's bloodsucking population by eliminating his rival, must contend with not only a powerful vampire queen named Mother (Deena Aziz) but also her daughter, Suren (Dichen Lachman), who enlists Aidan in her power grab for the throne. Meanwhile, werewolf Josh (Sam Huntington) struggles to take responsibility for inflicting his curse on girlfriend Nora (Kristen Hager), which requires a particularly terminal solution. The ghostly Sally (Meaghan Rath) is once again relegated to a second-string storyline, despite the major revelation regarding her demise at the end of the previous season; her path to resolving that situation takes a roundabout route as Sally learns to inhabit the bodies of living people while also finding her way in a community of spirits lurking at the hospital where Aidan and Josh work. The story arcs laid out for each character grow more compelling with each episode and help to keep the program out of the sudsy, heavy-handed territory that on occasion threatens to overtake the show's unique premise, as do occasional touches of humor, most notably in Sally's storyline. Whether Being Human can maintain this balancing act between horror tropes and the requirements of episodic drama in subsequent seasons remains to be seen, but its second season certainly indicates that the show's creators have the means of making it work. The four-disc Blu-ray set includes an hour-plus making-of featurette that echoes the one found on the first-season set in regard to cast and crew interviews, though fewer glimpses behind the scenes are offered; the show's panel at the 2012 Comic-Con and a brief talk with executive producers Anna Fricke and coproducer Jeremy Carver are mostly for diehard fans. --Paul Gaita

4.9 out of 5 stars
4.9 out of 5
669 global ratings
How are ratings calculated?
To calculate the overall star rating and percentage breakdown by star, we don’t use a simple average. Instead, our system considers things like how recent a review is and if the reviewer bought the item on Amazon. It also analyzes reviews to verify trustworthiness.

Julie Michael
5.0 out of 5 stars Great Series
Reviewed in the United States on June 29, 2020
Verified Purchase
A vampire, a werewolf, and a ghost get a house together. I know it sounds like a bad joke but be assured this series is amazing. It was unfortunate that they stopped after four seasons. The characters and story-line never disappoint! Highly recommend!
Read more
2 people found this helpful
Helpful
Report abuse

Liane Jaeger
5.0 out of 5 stars good translation from the bbc version
Reviewed in the United States on June 15, 2013
Verified Purchase
I'm a huge fan of the BBC version of the show, and I've seen a lot of responses to the SYFY version from others BBC fans, and they aren't very nice. I think SYFY did a tremendous job taking the original concept and readapting it to American television. The first season was very similar to the BBC's first, but in the second season they veer off, and it's so well done. The viewers see the characters branching out and dealing with the fallout from season one, and we really see them develop and adapt to rapidly changing situations. The actors are amazing, and you really beleive them as the characters. I think it's well done, the acting is great, the writing is great, and effects are wonderful.
Read more
4 people found this helpful
Helpful
Report abuse

Eric Jude
5.0 out of 5 stars Happy With Purchase
Reviewed in the United States on January 2, 2017
Verified Purchase
I bought this as a present. This is not a review of the TV show - This is a review of the order, the physical product, etc. The show is well enough made, but any review of it is speculative, based on point of view. I ordered this shortly before Christmas 2016 and it arrived in a timely manner, before the holiday. There was no damage, in the mailer or on the DVD. The DVD is well made, from the case to the menu. I give this order 5 stars I was very happy with this purchase.
Read more
Helpful
Report abuse

USGEMGIRL
5.0 out of 5 stars Love it
Reviewed in the United States on May 22, 2014
Verified Purchase
I love Being Human. One of the great things is the combination of "souls" living this convoluted lifestyle, together. Their single and combines situations are well thought out and solutions to their problems are on the edge of morality, what is the right or the wrong of things? It is all subjective, depends on where you stand. And depending on where YOU stand, you can enjoy the superficial story or perceive the deeper meanings contrived. As always, this is just my opinion, you must decide for yourself.
Read more
Helpful
Report abuse

Steven Epley
5.0 out of 5 stars Steve's Review
Reviewed in the United States on February 18, 2013
Verified Purchase
This is one of the best series that the Sy Fy channel has ever developed. It is based on a BBC series of the same name (check it out too) but with a distinctly American flavor. Basically it is about a vampire, ghost, and werewolf that all live together. All are attempting to stay in touch with whatever humanity they have left since they are basically all monsters and know it. I started watching this series when it first came out and I buy each season as it becomes available. If you are into horror and humor then check it out, this show has both!
Read more
2 people found this helpful
Helpful
Report abuse

Pebbles
5.0 out of 5 stars Wonderfully entertaining & enlightening!
Reviewed in the United States on December 31, 2012
Verified Purchase
I really enjoyed season 2. We got to know the characters & a little about their back stories in season 1. Season 2 gives an even deeper look into their past & how it shapes their present & future. I enjoy all the main characters. This show gives us all a closer look into what it truly takes to be a human being in this world. It shows us it is no easy job no matter who or what we are & each of us have to deal with our own issues, but we are all looking for someone to understand. Great show!!
Read more
5 people found this helpful
Helpful
Report abuse

the og one
5.0 out of 5 stars Good Story, Not Typical/Predictable Like True Blood
Reviewed in the United States on June 5, 2014
Verified Purchase
Much more interesting than True Blood. My favorite charachter has to be Sally though, she has the most interesting story and there is so much to explore with her storyline. Was really frustrated that Syfy cancelled after 4th season. Why is Syfy so stupid? Just like AMC they cancel really great shows (like the Killing). Then they screw the writers over so they have to come to some abrupt conclusion which isn't true to the creation of the story.
Read more
Helpful
Report abuse

Cmz
5.0 out of 5 stars Love this show
Reviewed in the United States on January 30, 2019
Verified Purchase
Second season is better then the first. Great development of characters.
Read more
One person found this helpful
Helpful
Report abuse
See all reviews

Siobhan Dawson
5.0 out of 5 stars Supernatural
Reviewed in the United Kingdom on May 19, 2013
Verified Purchase
Love this show, both Brirish and American. I think Season 2 is a lot better than Season 1 because it seems to have it's own original story where are as Season 1 had a story line that was idential to the British version.
Read more
One person found this helpful
Report abuse

Tommy K
5.0 out of 5 stars I loved this show
Reviewed in Canada on September 19, 2016
Verified Purchase
I loved this show, I had season 1 and didn't have season 2 and 3 so I decided to order it. Great buy, must be the edited version because there are some lines that are missing on this season. You already watched it on tv, its almost exactly like it apart from a few cut scenes
Read more
Report abuse