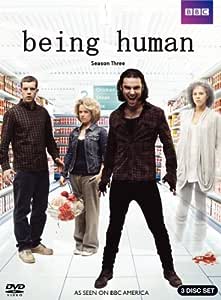 Hot on the heels of the SyFy Channel’s American remake, the original UK Being Human returns to DVD and Blu-ray for a third gripping season. Leaving the memories of their much-loved former house behind, George, Nina, and Mitchell settle into their new home - a kitschy B&B named Honolulu Heights that boasts many benefits for supernatural types...a large basement providing safe haven on a full moon, for starters. Season three boasts an impressive array of guest-stars, including Lacey Turner (EastEnders) as Lia, who Mitchell meets in Purgatory, Robson Green (Wire In The Blood) as primitive werewolf McNair, Michael Socha (This Is England '86) as McNair's son Tom, Paul Kaye (It's All Gone Pete Tong) as twisted vampire Vincent, Craig Roberts (Young Dracula) as teenage vampire Adam; Nicola Walker (MI-5) as social worker Wendy, James Fleet (The Vicar of Dibley) as George's father; and Jason Watkins making an eventful return as vampire leader Herrick.

The supernatural emo-goth odd-trio (now a quartet) series returns! Season three of Being Human starts with Mitchell the dashing vampire (Aidan Turner), George the goofy werewolf (Russell Tovey), and Annie the chipper ghost (Lenora Crichlow)--along with Nina, another werewolf, not so goofy (Sinead Keenan)--all moving to an abandoned, Hawaiian-themed bed-and-breakfast in Wales to avoid some trouble they'd gotten into back in Bristol. But trouble won't leave them alone, and soon they're grappling with a father-son team of vampire hunters (who are also werewolves), zombies, vengeful spirits, underground werewolf fights, dead parents, vampire groupies, the revivification of an old foe, and most frightening of all, an unplanned pregnancy. For some viewers, part of the appeal of Being Human is that everyone has the emotional life of an overwrought teenager, jumping around for joy one minute and weeping copiously the next, wrestling passionately with incoherent moral issues, and generally behaving in a confused and emotionally wounded way (it might be some kind of meta-joke when the protagonists discover an actual teenage vampire who seems more mature than they are). The lack of consistent rules for supernatural behavior continues from previous seasons but is particularly annoying here, as a major plot element revolves around Annie being unable to do certain physical things… even though she can kiss and hug and make tea, among other things (also, the poltergeist powers she displayed in previous seasons seem to have fallen by the wayside). But there's plenty of action--the eight episodes are crammed with both violence and dramatic doings--and the characters will appeal to fans as much as ever. Extras include deleted scenes and interviews with the cast. --Bret Fetzer

Page 1 of 1 Start overPage 1 of 1
This shopping feature will continue to load items when the Enter key is pressed. In order to navigate out of this carousel please use your heading shortcut key to navigate to the next or previous heading.
Back
Next
Pages with related products. See and discover other items: the fall series