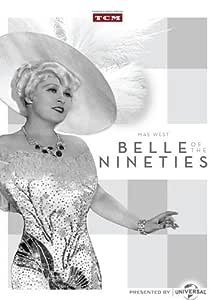 Belle of the Nineties

3.9 out of 5 stars
3.9 out of 5
44 global ratings
How are ratings calculated?
To calculate the overall star rating and percentage breakdown by star, we don’t use a simple average. Instead, our system considers things like how recent a review is and if the reviewer bought the item on Amazon. It also analyzes reviews to verify trustworthiness.
Top reviews

Michael Prunty
5.0 out of 5 stars Viva Mae West!
Reviewed in the United States on December 3, 2013
Verified Purchase
Enjoyed this film begining to end. Why?
One: Mae West, truly the "Belle of the Ages". She has the talent, the charm, and the style to be risque without being vulgar and yet she was censured. Modern Hollywood garbage mouths, can you say Conyea (sic) have no clue as to what being classy is all about and yet their suppose to be talented stars.
Two: I like almost all of Johnny Mack Brown's films and he's in this one as is one of his sidekicks Fuzzy Knight, another great comedian.
Three: She wrote the script for this one after the Production Code (censorship) was put into effect yet the film grossed enough money it saved Paramount Studios from bankrupsey and she made a serious bundle for herself, all before woman's lib.
Four: Great music in the film and Duke Ellington on the piano is a pleasure to listen to.
Five: Plot is not spellbinding unless your on edge to see or hear what Miss West does next but for a 70 minute film it will keep your attention.
Six: She's Irish Catholic on her father's side and German Protestant on her mother's side, just like me.
Everything else is Mae West, Mae West, May West (Kim Kardashian eat your heart out, you have NO talent) seriously, what does she do to be remotely famous.
Viva Mae West! She should have been picked for the role of Scarlett O'Hara. I can hear her now telling Clark Gable as she stands on the stairway, "Frankly my dear, I don't give a hoot".

E. Valero
5.0 out of 5 stars Entertaining West Vehicle. Never dull and full of body.
Reviewed in the United States on August 3, 2005
Verified Purchase
West plays a flamboyant singer Ruby Carter who after breaking up with her boxer boyfriend, takes a job singing at a fashionable club in New Orleans. She quickly becomes the object of desire for the area's male population and an object of envy and scorn by one of the females.

Mae West is splendidly dressed thoughout with over the top plumes, hat's, jewels and form fitting gowns. Despite her age and size, she's quite an eye-catcher and her charming, sex-crazed personality intrigues and delights. She also sings much loved tunes such as MY OLD FLAME and ST LOUIS WOMAN backed by Duke Ellington and his orchestra.

Mae West's one-liners and innuendos were toned-down and they were no where near as sexual as in her first starring feature SHE DONE HIM WRONG. The Production Code that came in effect at around this time was pretty strict and as a result, this film was said to have been heavily edited. Some of Mae's best lines were left out and the original title IT AIN'T NO SIN was changed to the more inoffensive BELLE OF THE NINETIES. Despite all this, BELLE OF THE NINETIES still offers some of her best dialogue and witty one-liners.

When West is asked "What type of men you prefer?". She replies "Only two. Domestic and foreign."

When John Miljan goes to greet her as she exits her boat, Mae (as usual) is surrounded by men. "Take care of these men" says Miljan. Mae adds, "Yes, give them all my address."

When one of her male admirers states "Ruby I must have you. Your golden hair, your fascinating smile, your lovely arms, your form, devine". She quickly quips "What is this a proposal or are you taking inventory?."

And even her maid get's some useful advice when West tells her "Don't let a man ever put anything over on you outside of an umbrella."

And one of her best lines "Better to be looked over than over-looked" is featured here.

The curvacious blonde is all style, all substance and originality and her lines are performed with a sexual "purr" that would have even Catwoman taking notes. BELLE OF THE NINETIES is one of Mae West's most entertaining flicks. It's blown-up, brazen and pleasurable. Just like the lady herself.
Read more
4 people found this helpful
Helpful
Comment Report abuse

Donald Motley
1.0 out of 5 stars Beware of the TCM DVD-R
Reviewed in the United States on August 17, 2018
Verified Purchase
My copy of the TCM DVD-R from Universal is defective and doesn't play properly. If I had it to do over again, I would spend a little more and get the Universal DVD from Image.
Read more
Helpful
Comment Report abuse

Pablo A Calvan
4.0 out of 5 stars Worth the price.
Reviewed in the United States on October 16, 2019
Verified Purchase
Mae West is great.
Read more
Helpful
Comment Report abuse

bluestategirl
1.0 out of 5 stars Why is Amazon selling something that doesn't work?
Reviewed in the United States on July 8, 2014
Verified Purchase
Didn't work! We live in Vermont, so the code on this DVD should have worked in our player, but like others here, it didn't work. We're really disappointed since we recently watched this on TCM and fell in love with all the Duke Ellington songs she sang.

Harold E. Niver
5.0 out of 5 stars She was one-of-a-kind!
Reviewed in the United States on November 21, 2015
Verified Purchase
My wife actually had the distinction of having Mae West push her in a baby carriage! Ms. West had relatives living on the same street as my wife and would occasionally encounter her. Ms. West was one of a kind. This movie is fun-filled and nostalgic.
Read more
One person found this helpful
Helpful
Comment Report abuse

Searchingfor?
5.0 out of 5 stars A Mae West Sparkler
Reviewed in the United States on December 12, 2013
Verified Purchase
I love Mae West films and this one is trip. The costumes are stunning and the songs interesting. It is a Mae West mesmerizer - written by her. It begins with tableaus of her against a butterfly, bat, and spider background and as a statue of Liberty. Some of her most famous lines are in this one - "He is so low, he can walk under that door without taking off his hat." It is about the adventures of a singer who goes to New Orleans from St. Louis, Missouri - "I'm from Missouri, and you know what means." Excellent film quality.
Read more
One person found this helpful
Helpful
Comment Report abuse

red
4.0 out of 5 stars Four Stars
Reviewed in the United States on January 14, 2018
Verified Purchase
One of mae west lesser movies but it is still Mae west and she saves the movie
Read more
Helpful
Comment Report abuse
See all reviews

SB
5.0 out of 5 stars Why don't you come up and see me sometime!
Reviewed in the United Kingdom on April 8, 2016
Verified Purchase
Mae West in this classic flick about a Music Hall singer. It involves Lust, Love and hate and will become a classic you will love to come back to again and again.
Read more
Report abuse

Roy Bell
5.0 out of 5 stars Five Stars
Reviewed in the United Kingdom on November 9, 2015
Verified Purchase
another for the fans
Read more
Report abuse

Page 1 of 1 Start overPage 1 of 1
This shopping feature will continue to load items when the Enter key is pressed. In order to navigate out of this carousel please use your heading shortcut key to navigate to the next or previous heading.
Back
Next
Pages with related products. See and discover other items: mae west movies, mae west