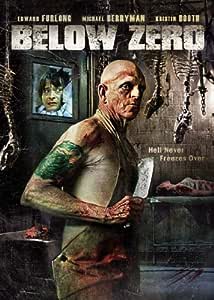 Trapped in an abandoned slaughterhouse, a desperate screenwriter paralyzed by writer's block is tormented by a horrific serial killer of his own creation. Locked in a freezer, he sinks into a claustrophobia-induced paranoia, where he can't distinguish what is real from what is written, with his life hanging on every page. Horrifically mind bending, Below Zero is a terrifying tale that will have you guessing until final chapter.

3.4 out of 5 stars
3.4 out of 5
22 customer ratings
How does Amazon calculate star ratings?
Amazon calculates a product’s star ratings based on a machine learned model instead of a raw data average. The model takes into account factors including the age of a rating, whether the ratings are from verified purchasers, and factors that establish reviewer trustworthiness.
Top Reviews

AmazonCustomers
5.0 out of 5 stars You Won't Guess The Ending!
Reviewed in the United States on December 16, 2012
Verified Purchase
This is not the kind of film you want to watch on a dark and stormy night alone. It has all of the elements of visual horror, but it is the mental horror that will make you want to immediately get out of the house and have a cup of coffee in a very large crowded mall until sunrise.

Trust me, you will never walk into a cold storage locker again. Or any walk-in refrigerator after watching this movie. I was not claustrophobic before this movie, but now I yearn for the wide open desert.

And did I mention the twist at the end? You won't see it coming.

Five Stars for an extremely well written script, and scaring the bejabbers out of me.

Mark S
5.0 out of 5 stars great!
Reviewed in the United States on February 20, 2015
Verified Purchase
Im not a horror thriller guy, but this was intersting as heck, really not goary, and multiple twisted plot.
Read more
Helpful
Comment Report abuse

S. R.
3.0 out of 5 stars A bit disappointed...
Reviewed in the United States on January 12, 2013
Verified Purchase
I didn't expect much from "Below Zero" and I didn`t get much.
I found it quite boring.
But I have to say it`s a unique movie.
I love Edward Furlong which is why I had to get this one-
The story seems to be so interesting, but the movie itself just didn`t "get me"
The ending was very confusing...

If you`re a fan of Edward Furlong you should see it,
otherwise don`t.
Read more
One person found this helpful
Helpful
Comment Report abuse

goredsox
5.0 out of 5 stars Great Indie Film with Big Budget Feel
Reviewed in the United States on October 22, 2012
Verified Purchase
I truly enjoyed this film and would recommend it for any horror/thriller genre film enthusiast. It's a creative story that makes you think and the acting is very well done. I was particular pleased with Kristen Booth's performance as she really shows her range of talent in this role. I highly recommend BELOW ZERO!
Read more
3 people found this helpful
Helpful
Comment Report abuse

Robert Beveridge
HALL OF FAMEVINE VOICE
2.0 out of 5 stars Negative Kelvin.
Reviewed in the United States on December 13, 2013
Below Zero (Justin Thomas Ostensen, 2011)

An hour into Justin Thomas Ostensen's first fictional feature, Below Zero, I was ready to sing the movie's praises. It was Edward Furlong's best work since American History X, the first scene with Michael Berryman was so well-done it gave me shivers, and Ostensen and screenwriter Signe Olynyk, a TV writer working on her first big-screen presentation, were doing a bang-up job at keeping the parallel time structures in hand, keeping fantasy separated from reality without stupid “fuzzy camera” tricks, the works. This is a movie that had every hallmark of “you totally ignored this when it first came out and so I'm going to natter on about it to you endlessly until you sit down and watch it just to shut me up.”

And then... the cliff raced up, and the movie didn't even attempt to swerve.

Plot: Jack (Furlong), a screenwriter who had one big hit and then suffered a tremendous case of writers' block, has been sent by his agent to a farm in the middle of nowhere owned by Penny (Kristin Booth, who previously worked with Furlong in Detroit Rock City) and her autistic son, who takes a liking to Jack from the get-go. The goal: Penny will lock Jack in the farm's meat locker for five days to break his writer's block. (Jack's agent has given Penny a few other instructions Jack doesn't know about, it seems, and they are revealed over the course of the movie, leading to some freaky-yet-hilarious scenes.) Initially, it seems like it's working; Jack takes some of the things he and Penny experienced on the drive to the farm, conjures up a resident butcher for the farm named Gunnar (Berryman), and writes some really good stuff. And then... smack, there's the wall. Penny starts dropping in regularly with coffee, and of course she's written a script she wants Jack to look at, but the old joke turns out to have some legs, as Jack and Penny bounce ideas off one another, and Jack's script gets back on track. But nothing is ever as easy as it seems...

There is so much to love about this movie. If I could pinpoint the moment where I could say “turn it off here and just imagine the ending”, I'd tell you to do that, because the first hour and change of this movie is well worth your time. This could have been the path to redemption for Edward Furlong's career that a handful of movies in the past decade tried to be and, ultimately, failed for some reason or other (usually because they suck, viz. Intermedio). For that matter, it could have been Michael Berryman's highest-profile performance since The Hills Have Eyes. Berryman is a very good actor when someone gives him a script that's got enough meat on the bone for him to sink his teeth into it, and it shows here better than, perhaps, it ever has; the portions of this film containing Berryman are its best. I won't go so far as to say he's the only thing about the movie worth the price of admission—there's enough good in the rest of the first hour to keep you satisfied even when he's not on screen—but if you're used to seeing Berryman in bit parts and schlock like Brutal, prepare to be very pleasantly surprised. If only they hadn't managed to completely blow the ending. **
Read more
Helpful
Comment Report abuse

That Review Person
4.0 out of 5 stars "Below Zero Above Average"
Reviewed in the United States on November 25, 2012
I didn't expect much from "Below Zero" and actually anticipated a below average movie but was pleasantly surprised by how this film played out in the end. Edward Furlong does a nice job as the main character, a writer with writers block who's agent has set up a week in the country to help get his creative juices flowing again with a little twist. At first I was skeptical thinking this to be an average movie about a writer writing a story with the scenes being shown to us as he types them but than I was surprised by the twists that will have you like "huh" at first, than "wow" afterwards.

As I stated, Edward Furlong is the writer trying to create his next body of work, his agent sets him up in the country at a slaughterhouse with a goofy country woman and her very quite son. Once acquainted with his new surroundings he is locked up in a meat locker for 5 days thanks to a deal his agent made with the woman to help get his creative juices flowing again. As he starts writing, his story takes shape with a tow truck driver who crashes and finds a slaughterhouse where he looks for help but instead gets accidentally locked in the meat locker of a serial killer. We see each scene play out, twist and change as he writes them while events start happening around and outside of his room an slaughterhouse that will help change the out come of the movie and story being written.

I enjoyed "Below Zero" and found the small cast to be quite good, Edward Furlong looks and acts better than the last time I saw him which was in "Night of the Demons". The twists and ending were actually quite nice and made me glad I took the time to check this film out. Overall I think "Below Zero" is a nice little indie gem that most people will be enable to enjoy in the end.
Read more
Helpful
Comment Report abuse
See all reviews from the United States

julie f
1.0 out of 5 stars Below zero should be the rating
Reviewed in the United Kingdom on November 11, 2017
Verified Purchase
This movie has wooden acting , a frozen plot and annoying characters . It looks cheap , feels cheap and should be cheap . Don't waste your time or money . Instead invest in A SIMPLE PLAN which is far superior . NUFF SAID .
Read more
Helpful
Sending feedback...
Thank you for your feedback.
Sorry, we failed to record your vote. Please try again
Report abuse