Add to Cart
$28.18
& FREE Shipping on eligible orders. Details
Sold by: Amazon.com
Have one to sell?
Sell on Amazon 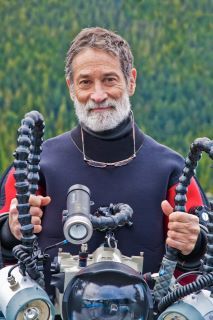 Beneath Cold Seas: The Underwater Wilderness of the Pacific Northwest Paperback – Illustrated, March 9, 2015

"Dispelling the myth that cold, murky waters equal boring waters, Hall has captured the staggering beauty and variety of marine life found in the Pacific Northwest. Although the animals themselves are truly amazing, it is Hall's creative eye and masterful photographic technique that really sets this book apart."―Jemima Greaves, Outdoor Photography Magazine

"Hall has consistently managed to capture patterns, textures and colors . . . as if they were created on an easel. David Hall is an inspirational master who clearly hasn't yet gotten all of the recognition that he deserves."―Peter Symes, X-ray Magazine

"Hall's images - which, at times, appear to be photographs of life on another planet - reflect not just the amazing diversity of sea life in local waters, but also the spectacular carnival of colors hidden just below the surface."―Brangien Davis, Seattle Magazine, December 2011

"He depicts our underwater world in a way that will amaze scuba divers and art lovers alike."―Tracey Sherlock, Vancouver Sun, December 2011

"One of the most impressive photography books we've seen in a long time."―Ask_Kelly's Blog, OhRanger.com, August 2012

"The level of consistency and standard of imagery is quite exceptional and it captures the wild spirit of this corner of the planet page after page. . . . It is difficult to imagine that there will ever be a better collection of photographs to come out of this area."―Peter Rowlands, Underwater Photography, January 2012

"This book is a work of art from every possible angle - from the exquisite photographs, to the book's design, to its flawless printing and production process. . . . Hall has everything right in this book. There is nothing extraneous, and nothing missing. This is a complete and moving immersion in the breathtaking underwater world of the Pacific Northwest."―National Outdoor Book Award Foundation, winner for Design and Artistic Merit

"This book offers a fascinating view of the cold-water ecosystem of the Pacific Northwest and artistically illuminates the intriguing underwater world. Hall's images celebrate and explore the amazing diversity found in this valuable and vulnerable ecosystem."―Jenny Montgomery, Photo Life, January 2012

"Using state-of-the-art equipment, innovative techniques and electronic strobes, David Hall shows up an underwater world surprising to those who think color and diversity belong to the tropics."―Marilyn Dahl, ShelfAwareness, December 2011

"You will never look at the slate-gray waters of Puget Sound with the same eyes after perusing these photos."―Mary Ann Gwinn, Seattle Times, December 2011

"An exuberant celebration of northwest coast marine life said to be the most diverse and spectacular of any coldwater ecosystem on the planet."―Diver, May 2012

"David Hall's superb images come from one of the most unlikely underwater venues, the Pacific Northwest, where the waters are frigid and often clouded with phytoplankton. . . . Yet these photographs are filled with subtle coloration, and so uniquely composed that you are often left wondering how he did it."―Laurence A. Marschall, Natural History, November 2013

"What's most striking about the book is the color and vibrance that photographer David Hall was able to capture. It's a bit mind-blowing to imagine that hooded nudibranches and grasping octopi found in the book live in the inky depths abutting our very own rocky shores."―Mirissa Neff, San Francisco Bay Guardian, April 2012

"Hall's writing is as eloquent as his full-color photos, with touching vignettes about his curiosity for and experiences shooting crabs, jellyfish, nudibranchs and octopi, and why he goes to such physical extremes to get these cold-water critters on camera."―Undercurrent, February 2012

"From brilliant anemones to illuminated squid to rococo sea slugs, Hall has documented an Aladdin's Cave worth of visual wonders."―Bensozia, January 2012

"Oh, what photos! . . . Hall showcases the arrays of magnificent nudibranches, intricately patterned chitons and colorful sea stars. At the other end of the spectrum, he reveals the remarkable camouflage of octopi and other creatures."―Barbara Lloyd McMichael, The Bellingham Herald, December 2011

"A visual feast of Pacific Northwest sea life served with a science lesson on the side. Hall captures personality and emotion where you least expect it."―Brian Colella, Seattle Met, November 2011

"An incredible photographic showcase of marine life of the Pacific Northwest, Beneath Cold Seas offers spectacular imagery of the undersea world in our region. Numerous amazing images are accompanied by interesting text that explains the images and the challenges of high-end photography in the frigid waters of the Pacific Northwest."―Peter G. Williams, Out There Monthly

"Cayman Islands, pffft. Hall's stunning photographs of life beneath the waters of the Pacific Northwest show that cold waters are every bit as luridly colorful as their more temperate counterparts."―Steve Casmiro, Adventure Journal

"With Beneath Cold Seas, David Hall highlights his work in the frigid waters of the Pacific Northwest, home of the diverse and visually spectacular marine life of this cold-water ecosystem. From tiny, candy-striped shrimp to giant Pacific octopus, rockfish schooling among kelp to orchid sea stars, Hall's stunning photographs reveal both the symbiotic and predatory relationships that can be found in these waters."―e-Morfes

"David Hall shoots with the inquiring and exacting eye of a scientist yet the soul and vision of an artist, combining the two to produce uniquely beautiful underwater images that educate as much as they inspire."―Christopher Newbert, author of Within a Rainbowed Sea

David Hall is an award-winning photographer and photojournalist with an international reputation whose work has been published in magazines such as National Geographic, Smithsonian, Natural History, Time, BBC Wildlife, Geo, and Terre Sauvage. He is the coauthor of ten children's books in Scholastic's Undersea Encounters series and coauthor of the scientific paper describing the famous "psychedelic frogfish," for which he received an award from the International Institute for Species Exploration.
Read more

DAVID SALVATORI
5.0 out of 5 stars A masterpiece!
Reviewed in the United States on August 3, 2017
Verified Purchase
A masterpiece of underwater photography narrating about Pacific Northwest sea. Really great images, collected and selected by the author during his 12 trips in the area
Read more
Helpful
Comment Report abuse

nan
5.0 out of 5 stars Beautiful and Informative
Reviewed in the United States on May 18, 2015
Verified Purchase
I have a copy and this is a gift
Read more
One person found this helpful
Helpful
Comment Report abuse
See all reviews

Page 1 of 1 Start overPage 1 of 1
This shopping feature will continue to load items when the Enter key is pressed. In order to navigate out of this carousel please use your heading shortcut key to navigate to the next or previous heading.
Back
Next
Pages with related products. See and discover other items: under the ocean