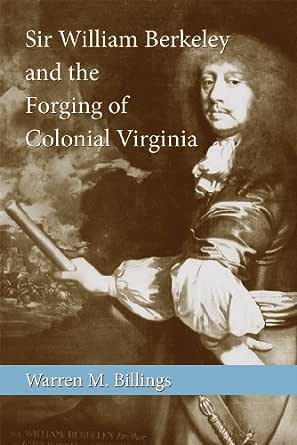 Flip to back Flip to front
Audible Sample Playing... Paused   You are listening to a sample of the Audible narration for this Kindle book.
Learn more
ISBN-13: 978-0807134436
ISBN-10: 0807134430
Why is ISBN important?
ISBN
This bar-code number lets you verify that you're getting exactly the right version or edition of a book. The 13-digit and 10-digit formats both work.

Sir William Berkeley (1605--1677) influenced colonial Virginia more than any other man of his era, diversifying Virginia's trade with international markets, serving as a model for the planter aristocracy, and helping to establish American self-rule. An Oxford-educated playwright, soldier, and diplomat, Berkeley won appointment as governor of Virginia in 1641 after a decade in the court of King Charles I. Between his arrival in Jamestown and his death, Berkeley became Virginia's leading politician and planter, indelibly stamping his ambitions, accomplishments, and, ultimately, his failures upon the colony. In this masterly biography, Warren M. Billings offers the first full-scale treatment of Berkeley's life, revealing the extent to which Berkeley shaped early Virginia and linking his career to the wider context of seventeenth-century Anglo-American history.

Warren M. Billings is Distinguished Professor of History at the University of New Orleans and the author or editor of many books, including A Little Parliament: The Virginia General Assembly in the Seventeenth Century and A Law Unto Itself: Essays in the New Louisiana History. He is director and editor of the Papers of Sir William Berkeley Project, chairman of the Association for the Preservation of Virginia Antiquities’ Jamestown Rediscovery Archaeological Project Advisory Board, and historian of the Supreme Court of Louisiana. --This text refers to an alternate kindle_edition edition.
Read more