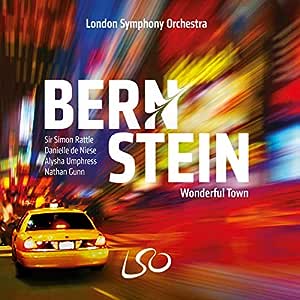 Sir Simon Rattle and the London Symphony Orchestra pay homage to Leonard Bernstein with a recording of Wonderful Town that captures the energy and excitement of sold-out performances from December 2017. Featuring an all-star cast led by Danielle de Niese and Alysha Umphress, this release coincides with worldwide Bernstein At 100 celebrations marking the centenary of the LSO's former president. Bernstein's five-time Tony award-winning musical follows sisters Ruth and Eileen on their quest to make it big, pursuing careers in writing and acting from their cramped basement apartment in New York's Greenwich Village. Fresh from rural Ohio, the sisters end up getting more than they bargained for, realizing that life in the Big Apple is not as glamorous as it may seem. A bright and cheery love letter to the city that never sleeps and the colorful characters inhabiting it, Wonderful Town draws on Fields and Chodorov's 1940 play My Sister Eileen, which itself is based on a series of autobiographical short stories by the 'real-life' Ruth McKenney. Bernstein's infectious score includes classic numbers such as ''Ohio,'' ''One Hundred Easy Ways,'' and ''A Little Bit in Love,'' as well as a riotous conga that had delighted audiences dancing in the aisles of the Barbican hall.

HannibalTop Contributor: Classical Music
3.0 out of 5 stars Rattle's Doomed Attempt to Revive Wonderful Town
Reviewed in the United States on October 18, 2018
Verified Purchase
Clearly Simon Rattle is very fond of this delightful musical by Leonard Bernstein and Comden & Green as he has recorded it more than anyone else! (3 times) - But despite the advantage of recording it this time in SACD with the London Symphony Orchestra with a decent cast, he doesn't pull it off. I hope you'll believe me that this marvelous show (which I saw live on Broadway in my youth) simply doesn't come alive as the original cast album does of that production, nor do the other recordings which have been attempted more recently. It's hopeless.

Reason: first and foremost: the inimitable Rosalind Russell and the music directed by Lehman Engel (dare one guess with LB looking over his shoulder)? They created a magic on that recording which none other can match - and that includes this latest attempt. It goes without saying Roz Russell sets a standard which cannot be equaled let alone be beat. This one's a nice try, but the original cast recording is the one to own and treasure.

JFD
5.0 out of 5 stars Classic!
Reviewed in the United States on October 30, 2018
Verified Purchase
He was the master for this kind of fine orchestral musical theater
Great cast too

G.C.
3.0 out of 5 stars OK recording of "Wonderful Town", where the orchestra is the star
Reviewed in the United States on September 13, 2018
Simon Rattle clearly has a thing for "Wonderful Town", as this new LSO Live album marks his 3rd recording, in various formats, of this classic Adolph Green/Betty Comden/Leonard Bernstein musical. In fact, each of Rattle's recordings is connected to his most recent major positions, with his first, audio, recording with the Birmingham Contemporary Music Group (which was an offshoot of the City of Birmingham Symphony Orchestra), and his second, DVD, recording with the Berlin Philharmonic Orchestra. So this new album marks something of a baptism with the London Symphony Orchestra, where Rattle is music director as of the 2017-2018 season. This recording is connected to the LSO's "Half Six Fix" rush-hour concert series, specifically a December 21, 2017 live performance of "Wonderful Town" at the Barbican Centre, quite the early Christmas present for that audience in London.

The LSO is, in fact, the very best thing about this recording. The LSO adopts the flexible, not too rigid American musical theater style easily, yet also gives diamond-sharp ensemble playing where it's called for, such as in Bernstein's recycling of his "Prelude, Fugue and Riffs" in the 'Conquering New York' number.

The three lead singers are all American, Alysha Umphress as Ruth, Danielle de Niese (strictly speaking, Australian-born, US-raised) as Eileen, and Nathan Gunn as Bob Baker. Umphress is from the world of Broadway, while de Niese and Gunn are from the classical music side. Umphress can certainly do Broadway brassy and outgoing (such as on a video of "I Can Cook, Too", from another Bernstein musical, available on the NYT website with some searching). Yet here, while she sings well, she seems very subdued, as if trying very hard not to be overly brash. She also goes out of her way to seem consciously "stiff" in the sidewalk advertising lyrics for the Village Vortex, in character as Ruth.

Gunn and de Niese also sing well, no big surprises there, given their own individual strong musicianship. Perhaps de Niese doesn't have quite the relaxed charm in 'A Little Bit in Love' like Edie Adams from the original 1950's cast recording, but that is a matter of personal taste. Gunn does the jaded cynicism of Bob Baker's character rather better than Thomas Hampson in the BCMG recording

All the other singers are British, and adopt reasonably decent American accents, including the London Symphony Chorus. However, with the Brit singers, this doesn't always translate to effective characterization. One particular instance is Wreck, sung by Duncan Rock, who doubles as Wreck and the Second Associate Editor. Rock does fine disillusionment in 'What a Waste', but is just too smart-sounding to embody the dumb, if lovable, lug that is Wreck in 'Pass the Football'.

For a recording nominally centered around the live December 2017 concert, the sound and atmosphere have rather little feeling of a live performance, IMHO. This actually hasn't been too surprising, given this similar nature in several LSO Live recordings that this reviewer has heard. This unwittingly comes further into play in the bonus track, a reprise of the Act I-closing 'Conga!', which has audience participation and general raucousness in the background, as well as applause at the end. In all the main numbers, no applause occurs after the end of each number. You can read into that as you see fit.

In sum, as a recording of this score, it's not bad at all. On a technical level, it's actually very good. And, in all honesty, most studio recordings of Broadway shows have that slightly antiseptic "studio" feel, as opposed to hearing that show live in the theater, at least IMHO. It's just that, with a recording that is supposed to be taken from a live performance, this reviewer was hoping for a bit more pizzazz and charge in the singing. Your own opinions will differ, of course. If you want to support the LSO Live label and these artists by purchasing this recording, then certainly have at it.

William S. Oser
2.0 out of 5 stars Redundant
Reviewed in the United States on October 31, 2018
Sir Simon Rattle is not a Broadway Baby. I dare say he has never resided within 5 or 6 miles of Times Square, so Wonderful Town and he are not an obvious match made in heaven. I have lived with his earlier CD recording, primarily because of its matchless cast. I am a huge Kim Criswell fan and Audra friggin' McDonald as Eileen? Holy Cow! She can align one of her Tony awards with each of the songs she is featured in. These two have enough Broadway chops to offset Rattle's lack of same. On this recording we substitute Alysha Umphress, recently of the Broadway revival of On the Town and Danielle de Niese from the world of opera, not a really good tradeoff. On the male side we have Thomas Hampson (older recording) vs. Nathan Gunn, pretty much a tie and then Brett Barrett vs. Duncan Rock singing Pass That Football. Barrett wins by several field goals in what is no contest. The problems keep showing up in Rattle's eccentric conducting. The style is not coursing through his veins and we get so many quick moments when things don't quite come out right, balances not quite what they should be, too much detailing where it should all blend differently. Umphress scored big in On the Town and she should do as much here, especially in One Hundred Easy Ways, but she doesn't because when she steps toward individuality for comedy's sake, Rattle isn't there to cushion her, and she is less effective than she should be.

Overall take on Wonderful Town Recordings: No one should be without one of the Rosalind Russell recordings, I prefer the OBC because I like Edie Adams much more than Jacqueline McKeever as Eileen, but thats a choice. Jay Records version with Karen Mason and Rebecca Luker brilliantly conducted by Johnathan Owens Edwards and note complete is my first choice for a second version, but others might opt for the Cast from the last Broadway Revival with Donna Murphy which is a solid choice. I love the cast on Rattle's EMI version but again his conducting is not to the manner born.
Read more
2 people found this helpful
Helpful
Report abuse

Laszlo
5.0 out of 5 stars Outstanding
Reviewed in the United States on December 16, 2018
I have EVERY recorded version of 'Wonderful Town' in my collection. The only question I had (and still do) is why Rattle has to do this again, especially when his EMI recording is so good to begin with. So? I don't know. But who cares! This one is inexpensive, and excellent. Surely a bit different but in general terms outstanding as well. A delightful performance, with outstanding sound, where you can savor the still fresh lyrics delivered by Comden & Green (most still applicable after 65 years!) Bernstein's music is smart, poli-rythmic and delightful. And the conducting is just about perfect (I don't particularly like Rattle as a classical conductor, but when he crosses over he usually succeeds!)
And I cannot understand why pan this one, but I will not ask that either.
Read more
Helpful
Report abuse
See all reviews

NickG
5.0 out of 5 stars 'Wonderful Town' 'Rattled' again!
Reviewed in the United Kingdom on October 23, 2018
Verified Purchase
This is one of those 'live' recordings that contains no audience laughs or applause. What's the point of doing it 'live' then?
Simon Rattle has recorded and performed this concert version before so has the measure of Bernstein's rhythms off pat.
His Ruth on this occasion is Broadway's Alysha Umphress fresh from her triumph in the 2014 revival of 'On The Town ', another Bernstein show.
Excellent sound.
Read more
2 people found this helpful
Report abuse

Linda Evans
4.0 out of 5 stars Consistantly fine performers
Reviewed in the United Kingdom on January 2, 2019
Verified Purchase
Another great recording from LSO. Great soloists and choir. Only criticism is how 'live' doesn't sound like it...too tidy.
Read more
One person found this helpful
Report abuse