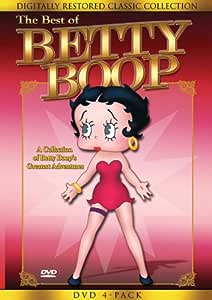 The Best of Betty Boop

Damien D. Mecoles
3.0 out of 5 stars More Pudgy than early Boop.
Reviewed in the United States on October 20, 2006
Verified Purchase
This four disc collection of Betty Boop cartoons is a compilition of Betty Boop discs available separately. Each dvd has between 8 and 10 cartoons in a random order. There are no dates or extras on them. I found the picture and sound quality to be excellent considering the age of these cartoons. I have seen some far worse prints. This box set is very cheap so you don't expect the quality of clean up of a Walt Disney Treasure. The problem I had is that these cartoons are supposedly the best of Betty Boop, that 1930's Fleischer star who sang and danced her way through scores of crazy adventures, and yet we mainly get Betty Boop housebound with her little pup Pudgy. Only a handful of Betty Boop cartoons from her early years are found here, and that's frustrating because they just make you sad when you get mainly the later staight laced Betty's that aren't nearly as funny.

Now the reason Betty Boop changed from a cabaret singer to a house wife is because US censors transformed the film industry. Betty Boop with her garter singing "You'd be surprised" was no longer acceptable. So Betty began to wear conservative clothes and sing songs like "Housekeeping Blues" instead. I have no problem with these later Betty Boops being released. Some of them are still very good, but why such an inbalance? There is no Snow White to be found here, Bimbo's Initiation, or Minnie the Moocher. If they were included then this collection would indeed be the Best of Betty Boop.

Although mostly late Betty Boop, there are a few early ones. Watch for Betty Boop as a racing driver and Betty Boop performing in Japan.

Disc 2 - The World's First Female Superhero
Judge for a Day
Betty Boop and Little Jimmy
No! No! A Thousand Times No!
Betty Boop and the Little King
The Hot Air Salesman
Stop That Noise
Musical Mountaineers
Rhythm on the Reservation
A Song a Day
The Candid Candidate

John D. Page
1.0 out of 5 stars the toons are good,the transfers are the worst
Reviewed in the United States on June 26, 2006
this is a very poor collection and between the sound drops,picture skips and freeses this is one to avoid!!!! skip it!
Read more
2 people found this helpful
Helpful
Comment Report abuse
See all reviews