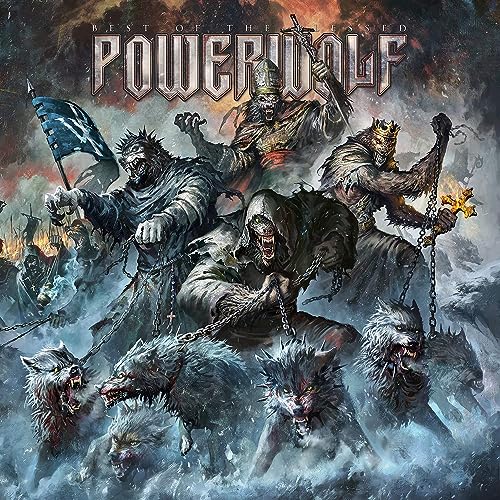 Best of the Blessed

4.8 out of 5 stars
4.8 out of 5
387 global ratings
How are ratings calculated?
To calculate the overall star rating and percentage breakdown by star, we don’t use a simple average. Instead, our system considers things like how recent a review is and if the reviewer bought the item on Amazon. It also analyzes reviews to verify trustworthiness.
Top reviews

Jacob Gomes
5.0 out of 5 stars Over 2 hrs of awesome!
Reviewed in the United States on April 18, 2021
Verified Purchase
So freaking epic! I don't have cell reception on my way to work, so now I can blast? Powerwolf on my way there with signal or no! Sometimes it just needs to be analog ya know!
Read more
One person found this helpful
Helpful
Report abuse

Kindle Customer
5.0 out of 5 stars Amazing album! Would definitely recommend.
Reviewed in the United States on September 10, 2020
Verified Purchase
Bought this as a birthday gift to myself. Did not regret it at all. Definitely my new favorite CD.
Read more
2 people found this helpful
Helpful
Report abuse

mark lauersen
5.0 out of 5 stars Great band
Reviewed in the United States on October 26, 2020
Verified Purchase
Great german band. You have to hear them. Check them out on YouTube
Read more
One person found this helpful
Helpful
Report abuse

Joel Barrios
5.0 out of 5 stars The heavy metal mass has never sounded better, so be ready to confess your sins
Reviewed in the United States on July 4, 2020
Does “Best of the Blessed”, the first greatest hits album by Powerwolf, is worthy of our time and money? Short answer: Absolutely. The High Priests of Heavy Metal gathered and established an ecumenical council, in which they determined to reunite sixteen of their most potent and sacrilegious metal psalms to deliver them refreshed, through body and blood for their hordes to rejoice.

The Wolves even decided to transfigure seven of them, so now, we are blessed with new versions of their early anthems, such as devotees’ favorites like “We Drink Your Blood”, “Sanctified with Dynamite” and “Resurrection by Erection.” It also includes fourteen live songs taken from the impartation of the sacrament on their Wolfsnächte Tour during 2018. The powerful atmosphere can be appreciated; the ecstasy of the minions is palpable. Listening to such live tracks is pure joy. One can only imagine how invigorating must feel to be out there with the wolf-pack, singing along to the ceremonial songs, immersed in pure heavy metal elation.

This album should get your predatory needs covered until Powerwolf can tour again, hopefully with a new album under their jaws, which they are currently working on. The Heavy Metal Mass has never sounded better, so be ready to enter a musical coven with no equal that would get the listener howling through the night.
Read more
10 people found this helpful
Helpful
Report abuse
See all reviews