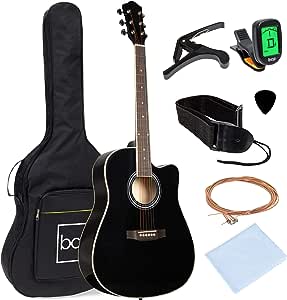 4.5 out of 5 stars
4.5 out of 5
3,804 global ratings
How are ratings calculated?
To calculate the overall star rating and percentage breakdown by star, we don’t use a simple average. Instead, our system considers things like how recent a review is and if the reviewer bought the item on Amazon. It also analyzes reviews to verify trustworthiness.

Anna Yushkova
5.0 out of 5 stars Great entry level guitar at an amazing price
Reviewed in the United States on February 28, 2019
Color: BlackVerified Purchase
Are you looking for an entry level guitar at an amazing price? Well, then this is the guitar for you. I have been playing guitar for 15 years and have had many guitars from really cheap to really expensive. I think that they have really stepped up their game in making these entry level guitars sound so rich. I bought this guitar for my son and was tempted to keep it for myself because it has a great full body sound. If your'e looking for a Gibson, you are going to pay a Gibson price but if you are thinking about learning the guitar and are not ready to take the plunge into such an investment then I recommend this guitar.
Read more

Casey H.
5.0 out of 5 stars Great bang for the buck!
Reviewed in the United States on August 31, 2019
Color: BlueVerified Purchase
Honest review:
If you’re an absolute beginner, this is the guitar for you!
There’s absolutely nothing fancy about it. There are swirls on the blue body from the buffing/finishing process, some sloppy glue around the neck, and the littlest string (little or Hi- E, just learned that) was broken when it arrived. The guitar kit came with extra strings, so I replaced the string and it was good to go!
The digital tuner that comes with it wouldn’t function properly, so I purchased a $15 one with great reviews.
It does need fine tuning prior to use and after playing for a while. I played 50 min the other day and it BARELY came out of tune, couple of tweaks to the keys and it was right as rain.

That all being said, I fully endorse this guitar!! I paid $75 for this guitar and $15 for a different digital tuner, and it’s worth every penny!
If you buy a guitar (any instrument really) for under $100 and expect the same craftsmanship as a $400-700 guitar, then YOU are the problem NOT the guitar.
Don’t listen to the haters.

Whether you don’t want spend a fortune on an instrument your kids or grandkids may not stick with, or you’re a 35 yr old learning to play in your spare time like me.. I fully endorse this beginner guitar!!!! Assuming I continue to get better, I will be upgrading to a better guitar eventually. This one will do well for the foreseeable future.

Lawrence W. Marcus
3.0 out of 5 stars On time and everything there. Broke while tuning.
Reviewed in the United States on March 20, 2019
Color: NaturalVerified Purchase
Got everything and was really happy with it all! While tuning it one of the turn knobs for the string broke off now can’t tune it, kind of disappointed about this. Sent them an email so we will see what happens.
Read more
78 people found this helpful
Helpful
Report abuse

anon
5.0 out of 5 stars tuner doesnt really work.
Reviewed in the United States on April 20, 2019
Color: NaturalVerified Purchase
download the fender tuning app for accurate tuning. I have been learning on this beauty since march and im lovin it. Its a solid product.
Read more
56 people found this helpful
Helpful
Report abuse

zzzrain
3.0 out of 5 stars Its a great starting point! And comes with everything you need to get started
Reviewed in the United States on June 18, 2020
Color: BlackVerified Purchase
Long story short, a homeless guy on a bike got hit by a car. His guitar was smashed and as the EMTs and police were helping him all he was concerned about was his guitar. So some of the people that witnessed it put out a post to see if someone would get him a guitar. I looked everywhere locally but couldn't find a decent guitar one marketplace or craigslist so I ordered this one.

Pros
1) it actually is a pretty guitar, pleasing to the eye
2) Fret edges are pretty smooth and not just for this price range
3) Neck is straight as an arrow
4) Frets are smooth, I wouldn't say polished but not gritty
5) As the description shows, it comes with everything to get started
5) Sound wise, I have heard worse. I play mostly solid wood name brand acoustics so to my ear it does sound bad but I know as a kid I would have been happy to have this guitar

CONS
1) The action was the worse thing, it is very high so for a beginner it could turn them off. Now with the neck angle looking fine and the neck being straight it looks like the nut was cut too high and/or where the strings go through it needs to be filed down just a bit. The other thing to do would have been just to sand down the bridge saddle on the base/bottom since it was a bit high as well. you have to be a little careful when doing that though and just make sure that you sand it straight. I hold it in my hand then run it in one stroke back and forth the long way on a full size sandpaper sheet. Unfortunately I was so busy this week I didn't have time to do that for him
2) The tuners are not the greatest but it does the job
3) Not sure if its the tuners or the bad strings, but the strings kept stretching even after I stretched it so there "could" be a problem there. But it would help a beginner know how to start keeping their guitar in tune
4) Since the strings are kind of high, it's ok for playing open chords but bar chords and lead/single notes the intonation is off because you have to push so far for the strings to reach the fret so the distance plus the extra tension makes the notes sharp. Again, if you file down the nut and the bridge that would probably help. And yours might be fine, I'm only referring to mine specifically.
5) The bridge was lifting slightly at the back, but just barely. Over time it might lift off but I've seen worse and blue holds pretty good even if the bridges start to lift like that. I also bet the bridge is screwed in though, since there looks to be 2 little circles on each side of the bridge. They use to do that to cheaper guitars to help keep the bridge down.

My overall impression is that this is a great value but is not for everyone. If you know someone who has played and can set up a guitar for you, then get it. If I had the time, I could get this playing and sounding like a $120 - 200 non solid top guitar. If you wanted to practice upgrading a guitar and setting it up, this would also be great for you! If you want a guitar to fumble around with and play campfire songs with open chords and not care if it gets too cold and you need to use it as campfire wood, I'd say get it. If you need all the accessories and the guitar is just a bonus, wait for a sale and get it.

I wouldn't recommend it for a true beginner who is on their own though, because the strings are hard to press down and the sound is not "great" so that together would make them think they are doing something wrong. It can be a pretty good guitar but with some work. If you can afford to pay a little more you can get one that wouldn't need as much work. But if you can only afford this one as a "base" then it's not bad. Just know that you'll have to do a little bit of work to get it playing better.
Read more
28 people found this helpful
Helpful
Report abuse

Spizzy
2.0 out of 5 stars Un-tuneable
Reviewed in the United States on April 8, 2019
Color: BlackVerified Purchase
I can not keep this guitar in tune. Minutes after I tune it, the strings all go flat. Going to buy new strings but, this is inconvenient.
Read more
42 people found this helpful
Helpful
Report abuse

MrClean402
5.0 out of 5 stars "You Tune Me On"; BEST beginners kit, PERIOD
Reviewed in the United States on July 12, 2020
Color: NaturalVerified Purchase
My brother is a professional musician, he helped me scour the internet for at least 14 seconds for the best, cheapest beginner setup for a full-size guitar and THIS IS IT. Period.

Here's what did it for me:

Each of the three guitar picks this getup comes with had - get this - handwritten freaking hilarious puns on them!!! I mean, genuinely hand written, with sharpie. My absolute favorite? "Pluck You" and on the flip, "You Tune Me On".

For real, buy this set. I bought two. By accident.
Read more