Save 10% when you receive 5 or more products in one auto-delivery to one address. Currently, you'll save 5% on your Feb 28 delivery.

Save 10% when you receive 5 or more products in one auto-delivery to one address. Currently, you'll save 5% on your Feb 28 delivery.

We'll send you a reminder before each delivery.
Learn more
Get it Thursday, Dec 8
In Stock.
Qty: 1
Deliver every:
3 months (Most common)
3 months (Most common)
[{"displayPrice":"$9.99","priceAmount":9.99,"currencySymbol":"$","integerValue":"9","decimalSeparator":".","fractionalValue":"99","symbolPosition":"left","hasSpace":false,"showFractionalPartIfEmpty":true,"offerListingId":"W1cu9WfOs44VVgfnyw4EnV%2BhgILYmeTWGe06gS3nyzKuiOnA43322nI5Dxj%2F0JwqQbrXUuK1PYflTnVxFgvbpmQ1xwkj8L6CyS6NdYNebEovKvRpCd7UlrKYUix%2FlVI8w68R1%2FMc3Yef8cPR39qAMpzBlz21WJ%2Bbfv0nHmA5UwluW%2FyK%2BUihvG3llrosjiR8","locale":"en-US","buyingOptionType":"NEW"},{"displayPrice":"$9.49","priceAmount":9.49,"currencySymbol":"$","integerValue":"9","decimalSeparator":".","fractionalValue":"49","symbolPosition":"left","hasSpace":false,"showFractionalPartIfEmpty":true,"offerListingId":null,"locale":"en-US","buyingOptionType":"SNS"}]
Price ($9.99x)
$9.99
Subtotal
$$9.999.99
Subtotal
Initial payment breakdown
Shipping cost, delivery date, and order total (including tax) shown at checkout.
Enhancements you chose aren't available for this seller. Details
To add the following enhancements to your purchase, choose a different seller.
%cardName%
${cardName} not available for the seller you chose
${cardName} unavailable for quantities greater than ${maxQuantity}.
Auto-deliveries sold by Prime Time Commerce and Fulfilled by Amazon
Share
Have one to sell?
Sell on Amazon 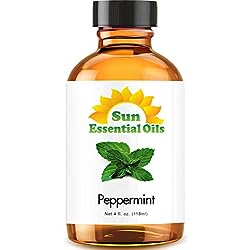 Amazon Customer
1.0 out of 5 stars I WANT MY MONEY BACK!
Reviewed in the United States on February 23, 2016
I'm so upset! THIS IS NOT 100% peppermint oil! Smells more like olive oil. I want my money back! Thats false advertisement.Anyone who uses peppermint oil knows that it does not leave your skin oily like you see in my picture.I Don't understand how they have a 4 star rating when this isn't the REAL THING?!Not 100 % pure peppermint oil.You can test to see if your peppermint oil is 100% pure by putting a tiny drop on a plain white piece of paper(draw a line aroun the oil spot) and within 24 to 48 hours that spot will be COMPLETELY gone no signs that it was ever there! HOWEVER if it is NOT 100% pure peppermint oil there will still be an oil stain there.
Images in this review

Renata “Vita” Rhodes
4.0 out of 5 stars Smells great
Reviewed in the United States 🇺🇸 on November 25, 2022
Scent: PeppermintVerified Purchase
Works great for joint pain. I also use this to add in my body butters.
Read more
Helpful
Report abuse

Hollywog
5.0 out of 5 stars Good for sinus congestion/coughing
Reviewed in the United States 🇺🇸 on November 17, 2022
Scent: PeppermintVerified Purchase
I put a few drops in boiling water and breathed in the vapors. It helped a lot with sinus congestion. Just remember, a little goes a long way.
Read more
One person found this helpful
Helpful
Report abuse

Mary E. Sharif
5.0 out of 5 stars Bought to deter mice
Reviewed in the United States 🇺🇸 on November 4, 2022
Scent: PeppermintVerified Purchase
I really liked the fact that a dropper was included with purchase. I bought to try to deter mice in pantry, after cleaning pantry and storing foodstuffs in containers, used cotton balls added peppermint balls. So far so good and pantry smells great.
Read more
2 people found this helpful
Helpful
Report abuse

Jan
4.0 out of 5 stars Smell fades quickly
Reviewed in the United States 🇺🇸 on October 24, 2022
Scent: PeppermintVerified Purchase
This product is very easy to dispense, arrived quickly and well packaged. I bought it to keep spiders/mice out of our RV and the smell fades quickly. Time will tell if this works or not. I do not believe this is pure peppermint oil.
Read more
2 people found this helpful
Helpful
Report abuse

Sheila G Walter
5.0 out of 5 stars It works
Reviewed in the United States 🇺🇸 on November 4, 2022
Scent: PeppermintVerified Purchase
I bought this I put cotton balls soaked with peppermint oil around the house. It chases away Spiders. We used to have giant wolf spiders and we get a mouse about every 2 months . I haven’t see a mouse or a spider in months
Read more
4 people found this helpful
Helpful
Report abuse

RK
5.0 out of 5 stars I didn’t know peppermint oil could be so useful!
Reviewed in the United States 🇺🇸 on July 6, 2020
Scent: PeppermintVerified Purchase
I marked the scent as a 5. I don’t particularly like mint except in ice cream and Christmas cookies. Those are both fake mint. The peppermint oil works wonders for me in two situations, keeping paper wasps from making nests near my hummingbird feeders and keeping spider mites away from my tomato and cucumber plants. I actually like having paper wasps around. They are not aggressive, they pollinate plants, they eat caterpillars like leaf miners and tomato worms (the fat green creatures with what look like sharp horns on their heads and butts) Spider mites ( NOT a spider! Spiders are wonderful helpers in the garden. They eat many of the pests that can damage plants, they are shy and want to avoid us! I know there are some very dangerous spiders out there but not in places most of us live.{Australia, I don’t remember if you all have deadly spiders or very dangerous snakes. Three AFS siblings from that wonderful country and I’m drawing a blank. If I’ve left anyone else out, please comment on this review and educate me. Trying to avoid being any more of an insulated, ignorant, ugly American than I have to be. }A Brown Recluse packs a wallop. Black Widows are actually shy and just want to hangout somewhere cool, dark and not crawling with scary things like humans. The Brown Widow is said to be more aggressive than the Black Widow but the brown is aggressive to the black, attacking egg sacks to kill the Black Widow’s offspring as well as the adult female. I have been bitten by spiders and it is pretty much like a mosquito bite. I have never been chased down and bitten by a spider. But I don’t go walking through spirit plagued bogs, hang out with lots of other hobbits, wear rings that make me feel distrustful of my friends or try to sneak into lands watched over by huge eyeballs and an army of creatures that drool more than a pack of Saint Bernards taking their favorite tennis balls on a hike past a pork products cooking contest.)
Anyway, the paper wasps were intent on making a nest less than 18 inches from a well used hummingbird feeder. I moved their nest to the opposite side of the house. I used a soft duster to remove all the stragglers who were trying to build a new nest. I captured the queen and moved her as far away from hungry hummers. Finally I googled things paper wasps will avoid. I put about an oz of peppermint oil, a cup of warm water and a drizzle of olive oil in a spray bottle, moved the wasps so I could spray the areas of my wooden porch with the oil mixture without spraying the wasps. They flew around for a while, looking, I guess, for a spot without peppermint oil. By dusk they had all disappeared. There were a number of them checking the area this morning but by noon they were in the wet coco coir plant saucer. Hunting for the perfect nest site is thirsty business.
Oh, forgot to add, I put a dab of the peppermint oil mix on the underside of two or three leaves of any plant spider mites may want to suck the life from. I also sprayed a bit on the soil around the plants. Fingers crossed!

CC Edds
5.0 out of 5 stars Very pleased.
Reviewed in Australia 🇦🇺 on January 21, 2021
Scent: PeppermintVerified Purchase
So far I haven't done much more than inhale this wonderful scent. It is clean, no 'off' chemical smells, fresh and exactly what I wanted.
Read more
Report abuse
See all reviews
<div id="dp-ads-middle_feature_div" class="celwidget" data-fea