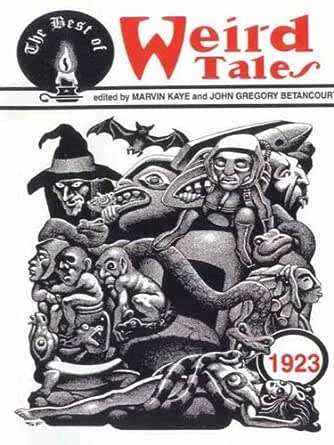 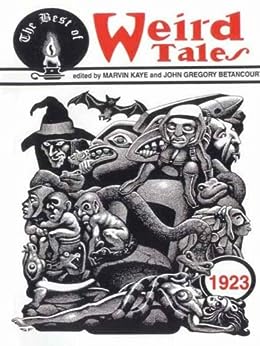 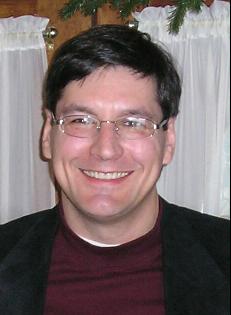 L. D. Jentzer
3.0 out of 5 stars The Best of Weird Tales: 1923: Incredibly Lame, but Lots of Fun!
Reviewed in the United States on July 18, 2016
Verified Purchase
If you are looking for great writing and great horror stories, you ain't gonna find them here. But, if you are a Weird Tales aficionado, as I am, this book provides a fascinating glimpse into the first year of Weird Tales long run, and presents authors and stories that I have, for the most part, never read or even heard about before. Most of us know Weird Tales from such well-known authors as Lovecraft, Smith, Howard, Quinn, Bloch & Dereleth, who hit their stride from the late twenties into the late thirties. Some of these guys might be considered hacks, and certainly all wrote some hack work, but compared to the stories in this collection, they were literary gods. And that's what makes this collection so much fun. It's akin to the pleasure you get from Mystery Science Theatre. If these were the best of 1923, I can't imagine what the worst were like. But, I'd love to read them! I'm not certain if they exist, but if they do, I intend to also purchase and read "The Best of Weird Tales" for 1924, et seq., and go for more wonderful excursions into nostalgia.
Read more
2 people found this helpful
Helpful
Comment Report abuse

s.ferber
4.0 out of 5 stars A Valuable Peek Into A Nascent Classic
Reviewed in the United States on January 3, 2011
Verified Purchase
Marvin Kaye and John Gregory Betancourt's "The Best of Weird Tales: 1923" has a wholly different thrust as compared to previous anthologies that collected stories from "The Unique Magazine." Whereas "Weird Tales: 32 Unearthed Terrors" had cherry-picked one story from each year of the celebrated magazine's 32-year run (1923-1954); Kaye's previous "Weird Tales" collection of 1988 had included not just stories from the publication's classic years, but from the five reincarnations dating from 1973-1987; and Peter Haining's "Weird Tales" collection had presented facsimile reproductions of the actual magazine pages, the book in question here simply dishes out a baker's dozen stories that initially appeared in the eight issues of "Weird Tales"'s inaugural year. Most of these stories are true rarities, written by authors who are hardly household names today, even to fans of horror, fantasy, sci-fi and macabre literature.

The collection kicks off with Orville R. Emerson's "The Grave," a ghastly little tale from the trenches of WW1 that culminates quite ironically. "The Basket," by Herbert J. Mangham, is an odd little slice of life, depicting the quiet existence and passing of a man who scarcely causes a ripple on the world's consciousness. "Beyond the Door," by J. Paul Suter, tells of an emotionally stunted scientist who is haunted by visions of a strange well in his basement, leading to a conclusion that is at once both surprising and apropos. One of many (what Kaye refers to as) "malevolent vegetable stories" to appear in "Weird Tales" over the decades, "The Devil Plant," written by Lyle Wilson Holden, is a purple-prose tale of vengeance that takes place in the Australian outback, marred only by a weak description of that "devil tree." In Julian Kilman's "The Well," we are given still another man who is haunted by visions of a sinister cistern. This outdoor slice of rural nastiness culminates with a satisfyingly horrific denouement. One of the best (and longest) tales in the collection, "The Two Men Who Murdered Each Other," by Valma Clark, tells of the rivalry between two archaeologists, incorporating shipwreck, murder, hallucination and decades-long guilt into a most impressive piece of storytelling. P.D. Gog's "The Dead-Naming of Lukapehu" is a short-short; a tale of a Hawaiian witch doctor that has no real impact, perhaps due to its brevity, but, as Kaye tells us in his introduction, "might well be a true story." "The Bloodstained Parasol," by James L. Ravenscroft, is a tale concerning madness, romance and vivisection (!), concluding with a fittingly macabre moral. In "The Man Who Owned the World," Frank Owen presents us with another case of madness: a homeless person in Greenwich Village who believes he is the master and owner of everything he surveys, leading to another ironic and memorable conclusion. Farnsworth Wright, who would go on to edit 177 issues of "Weird Tales" from 1924-1939, is represented in this volume with the humorous story "An Adventure in the Fourth Dimension," a tale whose silliness is mitigated by it final two paragraphs. H.P. Lovecraft, one of "Weird Tales"'s more renowned alumni, is shown to good effect by his first story in the magazine (found in the October issue), "Dagon." This early tale from the man who would go on to become one of the most important horror writers of the 20th century depicts a subterranean land that is volanoed up to the surface of the sea, and the terrifying experiences that a lost sailor has while exploring it. "Dagon" is easily the best-written of all the 13 tales in this volume. Finally, we have John D. Swain's "Lucifer," the story of a Satanic miracle cure in a 19th century London hospital that ends on a deliciously morbid note.

As you can see, a highly eclectic collection, and if most of the authors here are comparative "nobodies," well, I suppose that is part of the volume's charm: It introduces us to a large assortment of talented writers who have long been ignored. This volume, on the down side, can hardly be called a generous collection, at a mere 129 pages, and contains an inordinate number of typographical errors. (Was this book even proofread before publication?!?!) Still, it affords us the wonderful opportunity to peek into "The Unique Magazine" in its earliest, nascent months, as as such must be deemed essential reading for all fans of pulp literature. I do recommend it.

S. Craig Zahler (Crime, Western, Sci-Fi Author)Top Contributor: Board Games
3.0 out of 5 stars A better idea than assortment tales is presented in this volume of Weird Tales stories from 1923.
Reviewed in the United States on November 23, 2013
Verified Purchase
Included in this anthology are several terrible selections--such as the forced, silly and badly-written The Devil Plant and the nonsensical offering, The Purple Heart, and the "comedic" story An Adventure in the Fourth Dimension.
There are some tales that start out well and end abruptly/too hastily (The Bloodstained Parasol by James L. Ravencroft & The Well by Julian Kilman & The Grave by Orville Emerson). Stories that are good include Dagon by Lovecraft, which is readily found a hundred other places, and the Poe-influenced Beyond the Door by J. Paul Sutter, and to a lesser degree, Lucifer by John D. Swain works. The remainder are decent, but forgettable, including the longest tale in the book, The Men Who Murdered Each Other. Certainly I doubt that these were truly the best of these magazines--- it's hard to imagine that an issue of stories inferior to The Devil Plant or The Purple Heart could ever exist.
Overall, a mostly acceptable assortment of tales that did not inspire me to further investigate the work of most of its authors, which was my hope.

For those who want to adventure past the the Eldritch Trinity (RE Howard, HP Lovecraft, and my favorite, Clark Ashton Smith) and look at others weird fiction writers, first go back in time to Arthur Machen (The Three Imposters is a masterpiece) & Algernon Blackwood (The Wendigo is incredible), and then dig into hearty collections by Weird Tales peers, Carl Jacobi (Revelations in Black) and Donald Wandrei (The Eye and the Finger).
Read more
7 people found this helpful
Helpful
Comment Report abuse

Andrew Buckle
4.0 out of 5 stars Fine snapshot of Weird Tales circa 1923
Reviewed in the United Kingdom on October 15, 2009
Verified Purchase
Some interesting horror (though some are barely that) tales from 1923 Weird Tales. Also has many informative (though albeit too short) articles per month mentioning the stories that might have made the cut as well as items for possible future anthologies. Hard to judge if these are the best or not of the period as the books are impossible to find (and expensive if you do).

Sadly a 1924 book was announced as forthcoming, .. it would have made for an interesting series of books.
Read more
2 people found this helpful
Report abuse

Matteo Beltramo
4.0 out of 5 stars Unfortunately it seems that it was not the first of a series
Reviewed in the United Kingdom on January 12, 2012
Verified Purchase
Even if it is difficult to understand before buying it, this "best of" is limited to 1923, the fist year of Weird Tales magazine publication.
All in all the selection is of excellent stories. The only disappointment with the book is its cover: I'd very much preferred if one of the original Weird Tales covers of the ones published in 1923.
I'd have liked this book to be the first of a series, one per "Weird Tales Magazine" year. Infortunately it seems it remains the only one of its breed.
Read more
3 people found this helpful
Report abuse
See all reviews