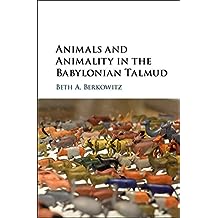 Animals and Animality in the Babylonian Talmud Apr 30, 2018
by Beth A. Berkowitz
$60.49
Animals and Animality in the Babylonian Talmud selects key themes in animal studies - animal intelligence, morality, sexuality, suffering, danger, personhood - and explores their development in the Babylonian Talmud. Beth A. Berkowitz demonstrates that distinctive features of the Talmud - the new literary genre, the convergence of Jewish, Christian, and Zoroastrian cultures, the Talmud's remove from Temple-centered biblical Israel - led to unprecedented possibilities within Jewish culture for conceptualizing animals and animality. She explores their development in the Babylonian Talmud, showing how it is ripe for reading with a critical animal studies perspective. When we do, we find waiting for us a multi-layered, surprisingly self-aware discourse about animals as well as about the anthropocentrism that infuses human relationships with them. For readers of religion, Judaism, and animal studies, her book offers new perspectives on animals from the vantage point of the ancient rabbis.
Read more
Other Formats: Hardcover 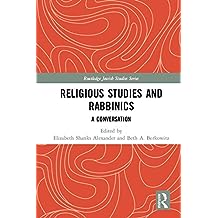 Religious Studies and Rabbinics have overlapping yet distinct interests, subject matter, and methods. Religious Studies is committed to the study of religion writ large. It develops theories and methods intended to apply across religious traditions. Rabbinics, by contrast, is dedicated to a defined set of texts produced by the rabbinic movement of late antiquity.

Religious Studies and Rabbinics represents the first sustained effort to create a conversation between these two academic fields. In one trajectory of argument, the book shows what is gained when each field sees how the other engages the same questions: When did the concept of "religion" arise? How should a scholar’s normative commitments interact with their scholarship? The book argues that if scholars from Religious Studies and Rabbinics do not realize they are addressing the same problems, they will not benefit from each other’s solutions. A second line of argument brings research methods, theoretical claims, and data associated with one field into contact with those of the other. When Religious Studies categories such as "ritual" or "the sacred" are applied to data from Rabbinics and, conversely, when text-reading strategies distinctive to Rabbinics are employed for texts from other traditions, both Religious Studies and Rabbinics enlarge their scope. The chapters range across such themes as ritual failure; rabbinic conceptions of scripture, ethics, food, time, and everyday life; problems of definition and normativity in the study of religion; J.Z. Smith’s writings; and the preaching of the African-American Christian evangelical social justice activist John Perkins. 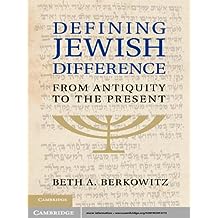 Defining Jewish Difference: From Antiquity to the Present Mar 19, 2012
by Beth A. Berkowitz
$38.00
This book traces the interpretive career of Leviticus 18:3, a verse that forbids Israel from imitating its neighbors. Beth A. Berkowitz shows that ancient, medieval and modern exegesis of this verse provides an essential backdrop for today's conversations about Jewish assimilation and minority identity more generally. The story of Jewishness that this book tells may surprise many modern readers for whom religious identity revolves around ritual and worship. In Leviticus 18:3's story of Jewishness, sexual practice and cultural habits instead loom large. The readings in this book are on a micro-level, but their implications are far-ranging: Berkowitz transforms both our notion of Bible-reading and our sense of how Jews have defined Jewishness.
Read more
Other Formats: Hardcover , Paperback 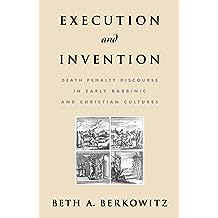 Execution and Invention: Death Penalty Discourse in Early Rabbinic and Christian Cultures Mar 23, 2006
by Beth A. Berkowitz
$67.36
The death penalty in classical Judaism has been a highly politicized subject in modern scholarship. Enlightenment attacks on the Talmud's legitimacy led scholars to use the Talmud's criminal law as evidence for its elevated morals. But even more pressing was the need to prove Jews' innocence of the charge of killing Christ. The reconstruction of a just Jewish death penalty was a defense against the accusation that a corrupt Jewish court was responsible for the death of Christ.

In Execution and Invention, Beth A. Berkowitz tells the story of modern scholarship on the ancient rabbinic death penalty and offers a fresh perspective using the approaches of ritual studies, cultural criticism, and talmudic source criticism. Against the scholarly consensus, Berkowitz argues that the early Rabbis used the rabbinic laws of the death penalty to establish their power in the wake of the destruction of the Temple. Following recent currents in historiography, Berkowitz sees the Rabbis as an embattled, almost invisible sect within second-century Judaism. The function of their death penalty laws, Berkowitz contends, was to create a complex ritual of execution under rabbinic control, thus bolstering rabbinic claims to authority in the context of Roman political and cultural domination.

Understanding rabbinic literature to be in dialogue with the Bible, with the variety of ancient Jews, and with Roman imperialism, Berkowitz shows how the Rabbis tried to create an appealing alternative to the Roman, paganized culture of Palestine's Jews. In their death penalty, the Rabbis substituted Rome's power with their own. Early Christians, on the other hand, used death penalty discourse to critique judicial power. But Berkowitz argues that the Christian critique of execution produced new claims to authority as much as the rabbinic embrace. By comparing rabbinic conversations about the death penalty with Christian ones, Berkowitz reveals death penalty discourse as a significant means of creating authority in second-century western religious cultures. Advancing the death penalty discourse as a discourse of power, Berkowitz sheds light on the central relationship between religious and political authority and the severest form of punishment.
Read more
Other Formats: Hardcover