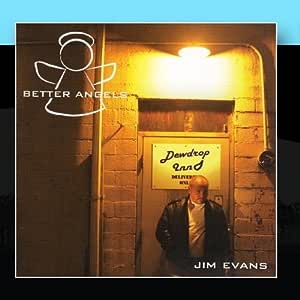 Add to Cart
$15.99
& FREE Shipping on eligible orders. Details
Sold by: Amazon.com
Have one to sell?
Sell on Amazon

Imagine if Bryan Adams' airplane crashed into the Goo Goo Dolls tour bus, and a mad scientist grew a musical clone from the wreckage. The result would sound a lot like the music of Jim Evans.

Jim has been performing publicly since the age of 10 with choral groups and as a solo performer. Growing up in the Atlanta, Georgia area, he was influenced by the early days of rap and hip-hop, as well as country music. He began songwriting at the age of 16, and has been refining his craft ever since. During his time as a student at Georgia Tech, he played in several cover bands, and it was here that he picked up influences from classic rock, and began to seriously follow top 40 and alternative music.

After graduating in 1991, Jim found work in the computer software industry, moving to the Seattle, Washington area in 1994. He continued to perform small shows with various groups while trying to find his own voice in the Seattle music scene. In 1997, Jim took a sabbatical from performing to concentrate on his songwriting. He began updating old material, as well as composing new songs with an eye toward entering the recording studio. He formed a record label, Argo Records, and the CD that resulted, Boundless, was released in 2001, and was well- received by critics and fans alike.

In 2002, he began work on a follow-up CD, which became Better Angels. Featuring a much more cohesive sound, and more guitar-oriented arrangements, the CD was released on Argo Records in early 2003 to critical success.

Jim continues to live and perform in the Seattle area.