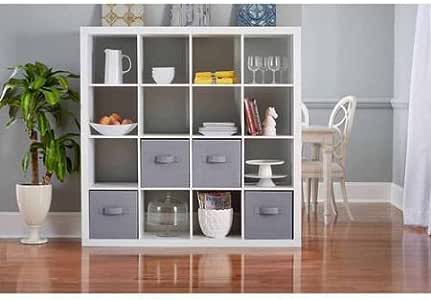 Brand: Better Homes and Gardens JEMSLY
4.2 out of 5 stars 83 ratings

Page 1 of 1 Start overPage 1 of 1
This shopping feature will continue to load items when the Enter key is pressed. In order to navigate out of this carousel please use your heading shortcut key to navigate to the next or previous heading.
Back
Next
Shop products that look good together 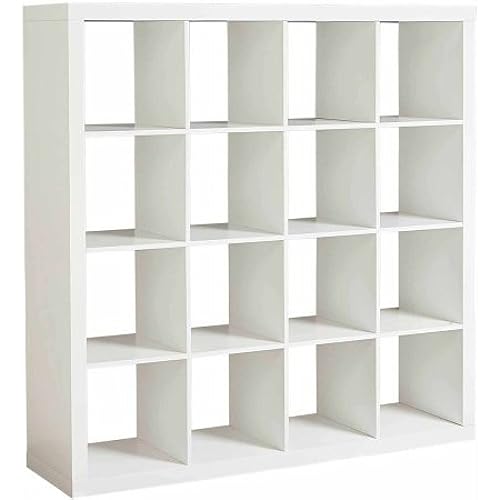 Enhance your storage space and decor style with a Better Homes & Gardens 16-Cube Storage Organizer. This stately piece makes it easy to store and display items with a breezy, open back design that lends itself easily to nearly any existing decor. It's crafted with rugged wood and wood composite materials and offers 16 open cube spaces for you to place or display small to medium-sized items. You can display books, plants, family photos and other knick-knacks both on top or in one of the cubbies or pick up a few cube organizers to store electronics, shoes, games, and throw blankets in and keep stowed away while maintaining effortless visual appeal. Available in multiple color options of your choosing, this Better Homes & Gardens 16-Cube Storage Organizer is just what you've been looking for to keep your home looking its best. From book cases to TV stands, Better Homes & Gardens furniture is designed to help you organize your home. Look for a new dresser for your clothes, display your favorite books with a bookcase or create your home office with a desk and a cube organizer. You'll also find kitchen and dining tables and chairs, living room furniture and kid s furniture.

4.2 out of 5 stars
4.2 out of 5
83 global ratings
How are ratings calculated?
To calculate the overall star rating and percentage breakdown by star, we don’t use a simple average. Instead, our system considers things like how recent a review is and if the reviewer bought the item on Amazon. It also analyzes reviews to verify trustworthiness.

Marianna
4.0 out of 5 stars Looks great, but beware!
Reviewed in the United States on September 19, 2020
Color: WhiteVerified Purchase
This unit was relatively easy to assemble, even though we built it on top of another shelf. The only issue we ran into is that it was a bit wobbly until we attached the top, so I think it's a good idea to have a second pair of hands available when working on a large piece like this. Once put together, it looks very nice and feels quite sturdy and stable, even without anchoring it to the wall, which is recommended in the instructions. Unfortunately, the 12" bins I purchased for it were way too small, leaving lots of space all around, and would've wasted much of the available space, so I had to return them and opted to just use the unit without any bins for now.

A WORD OF CAUTION: After completing the build, there was small bits of Styrofoam clinging to the shelves, so I wiped the whole unit with a well rung out damp rag. When I got near the top I was interrupted, and left the towel on the surface where I last worked. When I returned, about 20 minutes later, the moisture (just a small amount of plain tap water) had dissolved the finish under the towel. At first it looked like a stain, but the more I wiped the bigger the "stain" became, until I realized that it was actually the paint coming off, leaving the not so attractive bare pressed wood behind. Thankfully this happened at a height where no one will ever see it, but it's still very annoying to happen on a brand new item. So, DON'T GET IT WET!!! Aside from that issue, however, I'm very happy with this product.

Robyn Dunbaugh
5.0 out of 5 stars Easy for 1 person to put together.
Reviewed in the United States on November 8, 2018
Color: WhiteVerified Purchase
Easy to put together without my husbands help and is perfect for our playroom!
Read more

Amazon Customer
5.0 out of 5 stars Sturdy and easy to assemble
Reviewed in the United States on August 28, 2020
Verified Purchase
I assembled this alone on my living room floor. Directions were easy to follow. Parts were well labeled. I’m thrilled with this purchase. Sturdy and packaged well for shipping.
Read more

Thea
5.0 out of 5 stars Great quality
Reviewed in the United States on December 6, 2017
Verified Purchase
Really sturdy and holds a lot of books & art supplies. My only complaint is that any additional pieces, such as the 4-cube organizer, which would give you one more layer of shelving design, does not match up. However, I didn't knock off a star because the shelving itself is really great.
Read more
5 people found this helpful
Helpful
Comment Report abuse

Dani Marie
5.0 out of 5 stars Perfect!
Reviewed in the United States on March 6, 2017
Color: WhiteVerified Purchase
Easy to put together and very sturdy. Too many shelving units are top heavy and I'm afraid that my cats will tip it if they hop into one of the cubbies. No such worries now. Great for board games and much cheaper than Ikea furniture.
Read more
8 people found this helpful
Helpful
Comment Report abuse

Emily Colan
4.0 out of 5 stars A good storage solution for the value.
Reviewed in the United States on October 13, 2020
Color: WhiteVerified Purchase
I've purchased several BH&G cube organizers over the last few years, but this is the largest I've gotten yet. It assembles quickly and easily, just like the smaller ones. The only time I needed help was moving it in box (it is pretty heavy) and lifting the fully assembled shelf into place. I know from experience that these shelves do not hold up over time with jostling or shifting, so best to put it where you want it to be and try not to mess with it until you're ready to redecorate. Also, I was pretty disappointed that some of the larger segments did not align properly, so I had to turn the "uglier" side towards the wall so it would be less obvious.

I've got this particular shelf set up to replace my old 30"x72" overstuffed bookshelf and it holds all my books and comics from that shelf with room to spare. Plus the white finish is very nice!

Johnny
3.0 out of 5 stars Please include instructions
Reviewed in the United States on September 1, 2020
Verified Purchase
This product came with no instructions and instead of building it I’ve been spending my time trying to find the instructions so I do I can start, thankfully IKEA had a similar one and a video on how to build it, after building it I realize there was a door missing but I actually think it looks better without it this just shows this company needs to make sure that all the pieces are going into the box.
Read more
Helpful
Comment Report abuse

GAIL
5.0 out of 5 stars Great product!
Reviewed in the United States on August 7, 2017
Color: WhiteVerified Purchase
Very pleasantly surprised for the price! Very sturdy and we'll made...no problems with damaged package or damaged pieces! Took me by myself putting it together about one hour..so you don't need actually two people to put this together if you don't have help...I found the Instructions to be spot on with absolutely no problems. Very happy with this purchase!
Read more
2 people found this helpful
Helpful
Comment Report abuse
See all reviews

Page 1 of 1 Start overPage 1 of 1
This shopping feature will continue to load items when the Enter key is pressed. In order to navigate out of this carousel please use your heading shortcut key to navigate to the next or previous heading.
Back
Next
Pages with related products. See and discover other items: home office wall organization, cube storage cabinet, file bin, wall basket organizer, sink base cabinet