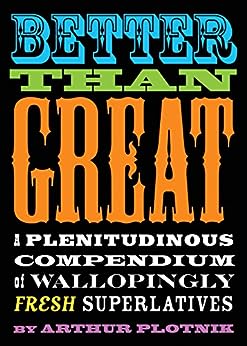 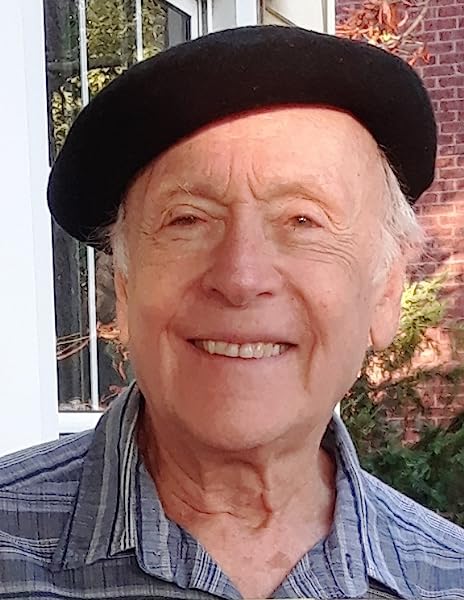 Arthur Plotnik is a versatile author with a distinguished background in editing and publishing. Among his seven previous books (not to mention 22 pseudonymous potboilers early in his career) are The Elements of Editing and The Elements of Expression, both Book-of-the-Month Club selections, and the best-selling Spunk & Bite: A Writer's Guide to Bold, Contemporary Style. His articles, op-eds, and literary pieces have been published widely, including his columns in The Writer magazine, on whose editorial board he serves.Plotnik studied under Philip Roth in the Iowa Writers Workshop, was a reporter for the Albany (N.Y.) Times-Union, and after earning a second graduate degree, worked as a Library of Congress staffer in Washington and magazine editor in New York. He received numerous honors and awards as a long-time editor and publisher with the American Library Association in Chicago. He lives in that city with his wife and an avalanche tumble of jottings for Better than Great.

An energetic escape from the literary languor that enwreathes writers and speakers addicted to stale adjectives.

Arthur Plotnik is a masterly expert on the use and the writing of the English language...a master of superlatives.

Do you feel...sometimes that you're stuck on a couple of words, unable to move beyond them? Well then, we have the book for you!

It's difficult to describe how a thesaurus is entertaining, but the author has managed it. From the sheer number of quality adjectives, I imagine I would find one in this terrific-scratch that-frabjous compendium.

Plotnik's 'acclamatory hoard' is every bit as entertaining as it is useful. And (to lift one phrase) that ain't exactly chopped herring, considering it gives this critic some six thousand substitutes for feeble old amazing and its ilk.

Well-written, and engaging...All readers will...find it supremely fascinating to learn of the terms...to express greatness.

What could be as fabulous, stupendous, showstopping, socko-boffo, and epiphanic as this neatly organized, humorous yet helpful 'acclamatory hoard' of words for praising?

Whether you use this book...when stuck for a thwackingly good superlative or...to turbocharge your vocabulary, ...you'll find the...industrial-strength verbal inventiveness that you're seeking.

Zestfully written, this...reviviscent, wordy fun is to be read as well as consulted, and what gonzo joy awaits language lovers as Plotnik serves up high-fiveable hot sauce for the brain.

Say goodbye to "awesome" and "amazing" and say hello to Better Than Great, a veritable TKO of stale superlatives with almost 6,000 alternative terms. Lexophile Arthur Plotnik presents a skull-spinning assortment of words and ideas for describing extraordinary things—the exceptionally beautiful, joyful, delicious, large, forceful, intense, trendy and more—even 50 gr8t texting superlatives! Better Than Great is the must-have reference for anyone seeking to rise above tired superlatives when the quality matters, as in love, commerce, and the arts. Critics, journalists, poets, speakers, sales reps, bloggers, Twitterers—word slingers from the whole digital and literary spectrum—should find it to be a concussively euphoriant, supernal, larky, epiphanic, über-cool, soul-juddering experience, an upful and endorphining jubilee to make the heart warble. Take your vocabulary of acclaim from woeful to whoa-ful, and don't praise anything without Better Than Great!
--This text refers to an alternate kindle_edition edition.
Read more

4.5 out of 5 stars
4.5 out of 5
75 global ratings
How are ratings calculated?
To calculate the overall star rating and percentage breakdown by star, we don’t use a simple average. Instead, our system considers things like how recent a review is and if the reviewer bought the item on Amazon. It also analyzes reviews to verify trustworthiness.
Top reviews

Deb Gallardo
5.0 out of 5 stars High-fiveably Superb!
Reviewed in the United States on September 6, 2012
Verified Purchase
You may want to permanently shelve your traditional thesaurus. If you're a writer in search of substitutes for over-used words and phrases, then Arthur Plotnik's "Better Than Great: A Plenitudinous Compendium of Wallopingly Fresh Superlatives" is the Swiss-Army-knife for your Macgyver-esque writer's bag of tricks.

When the only word that comes immediately to mind is "GREAT," "HUGE," or "AWESOME," imagine having at your fingertips such alternatives as: monsta!; a leg up on perfect; Mozartian; smack-in-the-glove perfect; tweetworthy; and more.

Regardless of your personal writing style, there are turns of phrase here for everyone, from the street-smart coarse to the ten-Ph.D. erudite. What's more, his lists will inspire you to come up with your own brains-into-putty expressions and insights that will send frissons of delight coursing down your word-loving spine.

Even these don't begin to tell the whole story. The author provides commentary at the start of each section, as well as synonyms or in-context examples for less-than-familiar expressions.

The only down-side is that I wish I'd purchased the paperback version, too. It would be dog-eared, highlighted, underlined and otherwise accoutered with sticky note tabs. On the other hand, there's a lot to be said for being able to search for something without flipping pages. I absolutely must learn how to use the highlight and bookmark functions on my Kindle!

If you love words, then this gem of a book is a no-brain inevitability for your shopping cart. Better turn on 1-click. Quick!

A reader
5.0 out of 5 stars Industrial-strength Exceptional
Reviewed in the United States on December 8, 2011
Verified Purchase
Arthur Plotnik's latest book for words people, Better Than Great, is a sizzling success. Short, punchy and unparalleled, this slender volume is good company for two of his previous writers' necessities, The Elements of Expression and Spunk and Bite. BTG is meant to be a handy reference to grab when a writer needs an expressive adjective, something other than the used-to-death "great." I wished the announcer on a recently-televised NFL game had had a copy of BTG on hand as he blithely characterized the Packers as "a great team with great owners in a great city with great fans."

Although the book is meant for occasional reference, I read it from beginning to end--it's that mesmerizing. The five appendices are an especially fecund resource, notably Appendix 5, which gives us a starter set of alternatives to tired old terms. Among my favorites are: raveworthy, avalanchine, ungluing, gobsmacking and both-barrels mind-blasting. Mr. Plotnik, URTM (per Appendix 2 on texting acclaim: You are the man).
Read more
2 people found this helpful
Helpful
Report abuse

Just Sayin'
5.0 out of 5 stars All That and More
Reviewed in the United States on February 8, 2013
Verified Purchase
Roget should have started looking over his shoulder the day Arthur Plotnik was born. I first ordered this book for my Kindle because it sounded interesting and it was very cheap, but quickly realized that this is one publication that must be handled in order to be effective.

Not only is it a "compendium of wallopingly fresh superlatives," it is flat-out fun to read.

My hard copy just arrived, and I'm already putting sticky note tabs and paper clips on my favorite pages. If you write, if you blog, if you simply love to play with words, if the banalities of awesome, great, and fabulous bore you -- go ahead and spring for the hard copy. This belongs within arms length of your keyboard.
Read more
One person found this helpful
Helpful
Report abuse

L. A. Carmichael
5.0 out of 5 stars No more thesaurus dead-ends! This book helps you say what you mean.
Reviewed in the United States on August 9, 2011
Verified Purchase
This book has raised my benchmark for brilliance when it comes to writing with superlatives. What a relief, to move beyond "great" and "awesome!" I have been using this reference constantly for the past week and it has already earned a prime position on my desk. I now consider it a must-have for bloggers and critics.

In response to the negative reviews on this book... For those who thrive on precise organization, or who twitch compulsively when facing variability, this may not be the reference for you. However, for those who feel let down by their thesaurus when their brainstorming dead ends at the same old synonyms, this is the book that will get your mind moving once more.

Personally, I find that Plotnik provides just enough organization to make the book searchable, but not so much that the reader feels limited. Whenever I want to find a synonym for a word, I simply decide if my intended meaning falls into one of his fifteen categories. Did I want to convey size? I look under "Large." If I meant to convey a sensation in the body I would look under "Physically Affecting," or if it were a sensation of the spirit I would go to "Sublime" or "Challenging Belief or Expression." This may all sound vague, but I assure you it has worked well for me. A thesaurus nitpicks over semantics. Plotnick cuts to the chase and helps your say what you mean.

One more thing. For those who argued that Plotnik included too many whimsical or nonsensical words, I would respond that whimsy can come in handy when you least expect it. My blog post on cupcakes does not need the corny (and hilarious) term "Viagara on a plate" but if I ever write myself into a corner while describing a delicious barbeque sausage sandwich, I have a feeling it might prove useful. (And hilarious.) I admit, I may not be brave enough to tell my significant other that I find them coruscatingly beautiful, but what if that same person decided to, say, buy me a diamond necklace for Valentines? Do I want to find myself at a loss for words, limited to "wonderful" or "lovely"? No, thank you. I want to be able to say, "Thank you for the lovely gift, darling. It's coruscatingly beautiful."

So, if you are capable of using eighth-grade skills such as brainstorming, categorizing, and judging context-clues, then this might very well be the book for you. It will reduce brain-blocking headaches and add whimsy to your writing life, I promise.
Read more
10 people found this helpful
Helpful
Report abuse
See all reviews
Back to top
Get to Know Us
Make Money with Us
Amazon Payment Products
Let Us Help You
EnglishChoose a language for shopping. United StatesChoose a country/region for shopping.
© 1996-2021, Amazon.com, Inc. or its affiliates