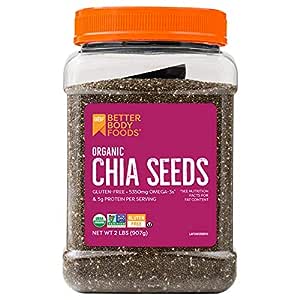 Save 15% when you receive 5 or more products in one auto-delivery to one address. Currently, you'll save 5% on your Feb 2 delivery.

Save 15% when you receive 5 or more products in one auto-delivery to one address. Currently, you'll save 5% on your Feb 2 delivery.

Finding foods with lots of nutrients can be helpful for people who are trying to change their diet and live a better life. The word “chia” comes from the ancient Mayan word for strength. Why would the Mayans use such a powerful word for such a small seed? Well, chia seeds are loaded with nutrients such as fiber and omega-3 fatty acids. Our Organic Chia Seeds are nutrient powerhouses which is why they deserve to be associated with strength. They contain 37% of the daily recommended value of fiber to help the 97% of Americans who are fiber deficient. Because our chia seeds are flavor neutral flavorless, you can add them to just about anything to get a boost without changing the taste of your food. Just mix our chia seeds with your favorite breakfast shake, smoothie, bread batter, or other food that could use a little extra crunch that your family will love! Use them as a pre- or post-workout boost with protein powders that you are already using. You can also sprinkle the seeds as a topping on yogurt, salads, or cereal for a satisfying snack! Our Organic Chia Seeds also make a great egg replacement. Just mix 1 tbs. of chia seeds with 3 tbs. of water and let it sit for 5 minutes. Then use as an egg substitute in your favorite recipes. These Organic Chia Seeds are gluten-free, vegan, nut-free, raw, low-carb, non-GMO, and paleo-friendly, making them the perfect powerhouse for your pantry. BetterBody Foods is determined to bring you quality products that are better for your body but that don’t make you sacrifice the flavors that you enjoy. Find food that you’ll love to love with our 2 lbs. bulk container of Organic Chia Seeds!

Add chia to salads, yogurt, smoothies and baked goods, or use as a thickener to give a nutrition boost to any recipe.

4.8 out of 5 stars
4.8 out of 5
34,648 global ratings
How are ratings calculated?
To calculate the overall star rating and percentage breakdown by star, we don’t use a simple average. Instead, our system considers things like how recent a review is and if the reviewer bought the item on Amazon. It also analyzes reviews to verify trustworthiness.

Tommy Liveoak
1.0 out of 5 stars Bugs in the container!
Reviewed in the United States on January 22, 2019
Verified Purchase
Just opened this container and put the scooper in to use in a drink and bugs started crawling up the measuring spoon!

How do I return this! Do not buy!

Emmaloo
1.0 out of 5 stars Bugs
Reviewed in the United States on January 31, 2019
Verified Purchase
I am so sad to write this and sorry to those of you who will be disgusted by this; this is the second container of these I've bought that have little tiny bugs in them. The first time I found bugs, it was when I'd almost finished eating the entire container and blamed my husband (oops) for leaving the container open. I assumed the bugs got in because he left it open (which he probably actually didn't) but I just opened a NEW container and there are even more bugs in that one!!!! So now I know that they just come with the chia seeds upon arrival.
SO GROSS. Yep, I'm quite a hippy but I don't really like eating bugs. Especially when they aren't supposed to be in my food.
Read more
769 people found this helpful
Helpful
Comment Report abuse

Saner K.
1.0 out of 5 stars Small moving things appeared inside
Reviewed in the United States on January 19, 2019
Verified Purchase
I bought this thing 3-4 months ago, always kept cap closed in dark place. Today i saw very small creatures moving inside. I can send the product to seller if they want to analyze.
Read more

J. Swift
1.0 out of 5 stars So much dirt
Reviewed in the United States on April 19, 2018
Verified Purchase
Has too much dirt in it. I like to put chia seeds in my drinking water but I kept getting dirt along with the seeds. I’ve never had this problem with other brands.
Read more
424 people found this helpful
Helpful
Comment Report abuse

W. D
1.0 out of 5 stars Seeds mixed with twigs:(
Reviewed in the United States on March 31, 2018
Verified Purchase
Very disappointed, maybe it’s only on the batch that I bought but it is full of little twigs that are very hard... impossible to eat without sorting my seeds first. Won’t buy again.
Read more

A. A.
1.0 out of 5 stars Wouldn’t recommend it to my enemies.
Reviewed in the United States on October 3, 2018
Verified Purchase
Beware the quality. Loads of sand rocks or dried seeds are amongst it. The overall quality is very poor. Ended up feeding the wild birds with it.
Read more
329 people found this helpful
Helpful
Comment Report abuse

Grant R
5.0 out of 5 stars A reasonable price for healthful organic chia seeds!
Reviewed in the United States on October 12, 2019
Verified Purchase
I recently made some radical dietary changes, and then after rereading a book I read several years ago (Christopher McDougall's "Born to Run"), I decided to give chia seeds a try for the first time in my life—since they're not too carb-heavy to fit in fairly well with my new keto regimen.
After some cautious experimentation, I concluded that grinding them in the coffee grinder prior to using in supplemental protein shakes works best for me, and it's easy. In each shake I use 14g ground chia seeds; 14g ground flax seeds; 20g pea protein powder; 12oz purified water; a wee bit of flavoring (cinnamon, vanilla, coconut flour, etc.), and stevia—for palatability. Placing this healthful concoction in the fridge for about 30 minutes prior to consumption allows it to thicken nicely. Adding more chia, and/or using less water yields a lovely pudding-like dessert dish.
I was emphatically dubious when reading reviews claiming there be "bugs" crawling in, on, or about the containers; hence was unwilling to give much credence to such assertions—devoid as they were of any real empirical evidence, and/or visual documentation for the sake of substantiation. Furthermore, the negative reviews with pictures included fall miserably short of even coming close to offering definitive proof of any life-forms being present. (Are they kidding, or what!)
Nevertheless, I poured about 8oz of seeds into a large plastic bowl in order to carefully scrutinize them myself—under magnification (with typically Sherlockian ebullience), and found absolutely no evidence of minuscule life-forms (or any excessive debris for that matter). It was however, somewhat amusing to observe these diminutive seeds become seemingly hyperactive due to the effects of static electricity as I was returning them to their container. (Another reviewer mentioned this cause & effect activity too.)
I think that this is a good product, and one being sold at a fair and competitive price here ($6.87 for 32oz), especially for an organically grown product. I've ordered it twice already (8 lbs so far), and will probably purchase plenty more unless the price increases to more than I would pay for similar foodstuffs at local stores, or until which point I actually do witness live critters burrowing and frolicking about, and/or get attacked by teensy-weensy, winged-monkeys flying out of the container when I remove the safety seal. (The latter would definitely do it ... oh yeah!)
Read more

Page 1 of 1 Start overPage 1 of 1
This shopping feature will continue to load items when the Enter key is pressed. In order to navigate out of this carousel please use your heading shortcut key to navigate to the next or previous heading.
Back
Next
Pages with related products. See and discover other items: dietary snacks, paleo foods and snacks, Organic Foods, Organic Yogurts, raw chia seeds, Chocolate Drinks