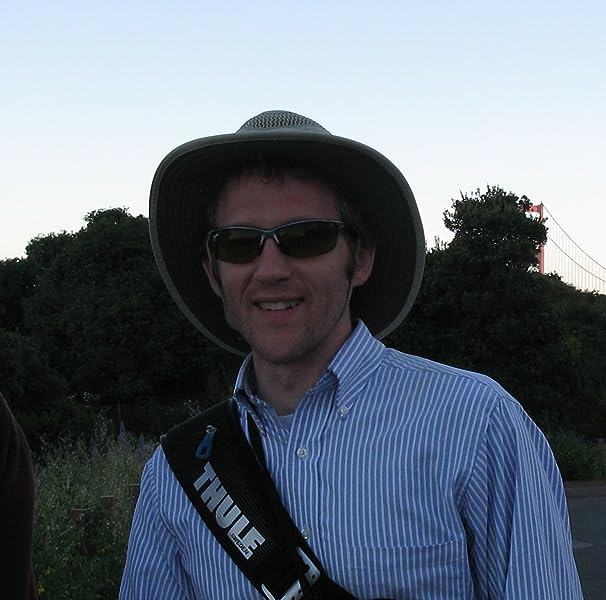 Between Heaven and Earth: An Artist's Journey Through the Stars Paperback – February 22, 2019

by Nathan Warner (Author)
4.5 out of 5 stars 5 ratings
See all formats and editions
Sorry, there was a problem loading this page. Try again.

Join a Star Trek artist’s journey to the stars. Embark with me across space and time to far flung vistas of the universe. Prepare to be transported beyond your imagination through these artistic “windows” into the future. This book is the first in a series and includes 25 original Star Trek art pieces with excerpts from the short stories that accompanied them, taking you on endless adventure as you jump from place to place, observing the spacefaring drama of starships and their daring crews on the edge of the final frontier. Are you brave enough to follow?
Read more
Previous page
Next page

Nathan Warner was educated in the Planetary sciences with degrees in Geology and Geophysics. Since then, he's worked in engineering support and church ministry. He's a 3d-animator, graphic artist and designer, and an amateur artist with a love of God's amazing creation. In 2016, he sought a creative outlet to get "off-world", and his childhood love of Star Trek, with its optimism, sense of duty and responsibility, exploration, and discovery, which was a natural allure. He began by composing audio tracks to compete with city sounds; then, he turned to digital composite paintings that "beamed" him up for a little healthy escapism, as he hopes they do for you too.

From his website: My own journey to making Star Trek artwork and short-stories was an accidental one. It began one day when I dusted off some old Star Trek ship toys from my childhood and started photographing them. The next thing I knew, I was making complex collages in PowerPoint that developed into full-fledged action sequences. Subconsciously, I think I was rediscovering the old tracing paper “collages” I did as a child—tracing the Enterprise, Klingon D-7s, Romulan Warbirds, and shuttles from my copy of “The Art of Star Trek,” making space scenes and battles with them.

In a similar fashion, my artwork can be thought of as a collage of photographic elements that are masked, combined, and overlaid painstakingly to produce the final image. There can be upwards of a hundred individual elements per finished piece. Most of the background photography is my own, but occasionally, if a space scene was needed, I reached out to NASA’s public domain photo collection—or other public domain imagery.

As such, my art style is an homage to traditional, pre-3D animation special effects that relied on models and real film footage to produce photographic composites, which are to still some of the most iconic images in cinematic history.

Slowly, I opened the door into this world, trying to visualize the scenes that had played in my own imagination as a child, watching the TOS movies, The Next Generation, Deep Space 9, and Voyager. I wanted to see a refitted Galaxy class Saucer landing on a mysterious planet on the edge of the Federation frontier, a Romulan Bird of Prey arriving back at Romulus after a successful campaign against the Klingon Empire, the Borg excavating a “sample” of a Federation colony for analysis and assimilation, and Defiant class starships messing around in atmosphere—all images that fueled my imagination.

Before I knew it, I had produced a large collection of art that went no further than my own computer screen. My brother saw a few samples on day and suggested other Trekkers might enjoy them. So, I began sharing my art weekly on a dozen or so Star Trek Facebook groups and that is when the stories started. I found I couldn’t post the art without sharing the klaxons, smoke, phaser fire, and feats of daring-do that the images had inspired in my mind.

My desire with this artwork is that it will also fire your imaginations as you pass from ship to ship, jumping from location to location like a Q being – disguised as a “fly-on-the-wall”, observing the actions and adventures of starships and their crews on the edge of the final frontier.

I am not an “artist” in the official sense of the word—just a kindred soul who longs to travel the vast unmeasured sea of stars and share these dreams that inspire me.

I hope they inspire you also, and that you enjoy the journey as much as I have had making it.

Bret Smith
5.0 out of 5 stars Really cool paperback mixing snippets of stories with starships and NASA images
Reviewed in the United States 🇺🇸 on April 21, 2019
Verified Purchase
Nathan assembled some fun pieces of art with collages of familiar Star Trek starships and images from space and other photographic sources for a great little art book. Images are placed inside graphics that evoke ST-TNG and each image has a snippet of associated storyline. The stories are available for free on Nathan's website.
Read more
Helpful
Report abuse

Nivek Yentrouc
5.0 out of 5 stars Really interesting artwork, a must for any Trekky
Reviewed in the United States 🇺🇸 on April 25, 2019
Verified Purchase
Great imaginative and original Star Trek artwork with scenes never before witnessed in this galaxy or any other. Definitely add this to your bookshelf because the visuals will add greatly to your reading.
Read more
Helpful
Report abuse

Wentai
5.0 out of 5 stars Excellent
Reviewed in the United States 🇺🇸 on April 19, 2022
I love this book. He as a wonderful stack of art on DA and from there it led me to this amazing book. What an amazing collection of art.
Lonely? I’d suggest getting this art book and leaving it on your coffee table. It will spark conversations and make people like you more. You could use that, I can tell.
Highly recommended.
My 2 favorite art books from Amazon:
- Icon by Frank Frazetta
- Great Fighter Jets of the Galaxy 1 by Tim Gibson
Read more
Helpful
Report abuse
See all reviews

it's a great delight & big pleasure paging through this booklet but stopping each page watching closer the details of all the starships and the sceneries "Between Heaven and Earth" from artist Nathan Warner walking through the stars' galaxy of fantasy in combining Star Trek memories in being Trekkie as only Trekkie can ... and therefore let me give you - readers & fandom - the advice buying this colorful artwork in learning more about what can be created of your own imagination in dreaming of more what the phenomenon of the world among the starry sky could give you & us all ... enjoy! our timeline proceeds to future, the undiscovered country
Read more
Report abuse
Translate review to English
See all reviews