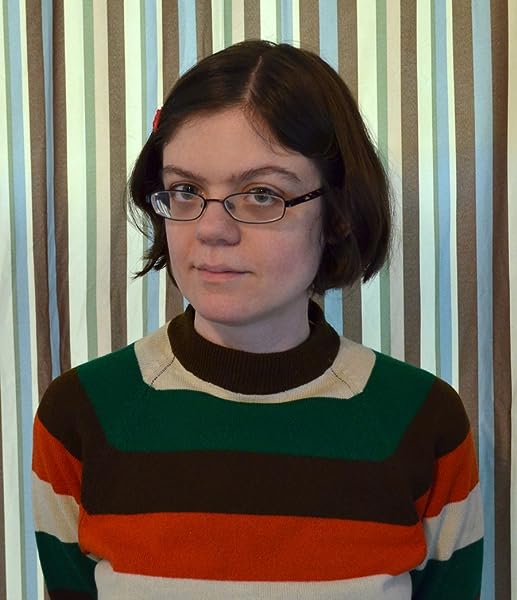 JACLYN DOLAMORE's first book was Magic Under Glass. She spent her childhood reading as many books as she could lug home from the library and playing elaborate pretend games with her sister. She has a passion for history, thrift stores, vintage dresses, David Bowie, drawing, and organic food. She lives with her partner and two black tabbies.

3.4 out of 5 stars
3.4 out of 5
68 customer ratings
How does Amazon calculate star ratings?
Amazon calculates a product’s star ratings based on a machine learned model instead of a raw data average. The model takes into account factors including the age of a rating, whether the ratings are from verified purchasers, and factors that establish reviewer trustworthiness.
Top reviews

Julia Norton
2.0 out of 5 stars A YA that's more middle school oriented.
Reviewed in the United States on December 27, 2011
Verified Purchase
I don't know what has happened to me, but I've recently been obsessed with mermaids. The kind of obsession where you want to dye your hair blue and wear starfish pendants and run around on a beach, swimming in the ocean, rubbing yourself down with sand, etc. The fact that it's the middle of Winter only makes this obsession more absurd.

That being said, I've been on the lookout for a good mermaid book. A really good one. I'd never read one to begin with, but I was hoping that "Between the Sea and Sky" would be the one. Sadly, I was mistaken.

"Between the Sea and Sky" follows the story of Esmerine, who has just been belted a siren, as she follows her boy-crazed sister, Dosia, to the surface world. Dosia has been "kidnapped" by a human and Esmerine is hoping to find her, just to see her one last time and to relay to their parents that Dosia is still alive. On her journey, Esmerine meets up with Alandare, a winged boy (Fandarsee) who had been a childhood playmate that never returned. Together they set out to the Diehls to "rescue" Dosia.

Except there really is no rescue because apparently you can't rescue a siren once she's lost her belt. That seemed kind of anticlimatic to me. Oh, there are so many things that didn't sit right with me during this book. I was so confused what age this was suppose to be for! Wendy Darling told me it was for ages 8-12 and I wish I had known that before setting in - I may have enjoyed it more. The story had such potential to go so much deeper than it did. Instead it simply skimmed the surface, destroying what could have been a very dramatic climax.

The relationship between Alandare and Esmerine could have been executed better. There could have been such depth between them - him being a winged creature and her being a creature of the sea. Instead, the author barely skimmed over the hurt and pain they had in not being able to be together. I felt like I was slapped in the face with the shallowness of it.

The relationship between Dosia and Esmerine was another annoyance. Esmerine hasn't seen her sister in months and when she finally does, Dosia practically ignores her. When they finally get a moment alone, they talk about Esmerine and Alandare. There was no depth here! The emotional hurt and turmoil and relief that should have accompanied such a reunion was completely lost in this story.

Not to mention the ending seemed force. I dislike it when authors try and wrap everything up with a nice little bow. It destroys a story.

That being said, there were things I liked about this story. One being the little shop mermaids could go to in order to buy human clothes and walk amongst them. I also thought it was pretty clever how the mermaids feet hurt like hell when they were on the surface world because they're meant to be in the water. A few details Esmerine had about how the air felt strange, she felt dirty without the saltwater, the clothes, etc. were all nice details that made the story bearable.

If the age range is 8-12, then perhaps that clarifies why there was no real emotional turmoil or depth, however I wish that she had not made so many mentions of lust and sex (even if they were few). Eight year olds certainly do not need to read something like that when many eight year olds may not even know what sex is.

I am still searching for that perfect mermaid book, but I don't regret reading this story. I just wish I had understood the age range before I began. On a random note, I adored the title.

This review can be found at The Drifting Bookworm.

The Book Scout
5.0 out of 5 stars Beautifully Written and Magical Adventure!
Reviewed in the United States on November 20, 2011
Verified Purchase
Jaclyn Dolamore has a magical and captivating writing style that I adore. Ever since reading her debut, Magic Under Glass, I have been eager to see what her next project would be and Between the Sea and Sky did not disappoint. The premise of Between the Sea and Sky was one of the first things that intrigued me about this book and I can honestly say that it lived up to my expectations. This is one book that is more than deserving of it's gorgeous cover. I will definitely be recommending this book to everyone!

Mermaids, winged people, and humans- oh my! The concept of Between the Sea and Sky was one of the most original and refreshing of any book released this year. Esmerine is a mermaid who has recently become a siren. She has always longed to become one with her older sister and now that dream is coming true. But nothing goes the way Esmerine expected. Dosia runs away and Esmerine must leave her watery home to find her sister and along the way she meets up with one of her best friends from childhood- Alandare. From there Esmerine's life will change in more ways than she could ever have known.

Esmerine was a fabulously developed character and I loved everything about her. Especially her love of books. It was fascinating to see someone experiencing the joy of reading for the first time and it brought back my own memories of first beginning to read. Esmerine was adventurous and brave and she stopped at nothing to help her family. I truly admired Esmerine and even though Between the Sea and Sky was a relatively short book, I got to know all the characters very well. Esmerine's whole family played a large role in the book, particularly her older sister, Dosia. Dosia's own story was an intriguing and unexpected one and I liked getting to know her. Alandare was another fabulous character. He was a member of a winged tribe that was unlike any sort of creature I have ever read about. Alandare's character was very well done and I liked how he and Esmerine didn't fall into the insta-love category.

Dolamore's world building was another plus in Between the Sea and Sky. The setting was extremely realistic and so well done that I felt like I could just step into the book and join Esmerine's world.

This was an overall refreshing and breathtaking sophomore novel that proved just how great an author Jaclyn Dolamore is. I wish Between the Sea and Sky was getting more attention because it is a gem. This was a true winner with a beautiful story to match it's beautiful cover.

SE42
4.0 out of 5 stars Little Mermaid - updated
Reviewed in the United States on March 29, 2018
Verified Purchase
An interesting take on The Little Mermaid - I liked the additions of other magical creatures and felt that the characters were well-developed. The pacing was a little off, for me, I felt that it rushed into the action without doing a lot of world-building, but that's a total personal preference. I'm sure I'll read it again and catch more nuances than the initial time through, and I plan to look into other works by the author.
Read more
Helpful
Comment Report abuse

Lorin
5.0 out of 5 stars Wonderful Book
Reviewed in the United States on February 12, 2018
Verified Purchase
I enjoyed reading this book. This book has wonderful characters and a wonderful plot. I had a hard time putting this book down.
Read more
Helpful
Comment Report abuse

Amazon Customer
5.0 out of 5 stars A unique short read
Reviewed in the United States on May 9, 2018
Verified Purchase
Quite different from the normal YA books i read. it was a good, although a little rushed in certain areas. I appreciate the fact that Alan wasn't the typical heart throb that appear in most books but a more realistic description of a man with quirks
Read more
Helpful
Comment Report abuse

Kindle Customer
2.0 out of 5 stars Not for me
Reviewed in the United States on July 2, 2018
Verified Purchase
I tried to read this one, but ran into a cuss word, so I had to quit.
Read more
Helpful
Comment Report abuse

Radnara
5.0 out of 5 stars Good
Reviewed in the United Kingdom on March 3, 2018
Verified Purchase
Thank you
Read more
Helpful
Sending feedback...
Thank you for your feedback.
Sorry, we failed to record your vote. Please try again
Report abuse

Lesley Barklay
2.0 out of 5 stars only to realise the girl is happily married.
Reviewed in Australia on February 12, 2018
Verified Purchase
This retelling of The Little Mermaid had the benefit of including the fact that mermaids on dry land experience excruciating pain when they walk.
Otherwise, there was a lot of hype and not much reward. The main character goes to the land to search for her sister, whom she assumes, has been kidnapped. On the way, she meets a childhood friend (who has wings, because, well, why not? I was never really clear on that part), and they rekindle romantic feelings while they search for the sister, only to realise the girl is happily married.
Read more
Helpful
Sending feedback...
Thank you for your feedback.
Sorry, we failed to record your vote. Please try again
Report abuse