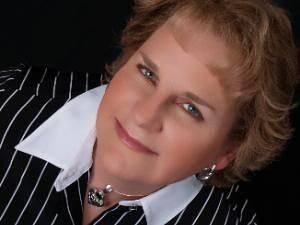 Beverly is always working on her next book, taking the "usual" and twisting it into the "unusual." Whether it's cowboys, shifters, vampires and more, Beverly's books are fast-paced, emotional and hotter than Texas in the summertime.

Stories of Passion and the Paranormal 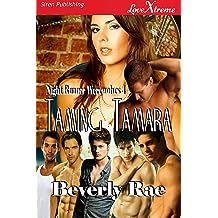 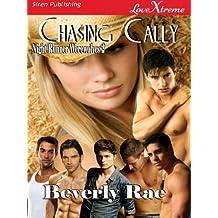 Chasing Cally [Night Runner Werewolves 2] (Siren Publishing LoveXtreme Special Edition) Mar 28, 2012
by Beverly Rae
( 5 )
$4.50
[Siren LoveXtreme Special Edition: Erotic Paranormal Menage Romance, M/F/M/M/M/M/M, werewolves, public exhibition, HEA for M/F] Doing the Coyote Ugly routine at Sadie's Wild Riders Saloon isn't helping Cally Sheridan's dream of writing songs for a living, but she isn't giving up, not like she's given up on her biggest dream, the one she hides deep in her heart. Finding the right man to love and a home filled with a family is an impossible goal, so why keep dreaming about a fantasy that won't come true? Max Matheson wants a night out to knock back a few brews and watch pretty women dance on top of a bar. But when he sees Cally belt out a song and shake her tight little tush, he knows he's found his mate. Trouble, however, follows the beautiful blonde wherever she goes. Taking Cally into the pack is one thing, but playing her knight in shining fur may be harder than he thinks. Note: The heroine of each book will mate with the pack but will end up with one alpha hero. Each hero in the pack will take his own mate in subsequent books. Note: There is no sexual relationship or touching for titillation between or among the men. ** A Siren Erotic Romance
Read more 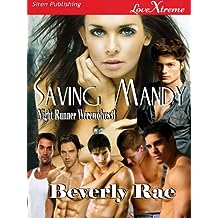 Saving Mandy [Night Runner Werewolves 3] (Siren Publishing LoveXtreme Special Edition) Apr 17, 2012
by Beverly Rae
( 5 )
$4.99
[Siren LoveXtreme Special Edition: Erotic Paranormal Menage Romance, M/F/M/M/M/M/M, werewolves, HEA for M/F] Mandy Garland's father skipped town, leaving her mother alone to raise her. When Decker Royce locates her missing father, Mandy thinks she's found the one man she can trust. Jimmy Lingo knows Mandy's his true mate and has sent her dreams of six men who pledge both their bodies and their hearts to her. But Mandy's father is a girl's worst nightmare. Owing thousands from gambling losses, her father is under the thumb of a rival werewolf pack and isn't above selling Mandy to the leader to pay his debt. Determined to save Mandy from marriage to the other pack's leader, Jimmy takes her to the Matheson Ranch, but the rival werewolf refuses to give her up. A battle for love and money brings the truth to the surface. Will Mandy sacrifice her happiness to save her father? Or will she accept Jimmy's love and become a Night Runner werewolf? Note: The heroine of each book will mate with the pack but will end up with one alpha hero. Each hero in the pack will take his own mate in subsequent books. Note: There is no sexual relationship or touching for titillation between or among the men. ** A Siren Erotic Romance
Read more 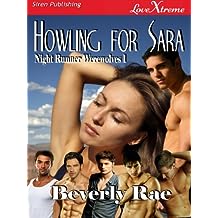 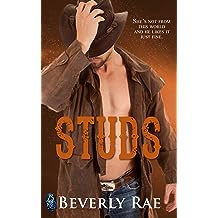 Studs Nov 24, 2017
by Beverly Rae
$2.99
Fun and chaos are unleashed when a sister and brother supernatural duo wreak havoc on an unsuspecting Texas cowboy, his friends and his horse breeding ranch. With their ability to "push" emotions into humans, this sexy brother and sister are out to change the rules of love. Even if they have to get help from a meddling dirt faery.
Read more 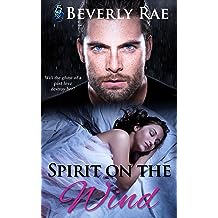 Spirit on the Wind Nov 18, 2017
by Beverly Rae
$3.99
Every night, Christine has sex with her deceased husband, who lost his life in Iraq, but their lovemaking is never brought to a climax. At least, not until a strange woman brings her a magical stone that will make Johnny really come alive in her arms. Yet when a dark spirit invades her bed and her body, Christine must choose between nights of passion and a life of love. Will she succumb to the dark spirit? Or will Johnny save her body and her soul?
** Edited and revised. Previously released. Adult Content 18+ only.
Read more 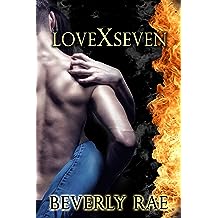 Loves Times Seven Nov 17, 2017
by Beverly Rae
$3.99
Kat Carlton, a feisty witch, transforms a handsome man and his six less-than-desirable brothers into drop-dead hunks to save her dating business, Romance Magic, Inc. Her two witch sisters, horrified to learn she's married a mortal, throw a devastatingly debonair wizard into the mix to woo her away from her new hubby. From outrageous spells to hilarious curses, everyone gets in on the action. 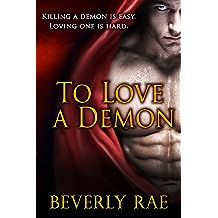 To Love a Demon (Para-mates Series) Nov 17, 2017
by Beverly Rae
$5.99
Jennifer rushed into a quickie marriage to devilishly handsome Blake. But as a Level 10 Protector, her job is to hunt down gargoyles, zombies, and other evildoers of the Otherworld, not play housewife to her sexy man. Her mission? To find the Bracelet of Invincibility before a demon lord can use it to destroy mankind.

Blake will do anything to regain his mortality, including delivering the Bracelet of Invincibility to his demon lord. Too bad his demon lord wants his wife dead, too. With Jenn getting suspicious and his ghoul-cursed brother racing him for the Bracelet, Blake’s running out of time. Can he save the woman he loves? Or will he remain a demon forever?
Read more 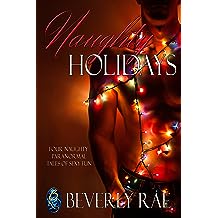 Four naughty holiday books previously released that have been revised and lengthened for your enjoyment. Get hot and bothered during the cold winter nights. Wishing you a naughty holiday! ~ Beverly Rae


SANTA, SEND ME A CONVERTIBLE
Angie's going to win her dream-mobile in a contest for the Ultimate Holiday Spirit no matter what it takes. But Jack has his eye on the sleek blue Porsche, too. They’re after each other in more than one way. Who will win the contest? Will the mysterious Santa—unlike any other Santa—interfere?


I COULD JUST EAT YOU UP!
Sexually-starved Rayne needs to satisfy her hunger for a man. Combining all the ingredients for a recipe of fun and magic, Rayne cooks up more than an anatomically-correct gingerbread man.


THE VIRGIN ANGEL
Free-spirited Cara Williams has never met the one man who could match her wild ways and win her heart. When she meets a mysterious and sexy man, she feels an instant connection with him.

Josh died as a baby and never had a chance to live. He visits Earth to experience life, if only for a few days. But The One-Who-Knows-Almost-All has other ideas.

WARNING: This story contains handcuffs, whips, a studded collar, and some Christmas magic. 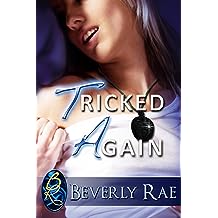 Tricked Again Dec 8, 2014
by Beverly Rae
( 1 )
$3.99
Melissa Martin gets dumped by long-time boyfriend and male model, Derrick, after she gains twenty pounds. With the help of a magical stone necklace, she hopes to get him back.

Using the necklace's powers to make her body appear slim, Mel gets caught in a tug of war between two men. Derrick wants the apparently slim-again Mel back in his bed while Jason, another male model, yearns for the voluptuous Connie, Mel's plus-size "twin" sister.

As if she didn't have enough trouble pretending to be two different women with two different bodies, a snooty female model will do anything to sabotage her efforts to win back Derrick's heart.

Publisher's Note: Like your sex with laughter? How about a little magic, too? Then read on. 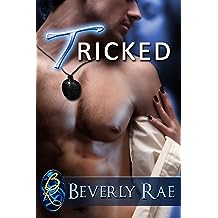 Tricked Dec 8, 2014
by Beverly Rae
( 3 )
$3.99
Jane Riggins, like all the other women working at Barton Enterprises, secretly lusts after the very sexy, very wealthy Brandon Barton, but believes she has no chance to grab his attention. Not when every hot female in the world is ready to lie down with him.

When she meets likable Charlie Hinderman, she sets her sights on the mediocre salesman, giving up her dreams of the debonair Brandon. But Brandon’s finally noticed her, even as her two best friends rig the charity event drawing, making sure one of them will win a date with the billionaire.

With Charlie’s help, she double crosses her friends’ scheme. But fate—or is it magic?—steps in when she wins the drawing and is whisked away on a romantic midnight date with Brandon. Jane, torn between her attraction to both Brandon and Charlie, can’t understand why the two men seem so much alike. From their smoldering eyes to the black stone necklace they wear, each man drives her crazy—emotionally and sexually. 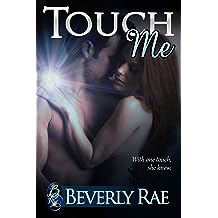 Touch Me Oct 15, 2014
by Beverly Rae
( 12 )
$3.99
Sloan Janson’s best friend gets married days after being matched by a so-called matchmaker. He’s convinced his friend is the victim of a money-hungry con artist. He’d ready to track down the matchmaker and expose her, but from the moment he meets her, he wants to expose her in a much more personal way.

Cally Matthews can tell a person their true love’s name simply by touching them. Although helping people find each other is wonderful, matchmaking is both her gift and her curse. Then when Sloan Janson comes to her small Texas town, ready to discredit her, her special ability goes haywire.

Torn between regaining her ability and hoping for love, Cally must make an impossible decision. Will she make the choice? Or will she run?

*Previously published but has been extensively revised, including an additional epilogue.