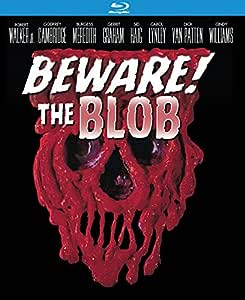 Secure transaction
Your transaction is secure
We work hard to protect your security and privacy. Our payment security system encrypts your information during transmission. We don’t share your credit card details with third-party sellers, and we don’t sell your information to others. Learn more
Details
Ships from
Amazon.com
Sold by
Amazon.com
Return policy: This item is returnable
In most cases, items shipped from Amazon.com may be returned for a full refund.
Read full return policy
Beware! The Blob (1972) a... has been added to your Cart
New & Used (15) from
$14.78 + $3.99 shipping

Newly Re-mastered in HD! The Blob returns... more outrageous than ever in this 1972 sequel to the popular sci-fi classic! Plenty of familiar faces, including Robert Walker Jr. (Ensign Pulver), Larry Hagman (Dallas), Sid Haig (Busting), Burgess Meredith (Rocky), Dick Van Patten (Eight is Enough), Godfrey Cambridge (Cotton Comes to Harlem), Cindy Williams (Laverne & Shirley), Carole Lynley (The Poseidon Adventure), Gerrit Graham (Used Cars) and Shelley Berman (You Don t Mess with the Zohan) add to the fun. A geologist (Cambridge) unwittingly brings home an unusual frozen piece of debris from the North Pole. But when it accidentally thaws, the hungrier-than-ever Blob comes to life again, consuming nearly everyone in its path and terrorizing the town. No one is safe as it crawls into a bowling alley, oozes its way across an ice rink, becoming grotesquely bloated with the blood of its victims... can this bizarre creature ever be stopped? TV legend Larry Hagman directed this cult classic, the only feature film he ever directed upon its 1980s re-release, the film was tagged "The Film that J.R. Shot!".

4.2 out of 5 stars
4.2 out of 5
153 global ratings
How are ratings calculated?
To calculate the overall star rating and percentage breakdown by star, we don’t use a simple average. Instead, our system considers things like how recent a review is and if the reviewer bought the item on Amazon. It also analyzes reviews to verify trustworthiness.

Sharon
5.0 out of 5 stars The Blob has no face!
Reviewed in the United States on December 8, 2016
Verified Purchase
Such a hokie and fun movie, fondly remembered from my drive in movie days. It begins with a cute little kitten bouncing through the grass and the flowers and for an animal lover like myself, I'm thinking, "Not the kitten!" The kitten is the best part of this movie. An ignorant man brings home a thermos clearly marked "Keep Frozen" and it gets left out on a kitchen counter. Of course, the Blob takes over once again. Teenagers today will probably enjoy the lame script, the hairstyles and the clothing of the 70's. Those of us from the 70's and 60's will think, what happened to fun horror films?
Read more
6 people found this helpful
Helpful
Report abuse

Space Shot
5.0 out of 5 stars Awful! Loved it!
Reviewed in the United States on September 8, 2019
Verified Purchase
Wow, what an awful movie! I love sci-fi movies with plenty of "cheapness" (Zappa's term for low budget monster movies). Usually I don't bother with movies from the 70s because the 1950s Sci-Fi is so much more fun. This movie is an exception. I don't want to give away the "plot", but I wonder how much Jell-O was required to make this feature? The acting was awful, the special effects were terrible, and the "hippies" were ridiculous as were the police. However, that Blob was very very angry! I loved this movie. A classic.
Read more
One person found this helpful
Helpful
Report abuse

Chad Storm
5.0 out of 5 stars I LOVE THIS FILM!!!!
Reviewed in the United States on October 28, 2016
Verified Purchase
I am probably the only guy out there who loves this movie. Was it awesome? No. But it's fun to watch for what it is: A film that doesn't take itself too seriously. I remember watching this as a kid and being scared. I have no idea why. The scariest scene is when the blob crawls up the legs of Chester's wife. And the ending when part of the Blob unthaws and creeps down its former self and hits the sheriffs foot and he looks at the camera and says, "What?!?" The End?

Does that mean The Blob evolved? We will never know. There was evidently a sequel in the works and in pre-production but it never saw the light of day. Most likely because the movie was not well received.

I just ordered the Blu-Ray and I am looking forward to seeing the film as it was originally intended. The release to DVD back in 2000 was still very dark. You can't see the Ape-Suited guy get eaten when his dune buggy runs into it. I'm sure the commentary is quite interesting. Anyone associated with this films who is still alive barely speak about it when asked.

I will post another review after I watch it.

R. L. Matsui
4.0 out of 5 stars Wonderfully wacky 70's fun!
Reviewed in the United States on May 1, 2012
Verified Purchase
Roger Corman once mentioned in an interview something to the effect that when he looked in on the filming of a comedy, he knew everything was all right if the cast and crew were joking and laughing and having a good time. In his experience, that energy would translate to the screen and the picture would be funny and enjoyable.

Although Corman did not produce this particular picture, "Beware! The Blob" looks to me to be exemplary of this kind of thinking. The cast was obviously enjoying the experience of making the film, and we, the audience, get the benefit. A certain sense of giddy frivolity is evident.

This movie is not a work of genius. It's not trying to be serious at all; this is a cinematic Slurpee or a hot-dog for the mind. It is not for the stodgy or inflexible viewer. It's for the viewer who wants to relax for a little while and have a few laffs! It's a horror comedy made in the early 70's--you should know what to expect and what not to expect.

I would say this sequel to the (excellent) "The Blob" is played half-seriously, and that's why I find it so strange and refreshing. Sometimes it's a raucous farce. Sometimes it's straight horror. And oddly enough for a 70's film, it seems to know when it is being one or the other, and keeps true to whatever it is at that moment. It's not nearly as badly made as many of its detractors claim.

Watch it for the pea soup-thick 70's atmosphere. You'll feel as if you've entered another world. Watch it for the inventive low-budget special effects. A few shots look pretty nice even today. Watch it for the scene with the bald would-be victim guy in the bathtub, who throws the phone through the window when he sees the gelatinous menace oozing under his bathroom door, and who is then seen running starkers through the streets, shouting, while funny music plays. "Beware! The Blob" is extremely goofy, exciting, brightly-colored fun stuff. It is extremely representative of the era in which it was made.

There is NO movie that entertains the way this one does. See it and treat yourself to a fun bit of film!
Read more
14 people found this helpful
Helpful
Report abuse
See all reviews

stephenkingrules
2.0 out of 5 stars A bit of a snoozer, but glad it got a release
Reviewed in Canada on December 2, 2018
Verified Purchase
A decent transfer of this lost relic.
Read more
Report abuse

Andy Willey,film historian.
5.0 out of 5 stars so the movie sucks, but what fun
Reviewed in the United Kingdom on July 6, 2015
Verified Purchase
Ok,so the movie sucks,but what fun,better than the first ,what can you say,if you love these type of films then this one is for you,go for it!!!!!!!
Read more
One person found this helpful
Report abuse
See all reviews