You've subscribed to Ruthless Doms! We will preorder your items within 24 hours of when they become available. When new books are released, we'll charge your default payment method for the lowest price available during the pre-order period.
Update your device or payment method, cancel individual pre-orders or your subscription at
Your Memberships & Subscriptions
There was an error. We were unable to process your subscription due to an error. Please refresh and try again. 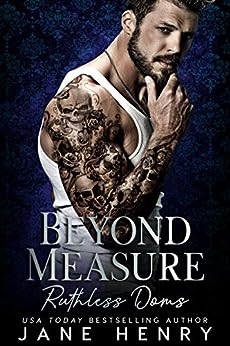 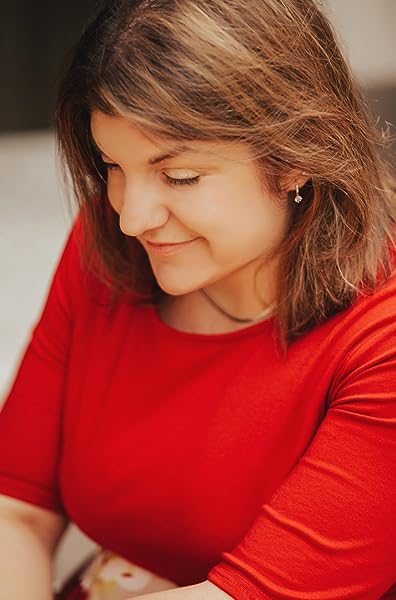 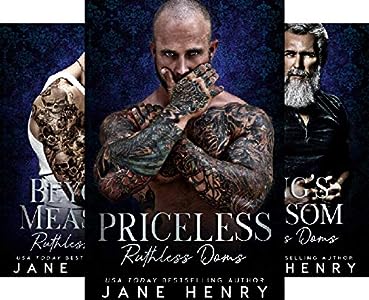 "Oh. My. Goodness!! My heart was simultaneously pounding and melting while reading Tomas and Caroline's romance! Heart pounding, intense, and so steamy!" ~ Goodreads reviewer
"Phenomenally well written, with enticing characters so worthy of the happiness they seek, I suspect Beyond Measure is the BEST Bratva Romance this year!" ~ BKoe reviews
"Passionate, raw, emotional and gritty." ~Goodreads reviewer

4.6 out of 5 stars
4.6 out of 5
284 global ratings
How are ratings calculated?
To calculate the overall star rating and percentage breakdown by star, we don’t use a simple average. Instead, our system considers things like how recent a review is and if the reviewer bought the item on Amazon. It also analyzes reviews to verify trustworthiness.

Lady Reading
4.0 out of 5 stars Best kind of Alpha, Dark Romance Hero...(aside from the crime boss thing)!
Reviewed in the United States on November 3, 2019
Verified Purchase
I don't normally go for mob style (or in this case Bratva...Russian Mob) romances. Mostly because these guys are truly bad guys who do evil things. Don't get me wrong, I love a good bad boy (how's that for an oxymoron?). What I mean is, I like a tough, alpha guy, one who's a little domineering and maybe has done some bad things to protect someone. But when you're dealing with Mob guys, you're dealing with REAL bad guys, the ones who deal in drugs, prostitution, sex trafficking and murder not just in self defense or protection of someone but because the victim was a rival or crossed them. They're more than bad guys, they're criminals and in most of these stories, not being redeemed, but remaining in the criminal life. So yeah, not really into that!

That being said, this story deals very little with the criminal aspect, though it is mentioned and you know his crime family deals in drugs. But mostly it deals with Caroline (the heroine), sister of a Russian, minor crime leader in San Diego, and the abuse she suffered (from her brother and his right hand man (and best friend).) You get only a little history of this before the brother has agreed to give his sister as a bride to a Boston "pakhan" (leader of Russian crime family) in order to satisfy a debt owed. (The brother's friend was not happy about that). The remainder of the story deals mostly with the developing relationship between Caroline and her new husband as well as an attempt by the brother's best friend to get her back.

This is a dark romance so there are some bdsm scenes. The H (the husband, does demand respect and obedience and yes she doesn't always obey and earns spankings, but most are pretty tame. Mostly the hand, a paddle an belt are used and no damage to skin occurs. There is only one scene where a flogger is used and some description used may give the impression that there are "cuts" but upon further reading you realize it probably didn't mean actual cuts that draw blood. In fact, at the end of this scene, the Heroine actually admits that she "needs that intensity" sometimes! And by this point in the book, the author has done such an excellent job of building the story and the heroines introduction to the life style as well as her discovery that she is not only turned on by it, but "needs" it that it's all very believable.

You might ask how an abused woman would be into bdsm (I usually do and find it hard to believe). But in this case, while Caroline was raped by the brothers best friend ,(the brother never believed her), most of the abuse she suffered from both was emotional and mental. The kept her hidden and constantly called her whore and told her she was ugly, worthless and no one would want her. Her husband, on the other hand, thinks she's beautiful and precious and treats her well and never takes her against her will. Even the spankings mostly end with mind blowing, mutually agreeable, sex!

All in all, aside from the crime boss thing, the H is the best kind of alpha, dark romance hero and I really did enjoy this book. If you're into the Mafia or Bratva type romances, you'll love this!
Read more
14 people found this helpful
Helpful
Report abuse

Mobookworm
5.0 out of 5 stars Amazing chemistry!!
Reviewed in the United States on October 18, 2019
Verified Purchase
Wasn't what I was expecting at all, as the Pakhan Tomas is expected to be strong, fearless and obeyed immediately with respect. He doesn't go about his marriage in the way I expected. He knows how to get what he wants in surprising ways.
Caroline has been abused and scarred by her life in the Bratva, not the place she wants to live her life but she sees no hope of a better life.
These two had chemistry from the beginning and I loved how they learned and interacted with each other
Have to say I never expected to love a series like this, just goes to show that great writing can pull me into the story, no matter what.
And I'm already ready for more......certain side characters need a story too
Read more
6 people found this helpful
Helpful
Report abuse

Bobbi Koe
5.0 out of 5 stars Another EPIC and erotic dark BRATVA Romance! A total MUST-READ!!
Reviewed in the United States on October 19, 2019
Verified Purchase
OMG! I absolutely LOVE this story!! Phenomenally well written, with enticing characters so worthy of the happiness they seek, I suspect BEYOND MEASURE is the BEST Bratva Romance offered on Amazon this year! It is a wonderfully romantic love story of Tomas and Caroline, who as individuals were immersed in a world full of darkness and violence. Yet together find that past overshadowed by the healing empowerment of unconditional love. Their story is EPIC, captivating, and pulled on every emotion! I could not put BEYOND MEASURE down until I had read every last word! And then I read it again! While I voluntarily read an early copy of BEYOND MEASURE this is one novel, I will purchase to support the very talented author, Jane Henry. BEYOND MEASURE will also be placed in the FAVORITES collection on my Kindle. Even though this is my HONEST and VOLUNTARY 5+STAR review, I wish I could give BEYOND MEASURE ten stars more! Seriously, get your copy of this fantastic romance today. Happy pages! 😉
Read more
3 people found this helpful
Helpful
Report abuse

L. Tindal
5.0 out of 5 stars Beauty and the Beast
Reviewed in the United States on October 22, 2019
Verified Purchase
Needless to say, Jane Henry listens to her readers. Delivering a stubborn, mouthy and flawed heroine, this time around. And, although Larissa is my favorite, Caroline definetly made a memorable impression.

What can I say? I was eager to crack this book open. And delve into this fascinating world of dom/sub. If you have read other books, from this series. The men tend to be the same. The females, not so much. And there is where the magic is. I love to see the heroines break down, and finally submit. Emotionally and physically to their mates. To have any and every, desire handled. By a man that worships and protects them, if only?😳

I laughed so, much at the banter and power struggle. Between Tomas and Caroline, and I was pleasantly suprised. That she stood up for herself. Even, still when falling for Tomas.

This was the second best, out of the series for sure. Bratva’s Bride will always be my favorite. As it introduced me to this genre of books and for that, I will forever be a fan.

Joy
5.0 out of 5 stars Love the Bratva Men!!
Reviewed in the United States on November 12, 2019
Verified Purchase
I love books based on the Bratva men, and this one definitely doesn’t disappoint. When Tomas (and his closest advisors) suggest he marry, he decides to take a bride as payment of a debt. When he meets Caroline, she is not at all what he expected, and so much better. While he would never admit it, he is instantly smitten with her, but can he tame her attitude? She has had a rough life and only expects bad things to happen, so when Tomas shows a different side, she isn’t sure how to handle that. Tomas is an all alpha male, and has a dark side to him, but at times his soft side does show thru. These two characters are vastly different yet so perfect together. Can they build a marriage when they don’t even know each other? I loved this story because you could never guess where they would end up, so I just had to read it in one sitting to find out! I really enjoyed this story and look forward to reading more by this author.
Read more
One person found this helpful
Helpful
Report abuse
See all reviews

Elizabeth White
5.0 out of 5 stars I have now read all three books
Reviewed in the United Kingdom on February 14, 2020
Verified Purchase
The books in the series are full of girls who have had a hard time and are now in the hands of a senior bratva. These guys are tough, muscled, tattooed and deadly! Falling for them could be very bad news. They could also be incredibly protective and loving. These books have it all and are worth reading!
Read more
One person found this helpful
Report abuse

Kindle Customer
3.0 out of 5 stars Enjoyable but quite a short story
Reviewed in the United Kingdom on November 18, 2019
Verified Purchase
I did enjoy this book but found it quite short. Also seemed to be a bit short on content as it was just about one subject and not what you would expect running a business
Read more
Report abuse

Amazon Customer
5.0 out of 5 stars Beyond Measure A Dark Bratva Romance
Reviewed in the United Kingdom on December 3, 2019
Verified Purchase
Another great book they are so good I can’t read them fast enough I have loads to read so for now I’ll read the books I’ve got thanks
Read more
Report abuse

Marie
5.0 out of 5 stars Good
Reviewed in the United Kingdom on February 6, 2020
Verified Purchase
I love it I couldn't put it down
Read more
Report abuse
See all reviews