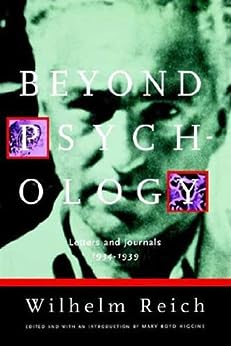 In August 1934, Wilhelm Reich was suddenly expelled from the International Psychoanalytic Association. The result was the extraordinary widening of his scientific interests, scrupulously documented in these journals and letters. They record his pioneering laboratory experiments to verify the reality of the pleasure function and his discovery of a previously unsuspected form of energy that exists in all living matter.

Ostracized as a charlatan, divorced from his embittered wife Annie Pink, under attack by Freudians and communists alike, embattled emigre sexologist/psychoanalyst/socialist Wilhelm Reich spent the years covered by this collection mostly in Norway, having fled Hitler's Berlin in 1933. Opening with his expulsion from the International Psychoanalytic Association at the instigation of orthodox Freudians, this unbuttoned autobiographical portrait reveals Reich's preoccupation with his theory of sexual repression, which he identified as an underlying cause of neurosis, fascism and cancer, among other ills. Reich's lab experiments seeking a bioelectrical basis of sexual energy and life, and his controversial cancer research are recorded here. We see his anguish over his separation from his two young daughters, and his tortured affair with dancer/political activist Elsa Lindenberg, which ended with his relocation to New York City in August 1939. Higgins is trustee of the Wilhelm Reich Infant Trust Fund in New York City.
Copyright 1994 Reed Business Information, Inc. --This text refers to an out of print or unavailable edition of this title.

Madness and pathos alternate in these selections from the controversial psychoanalyst's (18971957) papers, which document the scientific delusions and personal difficulties that preoccupied him from the mid-1930s through his immigration to America on the eve of WW II. Because materials remain missing, this sequel to 1988's Passion of Youth: An Autobiography, 18971922 begins in 1934. In the intervening years of 192333, Reich's studies of the function of the orgasm and of genital sexuality's effects on character found him moving from psychoanalysis toward physiology and biology. Settling in Oslo, Reich put his radical political activism on the back burner while beginning a new program of experiments to examine nothing less than the fundamental energies of life. The excerpts from his journals and letters collected here form a streamlined narrative of his struggles to gain recognition for the theories to which this work gave rise. Reich believed that his insights represented ``the greatest discovery of the century.'' Readers need not be molecular biologists, however, to be skeptical of this claim: The laboratory jottings reproduced here seem like so much hocus-pocus. Meanwhile, Reich's ravings (``the living arises from the nonliving!!'') escape the lab to infect his accounts of a disintegrating home life. He can't seem to reflect personally on sex without proclaiming, ``My theory is correct!'' His children remain alienated from him, and his lover leaves him, but Reich consoles himself with the idea that his suffering is that of a man of genius. With his 1939 ``discovery'' of orgone, Reich seems to have gone over the edge for sure: ``I yearn for a beautiful woman with no sexual anxieties who will just take me! Have inhaled too much orgone radiation.'' At this point, the deepening shadow of Nazi expansion forces the Jewish and communist Reich's emigration to a credulous New York. Reich comes across as a crank, but a human figure all the same. Ideal material for a screenplay about a 20th-century mad scientist. -- Copyright ©1994, Kirkus Associates, LP. All rights reserved. --This text refers to an out of print or unavailable edition of this title.

In August 1934, without warning or explanation, Wilhelm Reich was expelled from the International Psychoanalytic Association. Political expediency and the organization's growing adherence to Freud's death instinct theory had prevailed over Reich's scientific efforts to understand the functioning of what Freud had termed "libido". The provocative originality of Reich's work in the years to follow would inevitably distance him from Freudian psychology. But the result was an extraordinary widening of his scientific interests, scrupulously documented in these journals and letters. They record his pioneering laboratory experiments to verify the reality of the pleasure function and his discovery of an unknown energy that exists in all living matter. They record, too, the anguish of a man unafraid to speak his truth in the face of attack and defamation, even though it cost him his profession, his homeland and his adopted country, his wife, his two children, and his lover. In her introduction to the volume, Mary Boyd Higgins of the Wilhelm Reich Infant Trust considers key events and themes of Reich's life and work during the years leading up to 1934. --This text refers to the paperback edition.

Wilhelm Reich, a native of Austria, was born in 1897. His many works include Listen, Little Man!, Character Analysis, and The Mass Psychology of Fascism. He died in 1957. --This text refers to the paperback edition.
Read more

Robert Olsen
5.0 out of 5 stars A superb book for anyone interested in Reich
Reviewed in the United States 🇺🇸 on February 14, 2001
Wilhelm Reich was many things in his lifetime- a student of Freud, a political activist, a research scientist, and an inventor. His work was decades ahead of its time and is finally being rediscovered and reevaluated by the public. If, like me, you are interested in Reich and his work, you might want to check out a novel called We All Fall Down, by Brian Caldwell. it draws heavily on Reich's theories, particularly Listen Little Man and The Mass Psychology Of Facism. It's a great introduction to Reich's work and the entire novel draws heavily on his theory. It's very interesting watching an author explore his theories in a fictional setting. Well worth reading.
Read more
8 people found this helpful
Helpful
Report abuse
See all reviews
Report an issue
Does this item contain inappropriate content?
Report
Do you believe that this item violates a copyright?
Report
Does this item contain quality or formatting issues?
Report