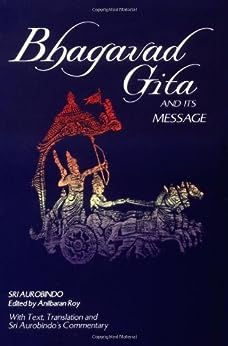 by Sri Aurobindo (Author), Anil Baran Roy (Author) Format: Kindle Edition
See all formats and editions
Sorry, there was a problem loading this page. Try again.
This translation and commentary also analyzes the causes of problems individual and collective, and how to achieve peace, unity and bliss.
Read more
Previous page
Next page

Rama Rao
VINE VOICE
4.0 out of 5 stars The wisdom of Sri Aurobindo
Reviewed in the United States 🇺🇸 on January 14, 2019
Verified Purchase
The essential message of BhagavadGita according to Sri Aurobindo is the evolutionary philosophy. His principle work, Life Divine differed from the traditional teachings of Hinduism. His message was that liberation from the cycle of life & death is not the essence of creative power, but it is through the operation of physical laws that govern matter and energy in spacetime. He asserts that the creation of advanced living beings is the work of super-mind that would create values such as love, harmony, unity and knowledge to find the divine truth. The Brahman described in Vedanta philosophy of BhagavadGita and Upanishads is that He has no attributes, but It is an entity that encompasses omniscience (infinite knowledge), omnipotence (unlimited power), omnipresence (present everywhere), Omni benevolence (perfect goodness), immutable, divine simplicity, and eternal existence. His qualities are personal and impersonal. Brahman is thought to exist in space-less and timeless dimensions in an unchanging reality amidst and beyond the realm of a universe. He is the Pure Consciousness, the Supreme Lord who can transcend all possible laws of physics, all dimensions and all physical realities in the multiverse. Aurobindo suggested that the physical reality we observe, and experience is manifested as empirical reality through His līlā, or Divine Play. He did not believe that physical reality is an illusion (Maya) as Vedanta philosophy proposed but argued that world with new advanced species understand reality. He reasoned that the evolutionary theory described the process but does not explain the wisdom of creating life. According to him, our existence is a manifestation of Brahman, which imbibed life into matter, and then into mind and consciousness. Thus, all existence and the evolutionary process is due to the power of the Pure Consciousness. This is a spiritual evolution which Aurobindo understood through the practice of yoga, meditation and wisdom of yoga philosophy.

In BhagavadGita, Lord Krishna makes a distinction between Samkhya and Yoga. In addition, His teachings also focus on Vedanta philosophy that is highly colored by the wisdom of the former two philosophical systems. According to Aurobindo, Samkhya and Yoga, taught in Gita are not two different philosophical systems but differ only in their methods and starting points. Samkhya is dualistic, but it is not the same as relative dualism, referred to as Dvaita Vedanta. Samkhya claims absolute duality, and the existence is attributed to two different principles interacting in the fundamentals of creation. The Purusha, the pure consciousness is immutable, immortal and self-luminous, and Prakriti is matter and energy that confers physical reality. Pure consciousness, the Purusha is beyond the boundaries of mater, energy and spacetime, that is It is beyond the realm of physics. But all the sufferings, the cycle of birth & death, ignorance, action and inaction, happiness, joy and sorrow are due to Prakriti, says Sri Aurobindo.

This book is very well written and reads flawlessly. Readers interested in Aurobindo’s interpretation of Gita find this work interesting. I did not take time compare Aurobindo’s English translation with other works but found some of his translations illuminating.
Read more
6 people found this helpful
Helpful
Report abuse

Saptarshi
5.0 out of 5 stars Will help you perceive action in this material world with a deeper sense of meaning
Reviewed in the United States 🇺🇸 on September 3, 2020
Verified Purchase
In Rishi's words - The Gita tries to reveal the highest truth that has the highest utility. So far reading every page has helped me develop a deeper sense of meaning in my life and actions. Hope it helps you too!
Read more
Helpful
Report abuse

Donna Miesbach
5.0 out of 5 stars This is truly a rare find
Reviewed in the United States 🇺🇸 on June 17, 2010
Verified Purchase
I've read and studied several interpretations of the Gita, and this is by far the most profound of all. Aurobindo's translation is clear and readable. What makes this book invaluable is his commentary which describes the heights to which the human soul can soar, and opens vistas to the reader which defy all description. It is best to take your time with this book. Read it with your heart. Listen with your soul. And when you have finished, start over and read it again. It is a rare opportunity to be able to explore such heights. Aurobindo makes that possible in a way that only he can.
Read more
17 people found this helpful
Helpful
Report abuse

Health enthusiast
5.0 out of 5 stars Enlightened writing
Reviewed in the United States 🇺🇸 on October 7, 2016
Verified Purchase
One of the best translations and commentaries on the Geeta I have ever read. It's not an easy breezy read. And rightly so, because the concepts dealt with are no easy and simple ones. The writing delves deep into the complexity of the subject and extracts such deep insights. Enlightened book.
Read more
4 people found this helpful
Helpful
Report abuse

Arun M
5.0 out of 5 stars A very good book.
Reviewed in the United States 🇺🇸 on December 18, 2013
Verified Purchase
This is a great book. A very unbiased and clear elucidation suitable for anyone interested in understanding the great work that is Bhagavad gita. I was in search of a translation that was as original as possible to the real text with any additional commentary-which inevitably is colored by the author's viewpoints- clearly demarcated. In this case even the commentaries were very objective, free of any kind of propaganda, unlike many other translations.
Read more
2 people found this helpful
Helpful
Report abuse

manipadma
5.0 out of 5 stars Gita in its own light
Reviewed in the United States 🇺🇸 on January 26, 2011
Verified Purchase
This version compared to Sri Aurobindo's 'essays on Gita' from which this is derived is the one i was looking for since long. I like the verse and meaning style with huge footnotes. The footnotes are from Sri Aurobindo's abridged essays and individual verse in sanskrit and its meaning make it open to understanding from the source for those who love Sanskrit.
Truly a great work for the nation of Bharat and the world.
Read more
5 people found this helpful
Helpful
Report abuse

Tony Pena
5.0 out of 5 stars Great Commentary on the Gita
Reviewed in the United States 🇺🇸 on November 10, 2013
Verified Purchase
I have several commentaries on the Bhagavad Gita, all of which offer fresh perspectives. I have always found Aurobindo's writings to be insightful and this commentary is no different.
Read more
4 people found this helpful
Helpful
Report abuse
See all reviews
Report an issue
Does this item contain inappropriate content?
Report
Do you believe that this item violates a copyright?
Report
Does this item contain quality or formatting issues?
Report