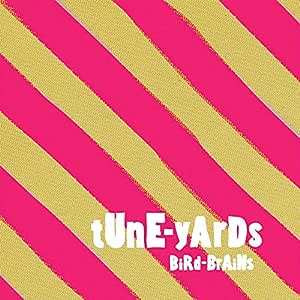 Merrill Garbus' aka Tune-Yards is as experimental as it gets. Producing a debut album in Lo-fi is about as risky a move as you could imagine. She joins bands such as the Vivian Girls in using the intentionally underwhelming technique. If you don't already know, Lo-fi is when the standard of recording is intentionally reduced to achieve a particular sound. This sound can be created using numerous techniques, however Garbus decided to create this album on a laptop and some free software, before being released on a 'pay as you like' basis. Quite a way from X factor isn't it? This is an album that contains numerous styles and sounds. Hatari for example begins with African chanting before switching in a split second to the sound of ukulele. The ukulele is a permanent fixture throughout Bird Brains but it's at its best on News. Providing the bedrock for the track is a constant drumming that merges perfectly with a set of yodelling vocals. In-between tracks the listener is often greeted by the voice of children as well as random sounds recorded in Garbus' home. These techniques only add to the 'at home' theme of this album. Despite the crazy experimenting throughout the album, there are tracks which display orthodox song writing patterns. An example of this is Fiya, containing a very Elvis 'you were always on my mind' it's easily the most pop track on the album and is also where the production comes off best. Throughout this album you feel like you and the artist are alone in a room while she plays the album to you for the first time. It sounds improvised yet fresh and contains brilliant drum beats as well as an array of atmospheric vocals. A great example of home recording and low-fi production.

4.5 out of 5 stars
4.5 out of 5
28 customer ratings
How does Amazon calculate star ratings?
Amazon calculates a product’s star ratings based on a machine learned model instead of a raw data average. The model takes into account factors including the age of a rating, whether the ratings are from verified purchasers, and factors that establish reviewer trustworthiness.
Top reviews

Jack Neidinger
5.0 out of 5 stars Greatest of all homemade kitchen sink records.
Reviewed in the United States on March 2, 2019
Verified Purchase
I record at home myself and this is the template and standard I aspire to. Wish I had a voice to match.
Read more
Helpful
Comment Report abuse

Moberhau
5.0 out of 5 stars So great.
Reviewed in the United States on August 6, 2013
Verified Purchase
This album is so much fun. I really love it. As a musician myself, it's also encouraging to know that this album was recorded and produced on the simplest of gear - makes me feel that I might be able to do it, too!
Read more
One person found this helpful
Helpful
Comment Report abuse

pelin
5.0 out of 5 stars Five Stars
Reviewed in the United States on November 3, 2015
Verified Purchase
one of my favorite newer bands due to their originality
Read more
Helpful
Comment Report abuse

Miguel H.
4.0 out of 5 stars is wonderful.
Reviewed in the United States on December 1, 2014
Verified Purchase
Merril Garbus at a much more experimental stage of her music career. It's as if you can see tune-yards before it took form. The closing track, Fiyah, is wonderful.
Read more
Helpful
Comment Report abuse

Becky D
5.0 out of 5 stars Buy this album!
Reviewed in the United States on February 1, 2010
Verified Purchase
This is one of the most interesting albums I've heard in a long time. The songs are a wonderful mix of African and Latin influenced jazzy/rock often with undertones of slinky Portishead-sounding beats. And the lyrics are sometimes haunting, sometimes funny, and mostly very catchy. Overall, I love how this album takes from different forms of music to form something very new and very creative.
Read more
4 people found this helpful
Helpful
Comment Report abuse

Amazon Customer
4.0 out of 5 stars BiRd-BrAiNs rocks
Reviewed in the United States on August 27, 2012
Verified Purchase
This cd is awesome. I love tUnE-yArDs, and this cd by them is great. You'd be a bird brain not to get it.
Read more
One person found this helpful
Helpful
Comment Report abuse

Chad Moser
3.0 out of 5 stars Kind of a Letdown
Reviewed in the United States on January 18, 2010
Verified Purchase
I had the misfortune to see Merrill Garbus live first. She opened for The Dirty Projectors and her vocals killed. I bought this album in the hopes of capturing her voice for my listening pleasure. What I got in return was a seemingly minimalist, under produced album. Merrill comes of muted and distant, and the full power of her voice is not displayed on this album. I don't know if the production values represent a personal aesthetic or just a lack of funding, but I would recommend you throw your money down for Merrill live than this recording. This is a sad representation of her vocal range.
Read more
4 people found this helpful
Helpful
Comment Report abuse

Thomas M. Truscio Jr
4.0 out of 5 stars Four Stars
Reviewed in the United States on June 27, 2015
Verified Purchase
Weird but I own it now and track it occasionally
Read more
Helpful
Comment Report abuse
See all reviews from the United States

Gannon
4.0 out of 5 stars Style And Substance (7.5/10)
Reviewed in the United Kingdom on December 24, 2009
Verified Purchase
There is a fine line between oddball eccentrics and the plain annoying. Those that get it wrong are either lampooned for years or forgotten about instantly. Those that get it right earn a special place in cult record collections and favourable mentions in trendier-than-thou locations and become cyclical, periodically getting rediscovered and pawed over afresh. This is true of the mythical Daniel Johnston and true of Iceland's Mugison and his 2004 album  Mugimama, Is This Monkey Music?  And it probably ought to be true of one of 2009's most original albums  Jewellery  by Micachu & The Shapes.

When Micachu (née Mica Levi) wasn't writing for the London Philharmonic and performing at the Royal Festival Hall she was producing Jewellery, a real kitchen sink of an album that employs the vacuum cleaner, clapping beats and general squeaks `n' pops. Her madcap lo-fi caused a small ripple that may yet reach shore, the same shore that tUnE-yArDs' Merrill Garbus now inhabits. BiRd-BrAiNs equally treads the line and happily, for the most part, falls on the right side of it.

Her approach is similarly lo-fi, unsurprising for an entirely self-produced record. What is surprising is the real presence of melody that Garbus has woven into an album on which haphazard indulgence would perhaps have been more expected. The stark drum machine patterns jitter and her digitally affected vocal warms. BiRd-BrAiNs approaches the amiable peculiarities and harmonies of Dirty Projectors, particularly on the discordant yet rhythmic "Hatari", but concedes as ever on production values.

Spoken samples chatter on varied themes such as blueberries, guitars chime and slow-time, wonky, fuzzy beats build the slightest of glitchtronica overtones. It may all seem a little alien to begin with but makes more and more sense with exposure. In particular, the limping rhythms in "Lions" become hugely appealing with time. The pulsing drums and driving lo-fi guitar of "Jamaican" seem spot on for showcasing Garbus's manic whisper.

tUnE-yArDs may well be keen on stylising but behind the posturing lies real substance. Be it all carefully composed or blissful accident, BiRd-BrAiNs is really rather intelligent.

Tony T
5.0 out of 5 stars Rough, Original and Brilliant
Reviewed in the United Kingdom on February 20, 2013
Verified Purchase
Blew my head off when I first heard it. The album starts and you think, where the hell is this going? Then the bass kicks in and 'Sunlight' takes off. Yes, O Yes! All of it the work of one Merrill Garbus, the homemade recording is pretty rough (apparently it was all recorded on a dictation machine!), full of playful big booming beats and I could start listing all the wonderful tracks but that would be pretty much every track on it. The outstandingly outstanding moments? Pretty much every track on it. Get it now and then get the follow up Whokill. Now!
Read more
Helpful
Sending feedback...
Thank you for your feedback.
Sorry, we failed to record your vote. Please try again
Report abuse

Filomena
5.0 out of 5 stars Five Stars
Reviewed in the United Kingdom on October 28, 2015
Verified Purchase
all good
Read more
Helpful
Sending feedback...
Thank you for your feedback.
Sorry, we failed to record your vote. Please try again
Report abuse

Pearl
4.0 out of 5 stars Low Fi, lovely and erratic
Reviewed in the United Kingdom on June 21, 2011
Verified Purchase
Not all of my friends have liked this album. I personally think it's beautiful. Warm, hazy and often odd. Love it.
Read more
Helpful
Sending feedback...
Thank you for your feedback.
Sorry, we failed to record your vote. Please try again
Report abuse

M. Turner
5.0 out of 5 stars Quirky and Exciting
Reviewed in the United Kingdom on January 25, 2010
Verified Purchase
It's a great thing when you come across music that excites you on so many levels. This is one of the most original, enticing and enjoyable albums that I've heard for a while. There are many tracks that stand out on first listen, and plenty more that grow on you. A beautiful record.
Read more
Helpful
Sending feedback...
Thank you for your feedback.
Sorry, we failed to record your vote. Please try again
Report abuse