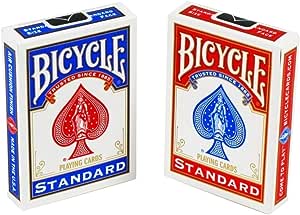 Visit the Bicycle Store
4.8 out of 5 stars 1,450 ratings
| 15 answered questions
Available at a lower price from other sellers that may not offer free Prime shipping.

4.8 out of 5 stars
4.8 out of 5
1,450 global ratings
How are ratings calculated?
To calculate the overall star rating and percentage breakdown by star, we don’t use a simple average. Instead, our system considers things like how recent a review is and if the reviewer bought the item on Amazon. It also analyzes reviews to verify trustworthiness.

Noam Garfinkel
3.0 out of 5 stars Spoiler alert... I STILL lost at go fish
Reviewed in the United States on September 23, 2018
Verified Purchase
Ok. My friend came over and we were gonna play go fish and I was really excited because I had watched some youtube strategy videos and was looking forward to using my new skills (youtube is the BEST when it comes to learning new skills. Especially card games. ) I was SURE I was going to kick his ass, but I'm not gonna lie, this guy is good (I'm pretty sure he's the guy that uploaded all the skills videos, I know a pair of hands when I see them ;) but seriously. And then I was like, "Jared, did you make a bunch of youtube videos for go fish strategy"? and HE said. "no." Yeah right). I also know a liar when I see one, kinda like my hand noticing thing. So, he wanted to use his deck, but I just got this fresh bicycle set off of amazon so I pulled rank on that argument. I'll admit, his deck was pretty dope, a harry potter set, but I get really triggered by Dumbledore (To be clear, i don't DISLIKE Dumbledore. He's amazing. It just makes me sad because... well you know... and if you don't I don't want to spoil it, but he dies.) So anyways, we're in the thick of it, asking for cards left and right. I was like "Jared, do you have any sixes?" I was nice about it, of course. Hostility doesn't get you far in competitions ;). Then he said "no". But I needed sixes. Bad times. But thats life. Long story short, I ended up losing that round. (I was going for sixes...i should have known). GET THIS. after, and ONLY after, jared won that round he casually mentioned to me that my deck (the red one) was missing the six of hearts. I dont even know where to start. First of all, how in the world did he know that?? He MUST be the youtube guy I just know it! I would NEVER notice - even if it was a joker missing!! At first I thought he was pulling a Dumbledore on me. But then I realized that it was for real, the six of hearts was missing. I'VE BEEN A LOYAL CUSTOMER OF BOTH BIYCLE CARDS AND AMAZON FOR ALMOST THREE MONTHS. Am I upset that I lost? Yes. Am I upset that I misplaced my trust in full, complete decks of cards? Yes. Am I upset that Dumbledore is dead? Yes, and, spoiler alert. He's dead. I hope you did not read that part about him dying. Especially if you are a harry potter fan and also didn't know that Dumbledore is dead. Thats why I said spoiler alert. It's so sad. I would not buy this deck of bicycle cards, especially if you plan on playing someone as talented as Jared at go fish. So anyways, you get it. three stars. But the blue pack was immaculate. Pretty much the best deck of cards ive ever laid my hands on. Three stars.

Chris Dahn
1.0 out of 5 stars So disappointed, not the same Bicycle cards I grew up with👎
Reviewed in the United States on May 3, 2020
Verified Purchase
So disappointed! I grew up playing w/Bicycle brand cards for years! Always loved the quality, weight, texture and material. Our home was destroyed by toxic mold and I missed my cards so my husband splurged and specifically ordered this brand. Material is thin & feels like some type of plastic or something with a weird material with a tiny cross hatched pattern to them, I'm assuming in an attempt to make them slippery but it doesn't help. They are way more slippery than old decks, even brand new, used to be. Hard to even shuffle them. So, unfortunately, like many other companies, Bicycle has followed suit (pun intended) and opted for cheaper materials. Makes me sad, especially when much of the reason people play with"real" cards is for the feel & texture of them in their hands. I get it, cheaper materials=making more money. Just unfortunate, especially with some where "the feel" matters so much. I'm disappointed Bicycle!
Read more
5 people found this helpful
Helpful
Comment Report abuse

Katherine M.
1.0 out of 5 stars DO NOT BUY - NOT REAL BICYCLE CARDS
Reviewed in the United States on August 2, 2020
Verified Purchase
Awful awful awful. Complete knock-offs from bicycle.
Wish I would have trusted more of the reviews I saw or asked where they are manufactured because I’m pretty sure it’s from China when Bicycle cards are made in the US. (The sad part is that they are coming off like these are the real things. Just some company copying the exact design.)
I ended up buying cause I felt they were a good price for two but I now understand why. The worst part is THEY DONT TAKE RETURNS, of course!
You can really tell how awful they are when you shuffle the cards, nothing like the original.
Read more
4 people found this helpful
Helpful
Comment Report abuse

LindaO
5.0 out of 5 stars LOVE THEIR DURABILITY
Reviewed in the United States on February 19, 2020
Verified Purchase
My young grandson & I play "War" a lot, and it's more fun with a double deck. I love the fact that the cards are coated, & can be wiped off if soiled. Also, don't have to worry about bent corners!
Read more
4 people found this helpful
Helpful
Comment Report abuse

Shelley L. Morris
2.0 out of 5 stars Expensive
Reviewed in the United States on March 26, 2020
Verified Purchase
I got to thinking after I bought them, there is no way I would pay what I paid for 2 decks of regular playing cards in a store. Guess I was bored and not thinking when I ordered them.
Read more
4 people found this helpful
Helpful
Comment Report abuse

Kirk Downing
5.0 out of 5 stars These Are The Cards You Want
Reviewed in the United States on July 26, 2020
Verified Purchase
Beyond just playing poker, my friends and I like to “flick” playing cards at targets and try to make them stick. Doing so requires a professional-quality playing card. These cards are exactly that. If you want cards that are the right thickness, won’t accidentally bend, and are easy to shuffle and deal, then these are the cards you want.
Read more
One person found this helpful
Helpful
Comment Report abuse

Josie
5.0 out of 5 stars Great Quality
Reviewed in the United States on May 14, 2020
Verified Purchase
Great quality and it came the first out of a bunch of prime orders. The cards were wrapped nicely and came with first class shipping!
Read more
4 people found this helpful
Helpful
Comment Report abuse

The Truth Is Out There 11
3.0 out of 5 stars Too slippery to use
Reviewed in the United States on July 11, 2020
Verified Purchase
These are nice quality cards, in the sense that they are thick and sturdy, however they are far to slippery to use. Anytime you try to play a game, the cards go sliding everywhere, making the game impossible.
Read more
Helpful
Comment Report abuse
See all reviews

forgotten
5.0 out of 5 stars Can't get better ...
Reviewed in the United Kingdom on June 14, 2019
Verified Purchase
Bicycle cards are always excellent quality and the ones to have. Add that to fast delivery and who can say more
Read more
One person found this helpful
Report abuse

HD Family
5.0 out of 5 stars Very good for tricks
Reviewed in the United Kingdom on February 5, 2020
Verified Purchase
Great cards for both playing and tricks, both thin, with enough grip to handle, but not too much you can’t do tricks
Read more
Report abuse

Oliver Packer
4.0 out of 5 stars Handling and design of the cards.
Reviewed in the United Kingdom on August 28, 2020
Verified Purchase
The design of the items and packaging was well designed and easy to read and the handling is good in the hand.
Read more
Report abuse

Page 1 of 1 Start overPage 1 of 1
This shopping feature will continue to load items when the Enter key is pressed. In order to navigate out of this carousel please use your heading shortcut key to navigate to the next or previous heading.
Back
Next
Pages with related products. See and discover other items: card games for two, card games, bicycle supplies, Best Rated in Standard Playing Card Decks, cards with fish, go fish deck