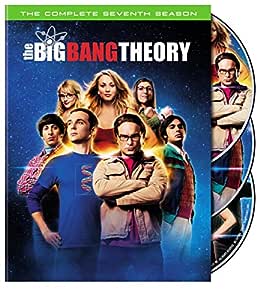 Secure transaction
Your transaction is secure
We work hard to protect your security and privacy. Our payment security system encrypts your information during transmission. We don’t share your credit card details with third-party sellers, and we don’t sell your information to others. Learn more
Details
Ships from
Amazon
Sold by
The Big Lebowski
The Big Bang Theory: Seas... has been added to your Cart

Save with Used - Good
$9.13
FREE delivery: Thursday, March 4 on orders over $25.00 shipped by Amazon.
Ships from: Amazon
Sold by: Prime Goods Outlet

4.9 out of 5 stars
4.9 out of 5
2,135 global ratings
How are ratings calculated?
To calculate the overall star rating and percentage breakdown by star, we don’t use a simple average. Instead, our system considers things like how recent a review is and if the reviewer bought the item on Amazon. It also analyzes reviews to verify trustworthiness.

DisneyDenizen
VINE VOICE
5.0 out of 5 stars Big Bang Theory Validated Geeks Everywhere
Reviewed in the United States on January 14, 2019
Verified Purchase
The Big Bang Theory is a sitcom about four nerdy thirtysomething scientists who work at CalTech. It stars Johnny Galecki, Darlene’s boyfriend from Roseanne. This was how the sitcom was originally described to me. So unappealing was the description that I didn’t watch it for a year. Once I finally did, I devoured it; it instantly became my favorite sitcom. The rest of America agreed. As time went by, more and more people discovered this show. In its final seasons, it was consistently the highest-rated sitcom in the country. There’s a good reason for that: this show is great!

The four scientists are:
- Supersmart theoretical physicist Sheldon, who is as advanced in physics as he is stunted in social skills. Many have speculated that Sheldon has Aspergers. The shows writers initially stated that they did not write Sheldon to have Aspergers. I don’t just think Sheldon has Aspergers - I think they all do. Sheldon is portrayed by Jim Parsons, who has rightfully won numerous Emmys for this role.
- Experimental physicist Leonard is Sheldon’s long-suffering roommate who pines for the neurotypical girl next door, waitress and wannabe actress Penny. Johnny Galecki's portrayal of Leonard is perfect. In general, all of the actors are well cast, and the ensemble cast really clicks.
- Astrophysicist Raj initially suffers from selective mutism; he cannot speak when a woman is present.
- Mama’s boy engineer Howard rounds out the group.

At its heart, this sitcom is about the development of these four young men, especially in regards to their relationships with women. The sitcom never just stays with its successful formula. Instead, it permits its characters to really develop. Relationships with women - some long, some short - come and go. Marriages take place. Forever unseen babies are born. It is a delight to see the characters make real progress in their lives.

One of the ways in which this sitcom really shines is in guest appearances. Wil Wheaton is a recurring favorite, as is Stephen Hawking. Guest stars are drawn from such shows as Star Trek, Battlestar Galactica, and Firefly. Bill Gates makes an appearance, as does Neil Gaiman. The guest star list is nerd nirvana.

My favorite aspect of the show is the constant references to the things geeks like, whether it’s TV shows or movies, video games or ComicCon. This show has validated an entire subculture. And, really, why shouldn’t it? Why should grown men be belittled for having paraphernalia from a favorite franchise while other grown men decorate their man caves in sports paraphernalia? Why is one socially acceptable and the other not? Well, thanks to The Big Bang Theory, no more.

12 years. Not a single weak season. Sure, there was an occasional weak episode. But this show could have gone on forever and never gotten old.

(The one weak spot is the Leonard-Penny relationship. These two have literally nothing in common, and it shows. In the end, the best the writers could do was envelop them in insult humor. That’s not to say that one of these brainiac boys could not have had a successful relationship with an intellectually-inferior attractive blonde. It’s just that this particular relationship clearly does not work.)

JD
5.0 out of 5 stars Lightning in a Bottle
Reviewed in the United States on January 8, 2015
Verified Purchase
This show is so dang funny! While I feel it has lost some of the magic it had in its first season, it has taken on a new dimension of character development that is awesome to watch. As each character grows and new characters are introduced, the show evolves, just like we do in life. All of the actors are tremendous, and their chemistry is that "lightning in a bottle" combination they talk about in show business. Add this to the writing, and you've got me laughing more than I have since Friends. In Season 7, the characters I have come to care about so much continue in their antics, their drama, their... dare I say it...sarcasm and I can watch these episodes again and again. Some of the lines have become jokes in our family. "Oh, gravity, you are a heartless b****." And I have to admit, when Sheldon finally has his moment with Amy, I felt my stomach flip inside and my breath catch, like you do when you really feel something real. Now that's saying something! If you are already a fan, you won't be disappointed. If you haven't seen this yet, what in the world are you waiting for? Grab yourself some lightning and pull up a chair!
Read more
One person found this helpful
Helpful
Report abuse

Jeremy Dinsmore
5.0 out of 5 stars Continues to excel over previous seasons!
Reviewed in the United States on March 23, 2015
Verified Purchase
I have been a fan of The Big Bang Theory for a while now. I'm enjoying the development within and between the characters, and the jokes continue to strike home with me, being a bit of a geek myself. The "May the 4th (Star Wars Day)" episode was excellent, although a little sad in spots.
This particular season was full of huge moments for most of the gang (don't worry, no spoilers here). There's follow-up from Raj's big revelation at the end of season seven. Sheldon was ripped forcibly from his comfort zone repeatedly, and eventually decides to make a big move because of it. The last few episodes, while funny, put tears in my eyes several times and proved that this comedy series has believable enough characters that I can sympathize with them and root for them. I can't wait for season eight -- so much is up in the air, and I want to see where everyone lands! And if we'll ever see Howard's mom (call it morbid curiosity on my part).
Read more
One person found this helpful
Helpful
Report abuse

Terry Hawes
4.0 out of 5 stars Continuing to give us great TV!
Reviewed in the United States on January 2, 2016
Verified Purchase
The laughs continue in Season 7 of the Big Bang Theory as Leonard and Penny get engaged (again) and Amy continues to be frustrated by the lack of intimacy she has with Sheldon. This changes somewhat in an episode where the couple are aboard a train and one thing leads to another and the two share a kiss.

Memorable episodes include a scavenger hunt that Raj puts on for the gang and the Thanksgiving episode where it is discovered that Penny accidentally married her ex-boyfriend, Zack, in Las Vegas, and Leonard works quickly to get it annulled. The characters continue to grow and change, change so much according to Sheldon that he needs to leave for a while to figure things out and this is the subject of the finale.

It was a good season and though the dynamics have changed considerably from seasons 1-3, the show is still one of the best on television.
Read more
Helpful
Report abuse

E. Sloane
5.0 out of 5 stars The Best Show on TV
Reviewed in the United States on September 20, 2014
Verified Purchase
Once again this series proves to have the best actors and writers in TV. The cast continues to grow intotheir characters, and the laughs are non-stop. It will be a sad day when this series comes to an end. This is not one of those fly by night, here today gone tomorrow, comedies. It is founded in solid roots with a suburb cast. Sheldon is....well Sheldon (as always), but Amy, Raj, Penny, Lenard, Howard and Bernadette continue to expand their characters. It will be interesting to see if Sheldon has learned anything when he returns this year from his trek (check out the last episode). If you have never seen this series, start from the beginning. You will not be disappointed. It has the staying power of I Love Lucy, Mash, and other great comedies that we have loved. Don't let this pass you by.
Read more
One person found this helpful
Helpful
Report abuse

Jean Hunter
1.0 out of 5 stars Freezing during play
Reviewed in the United States on September 26, 2020
Verified Purchase
This is the second time I am buying season 7. From 2 different sources. Both have issues with one episode freezing and not playing. Seems to be a manufacturer issue? Not worth buying any more seasons if I cannot complete the set. Don't waste your money Season 7 does not play well.
Read more
Helpful
Report abuse
See all reviews

Stacy
5.0 out of 5 stars Such a great Show
Reviewed in Canada on August 23, 2017
Verified Purchase
Overall,I'm very happy with it. Very pleased with the product. Received product in timely fashion. Product is just as described in details. Works great, showed up on time. All around good experience with product and seller. I couldn't find another product that with a better quality. Also, I like its price, cheap. quality and efficiency are very good appearance.
Read more
Report abuse

Misha
4.0 out of 5 stars it is the show you know and enjoy
Reviewed in Canada on September 18, 2015
Verified Purchase
print " Are you The Big Bang Theory Fan?"
fan = raw_input(">")
If (fan =="yes"):
print " you are looking at this season, then you are already familiar with the show & characters. Get It!"
else:
print " why are you looking at this item? "

Rainbow So
5.0 out of 5 stars Love this show!!
Reviewed in Canada on October 23, 2014
Verified Purchase
Great BBT season!!!
this is a great buy for anyone that has been following the Big Bang Theory show or Just starting. There's tons of special feature on all 3 disc that I enjoyed watching.
It's one of those timeless DVDs that I know I'll go back to every now and then on a rainy day just to brighten up my mood.
Read more
3 people found this helpful
Report abuse

Dana Carter
5.0 out of 5 stars Careful with shipping
Reviewed in Canada on March 14, 2020
Verified Purchase
It did arrive broken inside. The dvds were secured but the piece that holds them in the case properly was stretched out and not working. Dvds were functioning.
Read more
Report abuse

satisfied customer
5.0 out of 5 stars great show
Reviewed in Canada on October 11, 2014
Verified Purchase
this is a great show even if you can see it on the TV it is nice to have the original dvd's of each season because it is a show that is funny and made for adults at a good price and a fast delivery you can not go wrong and yes i will buy the next season next year in the fall

Page 1 of 1 Start overPage 1 of 1
Previous page
Next page
Pages with related products. See and discover other items: korean dvd's