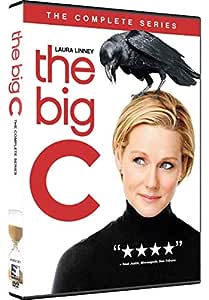 Laura Linney stars in her Golden Globe®-winning role as Cathy Jamison, a 42-year-old schoolteacher who has always played by the rules. That is, until she receives a life-changing diagnosis. But instead of giving up, Cathy decides to live it up! Nothing and no one is safe, including her self-absorbed family, her cantankerous neighbor, and her smart-ass students. Brutally honest, unapologetically funny and perfectly profound, The Big C is a surprisingly different comedy that reminds us that life is always worth living on our own terms.
"Linney is a coolly intelligent actress with a leveling gaze and a beautifully controlled voice that can coddle or crush." - Tom Gliatto, People Magazine
Starring: Laura Linney (Netflix's Ozark), Oliver Platt (NBC's Chicago Med), Gabriel Basso (Super 8), John Benjamin Hickey (CBS's The Good Wife), Gabourey Sibide (Precious)

4.8 out of 5 stars
4.8 out of 5
39 customer ratings
How does Amazon calculate star ratings?
Amazon calculates a product’s star ratings based on a machine learned model instead of a raw data average. The model takes into account factors including the age of a rating, whether the ratings are from verified purchasers, and factors that establish reviewer trustworthiness.
Top Reviews

Jyd
5.0 out of 5 stars Great Show
Reviewed in the United States on June 2, 2020
Verified Purchase
I missed seeing the last season but after waiting a long time, it doesn't appear to be coming to streaming any time soon, so I bought the DVD set. Fantastic show all around. Acting, writing, production, are all first class. DVDs are fine. Nice and clear. Glad the show is available. I highly recommend it.
Read more
Helpful
Comment Report abuse

Benni Bas
5.0 out of 5 stars Great show!
Reviewed in the United States on June 17, 2019
Verified Purchase
How a woman handles cancer and chemo. Not maudlin, yet funny.
Read more
Helpful
Comment Report abuse

J. Shrader
4.0 out of 5 stars Pretty good
Reviewed in the United States on February 11, 2020
Verified Purchase
A couple of the scenes hit close to home, but entertaining.
Read more
Helpful
Comment Report abuse

Johnny
5.0 out of 5 stars Definitely makes you appreciate life.
Reviewed in the United States on February 1, 2020
Verified Purchase
Love this show from start to finish. Does not drag on, always funny. Well acted and written
Read more
Helpful
Comment Report abuse

MarcFusion Dot Com
5.0 out of 5 stars Smart, Hilarious Show with Excellent Cast & Writing
Reviewed in the United States on May 14, 2019
The Big C is a terrific show, the kind of series that grabs your attention right from the first episode and never relents, the coveted “just one more episode” type entertainment. The core narrative is one we’ve seen before, someone coping with a terminal diagnosis, but this series has a fresh approach and while it steers into a darker style of humor, The Big C also manages to feel authentic, even when it goes a little off the deep end. So yes, things get dramatic and spiral into chaos at times, but these moments are earned and well developed, so they come off as natural, given the characters involved. This is especially true of some of the threads with Cathy and her brother Sean, which prove to be some of the wilder, darker content, not to mention some of the funniest. And while the premise is centered on Cathy’s cancer diagnosis, the show is driven by comedy and while that involves a good deal of darker humor, it anchors it all with some effective emotional depth. The time is taken to build these characters and make the emotional beats resonate, while a shorter four season run ensures the story never feels stretched thin.

The four season duration also helps The Big C maintain a consistent level of quality, so unlike many shows out there, the series doesn’t taper off or run out of steam, giving us four rock solid seasons of entertainment. One of the main reasons the show works so well is that while cancer is a prominent presence in the narrative, the story is about Cathy, not so much her illness. Laura Linney is given some excellent material to work with and she really makes the most of the character’s potential, turning in a fantastic, memorable effort. She is able to use the well crafted writing to mold Cathy into a believable, authentic character, which makes her emotional moments, wild decisions, and even mundane situations more impactful. Linney is the heart and soul of the show and her performance is magical at times, she carries the series and that is a real compliment, given how strong this ensemble is. The cast also includes Cynthia Nixon, Oliver Platt, Alan Alda, John Benjamin Hickey, Idris Elba, Reid Scott, Hugh Dancy, and Susan Sarandon. Visit my site for a full review!

Mark Sullivan
5.0 out of 5 stars A Masterpiece!!!
Reviewed in the United States on May 12, 2019
I can't say enough about this series. It's all about running your own life and not letting The Big C control it. Amazing story lines make this show fresh and enjoyable. A must see for anyone.
Read more
Helpful
Comment Report abuse
See all reviews from the United States

laurie l
5.0 out of 5 stars Just buy it!
Reviewed in Canada on July 13, 2019
Verified Purchase
Absolutely awesome.. Laura Linney is a class act! Writer's did a graet job balancing every emotion that goes with cancer, all with a touch of humour. My only disappointment is she never got her pool!
Read more
Helpful
Sending feedback...
Thank you for your feedback.
Sorry, we failed to record your vote. Please try again
Report abuse