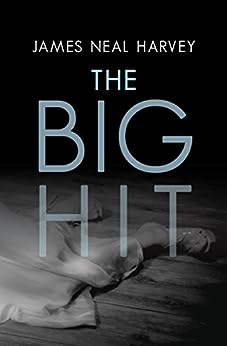 by James Neal Harvey (Author) Format: Kindle Edition
See all formats and editions
Sorry, there was a problem loading this page. Try again.
In Harvey’s first new thriller in more than fifteen years, a starlet’s murder draws an NYPD detective into a cross-country manhunt

Mongo wakes up, brushes his teeth, and prepares to kill a movie star. He needs a wig and a phony press pass, as well as a very special tape recorder that holds two fléchettes, one of which is earmarked for screen siren Catherine Delure. A bit of smooth talk takes Mongo past Delure’s security and into her hotel room, where he completes his assignment with ease. The hit was simple, he thinks. But it is about to go terribly wrong.

Delure appears to have been shot during a robbery, but homicide detective Jeb Barker is not fooled. Tracking the self-assured assassin leads the PI first to Las Vegas, then to California—where blue sky and palm trees cannot distract him from the darkness within the hit man’s heart.
Read more
Previous page
Next page

“Pounding pace . . . [A] chilling and memorable thriller.” —Publishers Weekly on By Reason of Insanity

“A grand whopper of a thriller . . . The author works in a pared-down, pulsating style and introduces nicely timed humor.” —Booklist, starred review

James Neal Harvey spent fifteen years in the advertising business before selling his company and devoting himself to writing. He made his hardcover debut in 1990 with By Reason of Insanity, which introduced NYPD detective Ben Tolliver.

Harvey followed Tolliver through four more novels, including Painted Ladies, Mental Case, and Dead Game. In 2011, Harvey published Sharks of the Air, a history of the development of the first jet fighter, and in 2014, he returned to thrillers with The Big Hit.

4.2 out of 5 stars
4.2 out of 5
21 global ratings
How are ratings calculated?
To calculate the overall star rating and percentage breakdown by star, we don’t use a simple average. Instead, our system considers things like how recent a review is and if the reviewer bought the item on Amazon. It also analyzes reviews to verify trustworthiness.
Top reviews

Billz
VINE VOICE
3.0 out of 5 stars Good Story Teller with Absurd Stereotypes
Reviewed in the United States on June 21, 2015
Vine Customer Review of Free Product( What's this? )
By and large I enjoyed this book, and as long as you can put up with some of the more banal stereotypes and borrowed imagery I think you will too. The bad guy is a character named "Mongo" and for the life of me, I could not disassociate him from the bad cowboy of the same name who slugged his horse in Mel Brooks' "Blazing Saddles." That aside, Mongo is a shrewd and efficient killer, and the story starts with his murdering a movie star, one Catherine Delure, and her manager. Very creative in that the reader knows the how the murder occurs, and we follow the NYPD detective as he tries to unravel the mystery first in New York City (where the murder takes place) and then in Los Angeles -- in Hollywood and Malibu. The investigation pits NYPD detective Jeb Barker against both the killer and the NYPD bureaucracy. Naturally, Jeb is a mustang (who drives...yes...a Ford Mustang) and even though he is an effective detective, he's always running afoul of the bureaucracy and shooting people who are really, really bad — like a puppy-kicking, parks-in-the-handicap-zone, child molester.

As Jeb moves through the investigation, he encounters Ms. Delure's housekeeper who refers to her late employer as "Miz Delure" sounding not unlike Hattie McDaniel who played "Mammy" in "Gone with the Wind"-- however, the housekeeper has an Eastern European name; imagine a crazed Cloris Leachman playing "Mammy," and you'll see the clashing images that wracked my mind. Later, the author introduces a butler whose name is "Cedric" — that's about as close to "Jeeves" as you can get! Finally, the hero, Jeb Barker, tells the reader that he doesn't like "rap" music and the clothes the rappers wear--pants falling off and jangling medallions. He likes "country" music. Ok, we get it. The author, James Neal Harvey, is an old white guy. All the hero had to say was that he liked country music, and it is assumed that he doesn't like rap, hip hop and the genre of music favored by the young. (Back in the day, we were assured that listening to Elvis and Little Richard would doom our wretched souls to the deepest corners of hell.) Likewise, had the hero liked rap, we would assume that he did not favor country. Way to go Harvey! Add to the great American divide.

These dumb and lazy stereotypes of the politically correct rednecks aside, The Big Hit is an exciting read, and Harvey is a skilled storyteller. However, it's like having a wonderfully clean and ironed shirt and then smearing mustard all over it for no good reason at all.

TJ McCarthy
4.0 out of 5 stars More Like a Medium Hit
Reviewed in the United States on December 2, 2014
Vine Customer Review of Free Product( What's this? )
A hit man – and as he’ll be the first to tell you, he’s very, very good – takes out a sexy Hollywood starlet in her ritzy New York hotel room, and makes it look like a robbery. The NYPD bite hard on the robbery angle, and get nowhere fast trying to find the killer. Except for Det. Jeb Barker, who is convinced the starlet was killed for something other than her jewelry. Although something of a pariah, he convinces his Lt. to send him to Los Angeles to track down some leads, and quickly gets more action than he bargained for.

If you like fast-moving stories and don’t mind some rough edges, this could be the book for you. The killer, Mongo, is both smart and efficient, but seems more like a B-movie villain than a cold-blooded assassin. Jeb could have stepped straight out of a ‘70s or ‘80s police drama, and the other characters probably wandered over from central casting. And the “surprise” love interest is pure cliché. But the pacing is dead on, never dragging nor becoming too frantic, and the writing is clever. There aren’t a lot of plot twists, but it’s cool to watch as the motive is slowly revealed. And, something you don’t always get in modern thrillers, in the NYC scenes you get the feel and colour of New York, and the same for LA. You couldn’t just change the names of the cities without changing all the background detail that goes with them. Which makes the story both more absorbing and more realistic.

I was torn between whether to give this 3- or 4-stars, but went with 4 because it really was a fun read. Just set your expectations accordingly, and then enjoy.
Read more
Helpful
Report abuse

Trudie Barreras
TOP 1000 REVIEWERVINE VOICE
4.0 out of 5 stars Plenty of mayhem, but not unnecessarily gory
Reviewed in the United States on July 5, 2014
Vine Customer Review of Free Product( What's this? )
Harvey's "The Big Hit" is a very enjoyable read. Although there is plenty of mayhem, the author doesn't dwell on the gorier aspects. Likewise, he avoids crude language and although there is a love interest, there is no sexual violence or unnecessarily explicit eroticism. The main female character, Dana, is well-drawn and believable, and there are a couple of female police officers who have cameo parts that add interest and balance. The story is NOT complimentary to the "upper echelons" of either the NYPD or the LAPD, but I suspect that it is true to life with the political exigencies that beset big-city police departments with respect to the pressure to "clear" high-profile cases.

There are a couple of distressing loose ends, like a failure to mention the discovery of the remains of the security guard that Mongo stuffed into the roof vent; of course, that was just a sideline, but since it didn't further the plot in any way, it left me wondering why that incident had to happen at all. Collateral damage that is relevant to the story is morally acceptable to me, but that which is not is a bit distressing. In any event, though, the narrative is at times quite tongue-in-cheek, and makes it quite clear that the "facts" as reported by the news media in ALL high-profile cases will be "spun" to provide maximum titillation and obfuscation. All in all, a fun book.
Read more
One person found this helpful
Helpful
Report abuse
See all reviews