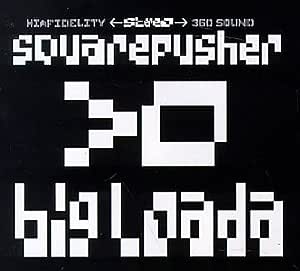 1. Come On My Selector

4.1 out of 5 stars
4.1 out of 5
23 customer ratings
How does Amazon calculate star ratings?
Amazon calculates a product’s star ratings based on a machine learned model instead of a raw data average. The model takes into account factors including the age of a rating, whether the ratings are from verified purchasers, and factors that establish reviewer trustworthiness.
Top Reviews

JQuark
5.0 out of 5 stars Never been disappointed
Reviewed in the United States on August 15, 2013
Verified Purchase
Squarepusher is the ultimate in intense electronica. The music is always super-engaging and fun. I was a bit skittish seeing that it was an earlier release, but soon after listening I was glad to have brought it into my collection.
Read more
Helpful
Comment Report abuse

JLS
5.0 out of 5 stars A truly unique album
Reviewed in the United States on July 21, 2002
This is one of those albums that you can listen to and be enthralled by the joyous melodies and destroyed by the insanity of the percussion. Squarepusher seems to be able to do that to his listeners on almost all of his albums. Squarepusher's Tom Jenkinson has a way with his albums, you can tell everyone of his albums is actually by him, yet at the same time, every album has their own unique style about them. This album seems to take the synths from standardized rave music and orchestrate them better with a bit of funk bass and supersonic drums. Somehow Jenkinson makes the drill n' bass technique seem easy and is able to form the ultimate catchiness out of the hyperkenitic styles that run together.
If you like your mind to be drilled and challenged with ever changing music that keeps a consistency about it, you will probalby enjoy this album. For many people, however, it will simply be too much. It is almost like a jock bragging about a military obstacle course being a peice of cake and becoming winded over the first wall. Big Loada' might look easy to tackle from the outside, but once you run the gambit, only the people that holds the most sanity (or insanity??) survives.

Adam S
5.0 out of 5 stars One of the 'Pusher's finest
Reviewed in the United States on June 7, 2007
When I listen to this album, I get speeding tickets.

When I listen to this album, I get asked to slow down, to stop running. I get told that if I keep up my pace, I'm gonna collapse.

This album is simply the most frenetic, insane thing I have ever heard in my life; it's that simple. Things start out with "Journey to Reedham", which features an Amen break so chopped up it's nigh-on impossible to recognize; and it only gets crazier from there. Not a single track drops below 180 BPM; "Selector" is probably the 'Pusher's most insane song to date; like I quote from the song, "I'm the *censored* daddy!"

This was my entry into the insane world of Tom Jenkinson's wild dril'n'bass; highly recommended for anyone getting into it. If possible, get the 1998 Nothing records re-issue (which compiles this, Port Rhombus, and 2 tracks from 1997's Vic acid); you will NOT be dissapointed!

Stephen Atkins
5.0 out of 5 stars Brilliantly crafted Intelligent Dance Music
Reviewed in the United States on December 18, 2003
Tom Jenkinson, like many of his labelmates, makes music that show us that electronic music doesn't always mean a consistent thump of bass over slowly changing harmonics. Tom Jenkinson's music is truly engaging in every sense of the word. It makes the listener actively absorb every facet and subtle element of the dense complexity of the music. Although, it is not to be said that listening to his work is arduous or exhausting, it merely allows for a deeper and more complete appreciation. Squarepusher is not for everybody, as is common in progressive music. Jenkinson creates thickly layered beats, rhythms and harmonies.
When one listen's to Jenkinson's beats it can conjure up the image of a hundred-armed jazz drummer. Much of it's influence is derived from that genre. Squarepusher's drill-and-bass take on that style of drumming is, although occasionally confusing, nothing short of brilliant. His ear for rhythm and the tweaking and manipulation of it is amazing.
On "Big Loada" Squarepusher somewhat departs from his often jazz-heavy music. There is a much more synthetic, mathematical feel. "Journey to Reedham (7 AM Mix)", one of the album's best tracks, is also unlike much of his previous efforts. This is so in the sense that it is much more happy and up-beat than even the more optimistic tracks on previous albums. The song conjures up the exact image it's title implies, one of being half-awake, on a road-trip, driving into the rising sun as it leaves the horizon.
"Come on my Selecter", another amazing track on the album is break-neck to say the least. This track moves like an amphetamine-soaked hummingbird. Meant, I am supposing, for club-goers who enjoy contorting their bodies and flailing their limbs at a million miles per hour. This track is a prime example of, like Aphex Twin's "Come to Daddy", Jenkinson's devious and ironic tweaking of more mainstream musical genres. This one being the club-friendly electronica that warp artist are often the antithesis of.
"Big Loada" is a woderfully orchestated masterpiece of drill-and-bass. Squarepusher is one of those artists that goes largely unappreciated but is, although below the radar, reshaping electronic music as we know it.

kieran
4.0 out of 5 stars A bit soft!
Reviewed in the United Kingdom on August 19, 2016
Verified Purchase
A bit disapointed with this cd,heard come on my selector and thought all the tracks would be similiar but most of it is quite abstract and mellow,still a good album but not what i was expecting!
Read more
Helpful
Sending feedback...
Thank you for your feedback.
Sorry, we failed to record your vote. Please try again
Report abuse