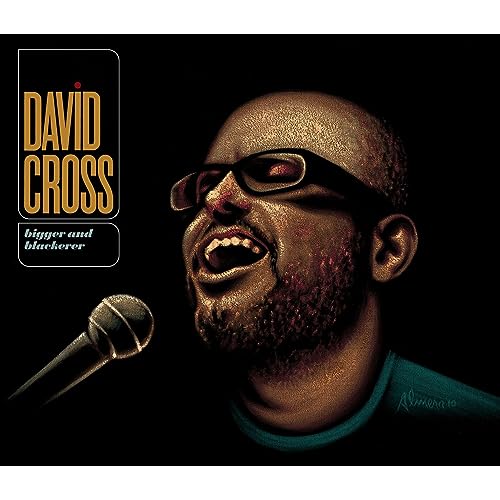 3.7 out of 5 stars
3.7 out of 5
15 global ratings
How are ratings calculated?
To calculate the overall star rating and percentage breakdown by star, we don’t use a simple average. Instead, our system considers things like how recent a review is and if the reviewer bought the item on Amazon. It also analyzes reviews to verify trustworthiness.
Top reviews

Timothy Fulmer
4.0 out of 5 stars Tight!
Reviewed in the United States on February 1, 2011
Verified Purchase
As much as I love rambling angry David, this album is well layed out, (opening number even! that's classey) the usualy offensive jokes abound but this album flows and I'm constantly entertained. This one is going into my road trip playlist.

And if you miss rambling angry comedy I suggest you tuck into a collection of Bill Hicks, classic.
Read more
2 people found this helpful
Helpful
Report abuse

Robby R.
5.0 out of 5 stars "You might do something you regret...or worse!"
Reviewed in the United States on June 10, 2010
Verified Purchase
This is the comedy album I have been waiting for. And by that I mean the one I've been waiting for since Obama took office. Now, before anyone jumps to conclusions about my feelings or David Cross's, let me just say he doesn't even come out very strongly against the president. And he doesn't have to, personally I am just tired of a few of my favorite comedians buying in to (or seeming to anyways) this idea that some great renaissance of government policy is going to take place, so it's nice to hear that at least David Cross didn't buy in to it either (or, doesn't seem to). Now, to go along with my opening statement, I will say this: this is also the comedy album I have been waiting for on a completely goofy level as well, all of his religion bashing aside (it's a Cross album, you know what you're getting into here, people).

I admit I was a little reserved when it came to being hopeful about this album. Since 2004, the only thing I'd heard David Cross on was the compilation album Comedy Death Ray, where he talks about his dog for the better part of 10 minutes (In fairness, also making fun of himself as he often does by prefacing it with "I never thought I'd be the type of person, let alone comedian...to talk about my dog...but...I recently got a dog...and I've made some hilarious observations!"). So I was a little afraid that after so many years inactive and having been in a serious relationship, his material was going to veer into a more "mature" direction (aka talking a lot about being in a relationship and the CRAZY differences between men and women). There are mentions of both his girlfriend and his dog, but they are fairly quick. And I also have to point out that when this happens in a comedians life, it's not necessarily a bad thing. But for me, being just 22, the comedy that appeals to me right now is the goofy, sometimes raunchy, politically incorrect political and religious stupidity bashing.

Compared even to It's Not Funny, this album is a step down in regards to how fired up and angry he can get when ranting about religion and politics (and anyone who has listened to Shut Up You F***ing Baby! knows how abrasive and caustic he can be), but it works, and I prefer it. Because let's face it, most people see that it doesn't really matter who holds the power, they are usually ineffective. Now again, Amazon reviews are not the place for political commentary, I only say this in regards to Cross's material on this album, in which his being more reserved underscores how his feelings on and about politics has evolved over the past decade or so.

So on to the sillies! This album is shorter than the previous two (SUYFB! was almost an hour and a half!), but again, for once I don't think he was drunk when recording this album, and it seems much more polished and less "I'm gonna get wasted and wing it." If you are a general fan of David Cross, and especially if you enjoy his comedy, you need to hear this album. It's a brilliantly executed performance, and his anti-heckles have really never been sharper.
Read more
8 people found this helpful
Helpful
Report abuse

R. Roberts
3.0 out of 5 stars Funny if you can hear it. I agree it needs volume leveling bad.
Reviewed in the United States on June 19, 2010
Verified Purchase
Although this is not as non-stop hilarious as Shut Up You F... Baby (but what could possibly be that funny), this album is very funny like anything David Cross does. That is, if you can hear it. Much like another reviewer says, this album in general is recorded at a very low level and the volume fluctuates so much you can hardly hear it in certain parts. Then, if you crank it up so you can hear the very quiet parts, the loud parts are ridiculously loud. Normaly I listen to CDs with the volume on 28 and I had to crank it to 39 on this one. It is almost detrimental to the entire experience. Some of this has to do with the way David Cross talks, but this is way worse than his previous albums.

The first time I listened to this I was listening on my laptop's internal speakers which don't go up very loud and there were parts that I couldn't hear even when putting my ear damn near to the speaker. It didn't come across as super funny at first, but when I listened to it later on some bigger speakers and I could actually hear what Cross was saying, my opinion changed immediately.

It keeps changing, but my favorite line right now is "Dear Coors (whimper), I can't get beer in me." Although this album is not as specifically politically/religiously geared as his first album, I don't think the shift to some more direct comedy is detrimental as some other reviewers made it out to be. David Cross could almost read a dictionary and be hilarious.

Would be a 4 or 5 star if the volume issue was fixed. Worth getting.
Read more
2 people found this helpful
Helpful
Report abuse

KungFu Pirate Pants
5.0 out of 5 stars David Cross is made of magic and unicorns
Reviewed in the United States on May 29, 2010
Verified Purchase
I stumbled across this masterpiece whilst searching Amazon for unreleased Christopher Cross songs. I know there's some crazy jazz fusion tracks he did with Peter Cetera. (I digress, but the thought of Peter Cetera and Christopher Cross caught in a Scat battle still thrills me.)

So I bought this without even previewing the tracks. The opening track made me think I might be in to something more "arty" than expected. The Loveboat style invocation did stir my soul, but where was that angelic mellow rock I had expected from Christopher Cross? Well I'm a moron; this is David Cross! (I'm not to good with these new fangled Atari's) Well, I hope the two Mister Cross's are cousins, because David Cross is the Christopher Cross of humor! If there were any Scat battles for one to marvel, it was with David Cross and my funny bone!
Read more
4 people found this helpful
Helpful
Report abuse

David Alterman
4.0 out of 5 stars Fan enjoys David Cross album.
Reviewed in the United States on September 10, 2010
Verified Purchase
David Cross can be abrasive and obnoxious but that is what I like about him. He takes risks and pushes the envelope.
It helps that he is a very funny comedian with a wonderful command of the language.
Some parts fall flat, and there is the Yakov Smirnov joke, otherwise a successful effort.
Read more
3 people found this helpful
Helpful
Report abuse
See all reviews