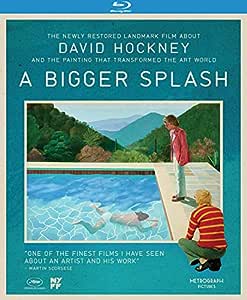 A Bigger Splash is an intimate and innovative film about English-born, California-based artist David Hockney and his work, honoring its subject through creative risk-taking. Director Jack Hazan creates an improvisatory narrative-nonfiction hybrid featuring Hockney, a wary participant, as well as his circle of friends, capturing the agonized end of the lingering affair between Hockney
and his muse, an American named Peter Schlesinger. The result is at once a time capsule of hedonistic gay life in the 1970s, an honest-yet-tender depiction of gay male romance that dispenses with the then-current narratives of self-hatred and self-pity, an invaluable view of art
history in action, and a record of artistic creation that is itself a work of art.

2.7 out of 5 stars
2.7 out of 5
73 customer ratings
How does Amazon calculate star ratings?
Amazon calculates a product’s star ratings based on a machine learned model instead of a raw data average. The model takes into account factors including the age of a rating, whether the ratings are from verified purchasers, and factors that establish reviewer trustworthiness.
Top reviews

Amazon Customer
5.0 out of 5 stars Five Stars
Reviewed in the United States on July 8, 2018
Verified Purchase
A documentary of a great painter during a great era of history.
Read more
One person found this helpful
Helpful
Comment Report abuse

Bill Michael
5.0 out of 5 stars I liked it.
Reviewed in the United States on September 3, 2006
Verified Purchase
It is not true that the film made a horrible transfer to DVD. The quality is wonderful, especially for a film that was made in the 70's. In fact, I'd say it was a labor of love for whomever processed the original prints. This is a film about David Hockney so there's no chase scene. I can only speculate that since he is an artist, and artists are a little different from the rest of us, this film is a little different from what you might expect. I think Peter Schlesinger is very pretty and I would like to have gotten to know him better but the film never peers into his personality, and I think that is intentional. I find David Hockney much more attractive in that he is warm, funny, artfully clever, and human. Whether you buy it or rent it, I think you'll get something out of it if you want to know something about David Hockney.
Read more
14 people found this helpful
Helpful
Comment Report abuse

WMD55
1.0 out of 5 stars Plunk of an Acorn--No Splash
Reviewed in the United States on March 1, 2015
Verified Purchase
I can’t imagine a drearier, more self-indulgent movie. Hockney is in it, but the meandering, narrative-free style tells you little about anything. Lots of mumbling, poor lighting, and what’s the point? Too bad, because his pool paintings are light and wonderfully enigmatic.
Read more
One person found this helpful
Helpful
Comment Report abuse

Jeffery T Boutte
1.0 out of 5 stars What is it supposed to be....?
Reviewed in the United States on October 25, 2015
Verified Purchase
If you are going to make a documentary, there should be dialogue. If you are going to make a movie/documentary/biography there still has to be dialogue. I find there are no clearly defined lines as to what this video is supposed to be about. It can't make up its mind? A Clockwork Orange is a good example of surrealistic video Art. Videodrome had dialogue and a plot, albeit psychological science fiction. Fahrenheit 451 at least made an attempt at a plot and had dialogue which came to a believable climax. What is the main character of this video supposed to be evoking from the audience? If I want to view "Ho Hum" occurrences in the life of some boring individual's life, I can find that on Facebooks or some other social forum.
Read more
4 people found this helpful
Helpful
Comment Report abuse

Amazon Customer
1.0 out of 5 stars A turtle could easily outpace this
Reviewed in the United States on March 21, 2016
Verified Purchase
If you're looking for something to put you to sleep, this is your film. A turtle could easily outpace this. It tries to be an artsy film about film and fails. If you're looking for entertainment, look elsewhere.
Read more
Helpful
Comment Report abuse

evrhandyman
1.0 out of 5 stars One Star
Reviewed in the United States on October 7, 2015
Verified Purchase
Boring movie, couldn't wait for it to end. Not worth watching.
Read more
2 people found this helpful
Helpful
Comment Report abuse
See all reviews from the United States

Rob
5.0 out of 5 stars Complete and pristine quality at last!
Reviewed in the United Kingdom on April 23, 2012
Verified Purchase
This film meant a good deal to me long before I even saw it. I was too young to get into a cinema to see it when released in the mid 70s, but I read everything about it I could and remember standing agape at a huge poster advertising A Bigger Splash in a London tube station. I loved (and love) Hockney's paintings and the fact there was a mini-scandal over a gay sex scene in the movie, which got it banned in some places only made it more desirable to see it!

Since then I have seen a poor grainy video version of the film, partly cut, and even more heavily cut when it was on Channel 4. Originally an X certificate adults only film, it is now merely a 15! I'm not a film buff but the transfer on this DVD/Blue-ray set seems to be very good indeed, colours conveyed beautifully and how well lit and presented are Hockney's paintings!

This is a fictionalised documentary about the artist and his friends ... in the same way as modern shows like The Only Way is Essex. And what friends they are, the designers Celia Birtwell and her late husband Ossie Clark (murdered in the 90s) feature here, as well as Hockney's former partner, the photographer Peter Schlesinger and other beautiful young men - only identified by their first names. The story told concentrates on Hockney's state of mind after the break up of the relationship, and how this effects his ability to paint. It begins in 1973 and flashes back to 1971, then gradually bringing the story forward. Hockney's dependance on his friends is touching, especially to the intriguing Celia. There is a great deal of full-frontal male nudity in this film, including that of Hockney himself in one shower scene. The gay sex scene is of Peter Schlesinger with an unknown guy, and is certainly longer, grittier and more explicity erotic than anything in Brokeback Mountain! At the time, this shocked cinema goers.

I found the film mesmerising, but it does suffer from some longeurs and the narrative can be vague in places because of the way the director Jack Hazan made the film. Fortunately there are some brilliant extras included in this release, especially the detailed interview with Hazan himself. Recommended.

sue sue
5.0 out of 5 stars A bigger splash
Reviewed in the United Kingdom on April 17, 2012
Verified Purchase
This video of David Hockey and friends is totally voyeur heaven. Best quote 'Celia won't come to New York because the women are too frumpy '. Then there are views of David Hockney working and struggling to get the images of his paintings exactly right. There is an additional film which show David Hockney producing an etching which is wonderful. It was very enlightening about how many processes go into making one apparent simple print. There was also good section on Ozzie Clark's fashion show. There is also a section of boys swimming in the pool for the famous paintings. Iloved this film. If you enjoyed this also watch Bill Cunningham in New York
Read more
5 people found this helpful
Helpful
Sending feedback...
Thank you for your feedback.
Sorry, we failed to record your vote. Please try again
Report abuse

Ton NL
5.0 out of 5 stars Super
Reviewed in the United Kingdom on May 5, 2018
Verified Purchase
Super
Read more
Helpful
Sending feedback...
Thank you for your feedback.
Sorry, we failed to record your vote. Please try again
Report abuse

Giselle
5.0 out of 5 stars Fascinating portrait of an artist
Reviewed in the United Kingdom on August 11, 2012
Verified Purchase
Almost 40 years after the film was made it remains an insightful window into David Hockney's hedonistic lifestyle in the 1970's in London and California. A beautiful slow moving film built around conversations with friends and lovers and the creation of his swimming pool pictures. I loved it.
Read more
One person found this helpful
Helpful
Sending feedback...
Thank you for your feedback.
Sorry, we failed to record your vote. Please try again
Report abuse
Load more international reviews

waals,w.h.
3.0 out of 5 stars Three Stars
Reviewed in the United Kingdom on May 12, 2016
Verified Purchase
A good dvd
Read more
Helpful
Sending feedback...
Thank you for your feedback.
Sorry, we failed to record your vote. Please try again
Report abuse

Maverick
1.0 out of 5 stars Utter, utter, utter.... yawn
Reviewed in the United Kingdom on August 24, 2006
Verified Purchase
My friend had to check if I had gone into a coma after this clap-trap had finished. I'm not sure I wasn't abducted by aliens - so surreal and utterly pointless was this film.

Who were the central characters? Where was the story? How long can a camera focus on two guys having dinner whilst a naked youth is plastered to their french windows watching them.

I'm not sure this film was directed so much as just happened.

Truly awful - it gives hope for the worst talent in film-making to come. Almost worth buying to truly appreciate how appalling 'art' can be...

B. Searle
1.0 out of 5 stars I wish I had waited for reviews before pre-ordering
Reviewed in the United Kingdom on February 10, 2012
Verified Purchase
If you think this is about art forget it. Its all about Homosexuality.Parts disgusted me which made me fast wind blatant homo sex and naked men scenes,and looking and talking about young men....What utter trash.
Read more
6 people found this helpful
Helpful
Sending feedback...
Thank you for your feedback.
Sorry, we failed to record your vote. Please try again
Report abuse