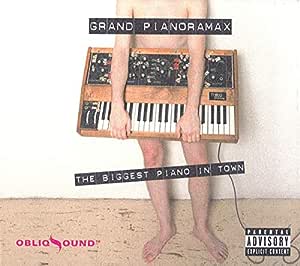 The Biggest Piano in Town

The evolution of Grand Pianoramax continues with Leo Tardin's sophomore release The Biggest Piano In Town on ObliqSound. On this followup to the group's self-titled debut album from 2005, the latest disc blends phuture funk, spoken word, hip-hop and the music of one of the most creative pianists on the scene today.

"Grand Pianoramax may be the future of funk." -- Dallas Observer

"Tardin, like colleagues Jason Moran, Matthew Shipp and Vijay Iyer, belongs to the small circle of those jazz pianists who look passionately and intelligently for new ways to reanimate jazz through the infusion of modern grooves." -- Berliner Zeitung (DE)

4.5 out of 5 stars
4.5 out of 5
2 customer ratings
How does Amazon calculate star ratings?
Amazon calculates a product’s star ratings based on a machine learned model instead of a raw data average. The model takes into account factors including the age of a rating, whether the ratings are from verified purchasers, and factors that establish reviewer trustworthiness.
Top reviews

DJ Outro
3.0 out of 5 stars Jazzy Pseudo-electronica with Mediocre Spoken Word Poetry
Reviewed in the United States on September 21, 2008
It takes some gumption to go by the name of Grand Pianoramax (the artist's real name is Leo Tardin) but this guy's sound is all about big bold statements. His instrument of choice is a beefed up electric keyboard (see the album cover) and is accompanied only by drums and occasionally spoken word voice-overs and hip-hop stylings. It's almost like an electronic album at times, but he breaks into improvisational modes with a Medeski Martin & Wood type of feel to remind us that he's still closer to the modern jazz tradition than the electronic. These make for the best tracks on the album, in my opinion, especially Ride I: The Race (tk 2) and The Tempest (tk 9). The needlessly weird spoken word poetry on the hyped single "The Hook" detracts from the otherwise interesting beat. A mixed bag.
Read more
4 people found this helpful
Helpful
Comment Report abuse
See all reviews from the United States