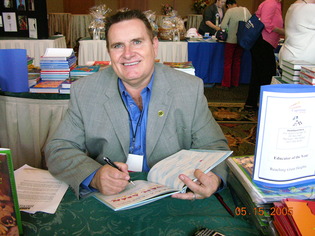 Starred Review. Grade 2–5—This grand and varied anthology contains an impressive number of old favorites and newer selections. Grouped by theme, such as animals, nature, feelings, school, family, and nonsense, the poems represent an appealing range of humor, pathos, and meditative wonder. Though many of the offerings have been widely anthologized, it's always nice to come across classics by Robert Louis Stevenson, Christina Rossetti, Eleanor Farjeon, and Emily Dickinson. Their poems, along with newer works by Mary Ann Hoberman, Dennis Lee, and Aileen Fisher, among others, are paired with illustrations crafted by an eclectic range of distinguished children's picture-book artists including Ashley Bryan, Lois Ehlert, the Dillons, Chris Raschka, Steven Kellogg, and Dan Yaccarino. There is a smattering of poems by Robert Frost, and tributes to Bill Martin, Jr., from Eric Carle and Steven Kellogg. Five of Martin's poems are included as well. The nine poems in the food chapter represent a savory mix of whimsy and laugh-out-loud humor, including Louis Phillips's "On Eating Porridge Made of Peas," John Ciardi's "Mummy Slept Late and Daddy Fixed Breakfast," and Jack Prelutsky's "Herbert Glerbett." This finely crafted, accessible collection should resonate with a wide audience of readers; it deserves a place in most schools and libraries.—Marilyn Taniguchi, Beverly Hills Public Library, CA
Copyright © Reed Business Information, a division of Reed Elsevier Inc. All rights reserved.

The almost 200 selections in this big handsome anthology, created by Martin Jr. and published posthumously with Sampson’s help, have a singing beat that will turn even young kids on to what Steven Kellogg calls the “music of language.” The collection brings together poems from Robert Frost, Christina Rossetti, Langston Hughes, Nikki Grimes, Aliki, Jack Prelutsky, and many other well-known poets. Accompanying the poems are pictures from many of the best picture-book illustrators, whose work, often in the artists’ signature styles, extends the words' lyrical rhythms and playfulness. The pages are spaciously designed and organized into thematic sections, such as animals, people and places, school, nonsense, family, and feelings, closing with a big final group of Mother Goose rhymes. This is a great gift book as well as a strong library and classroom anthology for browsing and reading aloud. Adults, in particular, will enjoy Eric Carle’s moving introduction. Preschool-Grade 3. --Hazel Rochman

Bill Martin, Jr. (1916–2004) has been called “America’s favorite children’s author.” He wrote more than 300 books for children, including the classic texts Brown Bear, Brown Bear, What Do You See?, illustrated by Eric Carle; and Chicka Chicka Boom Boom, illustrated by Lois Ehlert.

Michael Sampson is a New York Times bestselling author of twenty-two books for young children, including Chicka Chicka 1, 2, 3 and The Bill Martin Jr Big Book of Poetry. He and Bill Martin Jr wrote many popular books together, including Panda Bear, Panda Bear, What Do You See? and Baby Bear, Baby Bear, What Do You See? Michael Sampson lives in Flagstaff, Arizona.

Eric Carle is an internationally bestselling and award-winning author and illustrator of more than seventy books for very young children, including The Tiny Seed, Papa, Please Get the Moon for Me, and his most well-known title, The Very Hungry Caterpillar. Born in Syracuse, New York, Eric Carle moved to Germany with his parents when he was six years old. He studied at the prestigious art school, the Akademie der Bildenden Künste, in Stuttgart, before returning to the United States, where he worked as a graphic designer for The New York Times and later as art director for an advertising agency. The Very Hungry Caterpillar, now considered a modern classic, has sold nearly fifty million copies and has been translated into sixty-five languages. With his late wife, Barbara, Eric Carle cofounded The Eric Carle Museum of Picture Book Art in Amherst, Massachusetts in 2002. Eric Carle lives in the Florida Keys.

Steven Kellogg is the beloved illustrator of more than one hundred books for children including Clorinda and Clorinda Takes Flight, and he has been awarded the Regina Medal for his entire body of work. Mr. Kellogg works in an old barn overlooking Lake Champlain in Essex, New York, where he lives with his family.

Page 1 of 1 Start overPage 1 of 1
This shopping feature will continue to load items when the Enter key is pressed. In order to navigate out of this carousel please use your heading shortcut key to navigate to the next or previous heading.
Back
Next
Pages with related products. See and discover other items: discount books, poems for children, poetry book, children poetry, childrens books for preschool, 2018 Best Childrens' Books