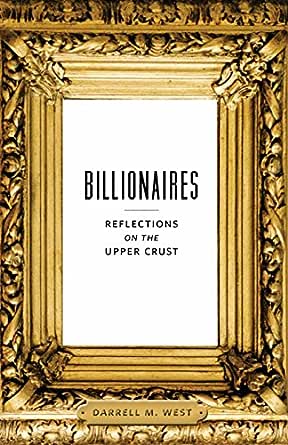 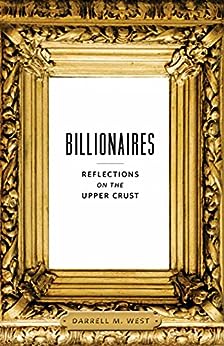 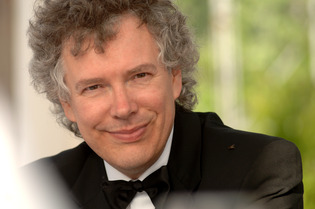 Darrell West is vice president and director of Governance Studies at Brookings, where he is the founding director of the Center for Technology Innovation. His previous books include Digital Schools: How Technology Can Transform Education and Brain Gain: Rethinking U.S. Immigration Policy. --This text refers to the paperback edition.

"F. Scott Fitzgerald taught us that the very rich are different from the rest of us. Now Darrell West has taken us on a thoughtful romp through the world of our new billionaire class. At a moment when we have read both glorifications and denunciations of those with unimaginably large fortunes, West has set out to understand and explain who they are and what they do. He couples a moral concern for the cost of rising inequality with a scholar's commitment to telling the story straight. This is both an important book and a good read."
—E.J. Dionne, Georgetown University

"As a free-market conservative who hopes to see more money invested in politics, not less, I disagree with many of Darrell West's attitudes and arguments. His book BILLIONAIRES is nonetheless a fresh, thought-provoking, clear-eyed view of a bitterly controversial subject, demonstrating that that the prominent participation of plutocrats in politics is a worldwide, and not just American, phenomenon. Even those who reject West's conclusions will enjoy the crisp, readable, and passionately personal style he deploys to make his points."
—Michael Medved, nationally syndicated talk radio host

"In the United States and across the world, billionaires are front and center in politics -- running for office, bankrolling campaigns and lobbies, pushing policy messages. With a riveting mix of facts and stories, Darrell West tells us who these new plutocrats are, what they think about politics, and how they manuever to get what they want. West faces the tough ethical issues, too, and asks whether watchdogs can still bark at billionaires operating in secret. BILLIONAIRES is a must read for all who care about the future of democracy."
—Theda Skocpol, Harvard University

"The saddest sight in American politics is a U.S. Senator begging a billionaire for his crumbs."
—Chris Matthews, MSNBC's Hardball

"'Are the super-wealthy different from you and me?' asks Darrell West. Different or not, they are shaping our world, sometimes for the better (when they invent new things), but often for the worse, when they undermine democracy, use government to enrich themselves, and create a culture of social separatism and uber-success. Unless you are indifferent to this new world, you should read West’s book."
—Branko Milanovic, author of The Haves and the Have-Nots: A Brief and Idiosyncratic History of Global Inequality

3.4 out of 5 stars
3.4 out of 5
11 customer ratings
How does Amazon calculate star ratings?
Amazon calculates a product’s star ratings based on a machine learned model instead of a raw data average. The model takes into account factors including the age of a rating, whether the ratings are from verified purchasers, and factors that establish reviewer trustworthiness.
Top Reviews

Mark Rhodes
3.0 out of 5 stars Informative and thought provoking
Reviewed in the United States on November 12, 2014
Verified Purchase
This book is packed with information about billionaires, including their political and philanthropic activities. The author discusses the data in some detail, including his analysis of many of the impacts of increasing wealth inequality and his recommendations to mitigate some of the negative impacts to democratic processes. Thoughtful consideration is given to both the positive and negative impacts of billionaires and the economic inequalities they represent. A thoughtful and well written treatise of an important aspect of our current economic situation.
Read more
One person found this helpful
Helpful
Comment Report abuse

David P. Racine
2.0 out of 5 stars Too Thin!
Reviewed in the United States on October 30, 2015
Verified Purchase
I was hoping for a more in-depth examination of the role of extreme wealth in society. But the actual details of wealthy influence were sparse and seemed mainly to come from available news accounts. No original research here. Mostly, the book is a somewhat superficial argument for a set of policy proposals. They may be the right proposals; they just don't emerge naturally from the thin narrative.
Read more
One person found this helpful
Helpful
Comment Report abuse

Robert W. Melrose OD
2.0 out of 5 stars Not what it proclaims...
Reviewed in the United States on November 26, 2014
Verified Purchase
I bought this book to learn more about Billionaires and their impact on society. What I read was a diatribe on how we need to
have income equality and more government control of our economy.

Here is a snippet:

"Political scientist Benjamin Radcliff, at the University of Notre Dame, goes even further. In his book "The Political Economy of Human Happiness, he argues that personal well-being is served by fair minded policies. Drawing on cross-national surveys , he finds that people "live more positive and rewarding lives in countries (and states)that have bigger governments, large welfare states, stronger labor movements, and more economic regulation (controlling for other factors)."

This is more of a book about the political process in the united states and a push for socialism.

Gobble up this book if these are your beliefs but save your money if they are not.
Read more
8 people found this helpful
Helpful
Comment Report abuse

Paul Tognetti
4.0 out of 5 stars The increasing influence of billionaires in the political process is cause for concern.
Reviewed in the United States on October 17, 2014
"I suggest that wealth flows from a combination of individual initiative, long-term vision, hard work, good timing, educational opportunities, social networking, and government assistance. Wealth creation is often affected by societal trends, public policy, tax rates, and social welfare programs. In other words, so-called "self-made men--and women--receive a lot of help along the way." -- page 145-146

In a campaign speech in July 2012 President Barack Obama raised more than a few eyebrows when he opined that "If you've got a business--you didn't build that. Somebody else made that happen." I recall how the owner of the local bagel shop that I frequent, who rises each morning at 3:00 A.M. to make the bagels, bristled when she heard that remark. Perhaps the President was not referring so much to small businesses but rather to the super-rich who are exerting increasing influence in our nation these days. According to author Darrell M. West of the Brookings Institution, there are currently 492 billionaires residing in the United States. What are the priorities of these individuals? How much influence do they really peddle? And how do billionaires in this day and age differ from those in the past? West has researched the topic extensively and presents his findings in his new book "Billionaires: Reflections on the Upper Crust". It turns out to be a fascinating case study.

In the past, billionaires such as John D. Rockefeller devoted much of their time, energy and resources to traditional philanthropy. They donated liberally to universities, built hospitals and established libraries. Many invested heavily in foundations devoted to scientific research. But in recent years the landscape appears to have changed dramatically. The new breed of billionaire seems to be much more ideologically driven. For example, West reports that Peter Lewis has spent some $40-60 billion over the past two decades supporting the decriminalization and legalization of marijuana. Opponents such as law enforcement and religious organizations simply cannot muster the funds needed to combat such a well-heeled campaign. Meanwhile, the infamous Koch brothers are equally aggressive in advocating for any number of conservative causes. Clearly, big money interests are a very real threat to the very foundations of our democracy. Darrell West offers a number of additional examples from both sides of the political spectrum. In Part III of the book "What Can Be Done?", West offers a number interesting suggestions on how some of these issues might be mitigated in the future.

Overall, I found "Billionaires: Reflections on the Upper Crust" to be a thoughtful and fairly well written book. West makes no attempt to hide his liberal leanings but I thought he dealt with the issues at hand in a pretty even-handed way. Americans of all political persuasions should be concerned about the ability of this tiny group of individuals to influence the direction of our nation. Recommended.
Read more
5 people found this helpful
Helpful
Comment Report abuse
See all reviews from the United States