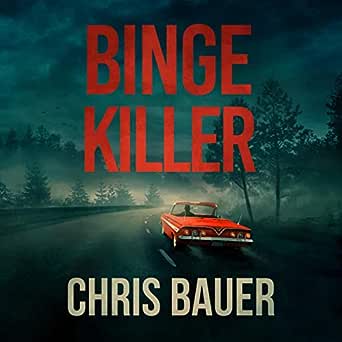 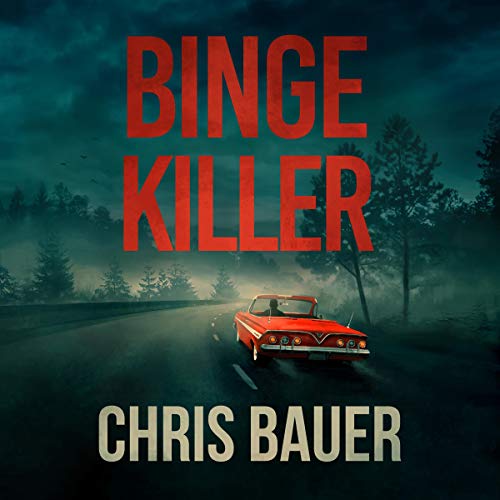 4.5 out of 5 stars
4.5 out of 5
31 customer ratings
How does Amazon calculate star ratings?
Amazon calculates a product’s star ratings based on a machine learned model instead of a raw data average. The model takes into account factors including the age of a rating, whether the ratings are from verified purchasers, and factors that establish reviewer trustworthiness.
Top reviews

Booklover
5.0 out of 5 stars A no holds barred thriller perfect for bingeing
Reviewed in the United States on October 9, 2019
Verified Purchase
Some characters show up at just the right time. Counsel Fungo, bounty hunter and retired state trooper, is just that character in “Binge Killer,” author Chris Bauer’s latest thriller. Bauer has given this reader a new hero in Counsel Fungo. So, move over boys, because there’s a new sheriff in town.

Bauer’s writing is crisp, at times bordering on lyrical, and shows no reservations. Which is good, because “Binge Killer” touches on topics not for the faint of heart. From Counsel’s struggle with Tourette’s Syndrome, through graphically depicted murders and rape scenes, this is a no-holds-barred ride. Bauer delves into the minds of the criminal element and law enforcement alike, giving the reader plenty to consider as we look out on the happenings in our own world. Indeed, Bauer’s writing finds a place to inhabit in the darkest, forgotten corners of the human mind.

“Binge Killer” is rounded out with memorable characters, witty and telling dialogue, and enough humor on the dark side to make the reader crack a smile even when all hell seems to be breaking loose. Because that’s exactly what happens as Bauer puts the reader in a position to question the fine line between right and wrong, justice and injustice.

This is the perfect binge read guaranteed to keep the blood pumping. Bauer has a winner here in Counsel Fungo, and I for one hope to see her and her canine deputies return.

J. A. Nash
5.0 out of 5 stars The opening chapter alone is worth the price of admission!
Reviewed in the United States on October 4, 2019
Verified Purchase
BINGE KILLER, the newest offering by Chris Bauer, is a darkly cunning crime story with a compelling mix of characters and plot twists, packaged artfully in a surprise ending.

Counsel Fungo, the protagonist in this story, is a female bounty hunter tasked with tracking Randall Burton, a sadistic serial killer who is not above killing and mutilating children. Counsel is more capable (and surely more strident) than most male sleuths generally encountered in the crime fiction genre. Counsel’s traumatic childhood, dramatic loss of her husband, and her affliction with the ever-erratic symptoms of Tourette syndrome elevate her empathy for crime victims. The reader is rooting for her throughout the tension-filled events.

The plot is fast-paced and gritty throughout. Enjoy the ride.

Buttons
3.0 out of 5 stars Ok book!
Reviewed in the United States on February 18, 2020
Verified Purchase
This book started off good, then got a little confusing, ending was good. Could have left out a lot of the language.
Read more
One person found this helpful
Helpful
Comment Report abuse

V Mannion
5.0 out of 5 stars Fascinating heroine
Reviewed in the United States on January 20, 2020
Verified Purchase
Gory and unexpected. If you don't like violence, not for you. But if a surprising heroine is your speed, this will keep you reading.
Read more
One person found this helpful
Helpful
Comment Report abuse

Gravity Challenged
4.0 out of 5 stars Who knew that Tourette's syndrome could be so funny?
Reviewed in the United States on October 3, 2019
I was provided an advanced reader copy to review this book and for my review. The review is my honest opinion and I frequently read for this group of writers and my reviews have ranged between two and four stars. If a book is bad I will say so. First, let me say that this book will not be everyone's cup of tea and if language and adult situations bother you then I advise you to pass on this book. Having said that, the main character is a retired female state trooper who now works as a bounty hunter. She also has Tourette's syndrome and the writer's use of her language and her thoughts provide for an interesting and entertaining backdrop to her character. While she is one of two main characters in the book there are several other characters that are well developed and are vital to the tale. The writing is excellent. The story line is engaging. I'm on my Kindle or iPad every day reading a book and this story captivated me and held my interest because of the story line but more so because of the characters. To me a five star book is a classic. So a four star review from me means that I found this book to be superb and out of the ordinary.
Read more
4 people found this helpful
Helpful
Comment Report abuse

Karen
4.0 out of 5 stars Suspenseful, edge-of-your seat thriller, but not for the faint of heart
Reviewed in the United States on October 7, 2019
This was my first Chris Bauer read, and I must say I was impressed with his writing skills. I was captivated by the storyline and the colorful characters, especially our heroine, Counsel, and her two service dogs. I liked her spunk and her never-give-up attitude, and I admired her fighting spirit in dealing with her Tourette’s. I will say that the only reason I gave this four stars instead of five was for the numerous F-bombs throughout the book and the over-the-top blood, gore, and graphic sexual situations, including rapes. I realize that cursing is one of the effects of Tourette’s, so I was able to overlook that, but the F-bombs were not limited to Counsel’s “episodes.” They were numerous enough by each and every character that it became a real distraction for me, and I began to wonder if even the dogs would start swearing as well! As far as the blood, gore, and graphic sexual situations, I understand when you’re writing about a serial killer with a depraved mind, you can expect some of that, and I am not typically faint-hearted, but like I said, for me it was over-the-top, and sadly, because of all of the aforementioned extremely distasteful things, I will not be looking to read any more from this author. I received a copy of this book from the author, and am grateful for the opportunity to sample his work. I have tried to provide an honest opinion, and I am clearly in the minority of all the reviewers, so I’m glad that this talented author has an audience. It just wasn’t my cup of tea.
Read more
One person found this helpful
Helpful
Comment Report abuse

Patty U
5.0 out of 5 stars WOW
Reviewed in the United States on October 1, 2019
I so hope this will be a series. I loved reading this book. There are several questions I had: how can a town have no crime in fifty years, how could Randall Burton kill for so long and no one noticed, how did Counsel handle twenty years with the deputy service while dealing with Tourette's? The author did a great job explaining everything as the book moved along. I really liked the touch of supernatural effects. There is a big twist at the end. Didn't see that coming.Counsel and her two companions, Tess and Fungo are bounty hunters and very good ones. This is the story of one of their hunts. Awesome!! Looking forward to more in this series(?).
Read more
2 people found this helpful
Helpful
Comment Report abuse
See all reviews from the United States