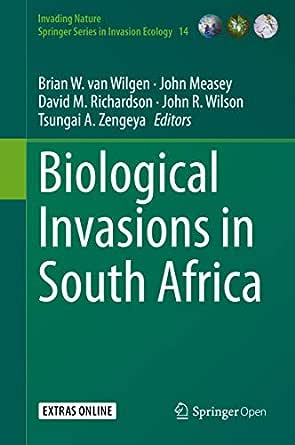 Flip to back Flip to front
Audible Sample Playing... Paused   You are listening to a sample of the Audible narration for this Kindle book.
Learn more
ISBN-13: 978-3030323936
ISBN-10: 3030323935
Why is ISBN important?
ISBN
This bar-code number lets you verify that you're getting exactly the right version or edition of a book. The 13-digit and 10-digit formats both work.

Brian W. van Wilgen is Emeritus Professor at the DST-NRF Centre of Excellence for Invasion Biology at Stellenbosch University, South Africa. His interests include applied ecology and the development of evidence-based approaches to conservation management in Africa and beyond. His work has focussed mainly on fire ecology and biological invasions, and he has published over 250 peer-reviewed journal papers and book chapters.

John Measey is Chief Researcher at the NRF-DST Centre of Excellence for Invasion Biology, based in the Department of Botany and Zoology at Stellenbosch University, South Africa. He is author/co-author of over 200 peer-reviewed journal papers and chapters in edited books. His research focuses on animal invasions, especially those of reptiles and amphibians.

David M. Richardson is Director of the DST-NRF Centre of Excellence for Invasion Biology and a Distinguished Professor of Ecology at Stellenbosch University, South Africa. His research focuses mainly on plant invasions, especially trees and shrubs. He is author/co-author of over 430 peer-reviewed journal papers and chapters in edited books. He has edited/co-edited six books, including Fifty years of invasion ecology (Wiley-Blackwell, 2011) and is co-author of Invasion Dynamics (Oxford University Press; 2017).

John R. Wilson is the science lead for the South African National Biodiversity Institute's Biological Invasions Directorate.  He is author/co-author of over 120 papers in peer-reviewed journals with a particular focus on invasion science, and was the lead author of a recent book on detecting and responding to alien plant incursions (Cambridge University Press; 2017).  He is a member of the IUCN's Invasive Species Specialist Group, and works across science, management, and policy (e.g. as a lead editor of South Africa's National Status Report on Biological Invasions, and current chair of the South African Alien Species Risk Analysis Review Panel).

Tsungai Zengeya is a senior researcher in the Biological Invasions Directorate at the South African National Biodiversity Institute and leads up the team producing the South African National Status Report on Biological Invasions. His research interests are in aquatic ecology, with a focus on understanding the impacts of, and managing and preventing biological invasions. His is also a core team member of the DST-NRF Centre of Excellence for Invasion Biology at University of Pretoria, South Africa.

This open access volume presents a comprehensive account of all aspects of biological invasions in South Africa, where research has been conducted over more than three decades, and where bold initiatives have been implemented in attempts to control invasions and to reduce their ecological, economic and social effects. It covers a broad range of themes, including history, policy development and implementation, the status of invasions of animals and plants in terrestrial, marine and freshwater environments, the development of a robust ecological theory around biological invasions, the effectiveness of management interventions, and scenarios for the future. The South African situation stands out because of the remarkable diversity of the country, and the wide range of problems encountered in its varied ecosystems, which has resulted in a disproportionate investment into both research and management. The South African experience holds many lessons for other parts of the world, and this book should be of immense value to researchers, students, managers, and policy-makers who deal with biological invasions and ecosystem management and conservation in most other regions. --This text refers to the hardcover edition.