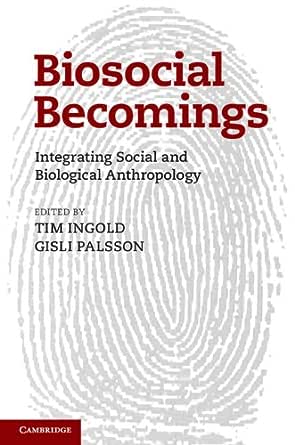 Flip to back Flip to front
Audible Sample Playing... Paused   You are listening to a sample of the Audible narration for this Kindle book.
Learn more
ISBN-13: 978-1107025639
ISBN-10: 110702563X
Why is ISBN important?
ISBN
This bar-code number lets you verify that you're getting exactly the right version or edition of a book. The 13-digit and 10-digit formats both work.

"In this ambitious and highly original volume, Ingold and Palsson try to lead anthropology toward a fundamental rethinking of the static dichotomy of biology and culture. Challenging the assumptions of nineteenth-century biology, which are often still taken as axiomatic - that human skin is a boundary between the autonomous natural world of the organism and the exogenous cultural and ecological setting in which the human being is embedded - the contributors invite you to blur those categorical distinctions with modern data and theory. Instead they present humans as "becomings" - as parts of continually unfolding biosocial relationships with other humans, and other species. To a scientist who is trying to comprehend a bipedal, linguistic creature that nevertheless takes several years before it can even move and communicate properly, this makes a good deal of sense. It is a challenge to deeply rooted modes of scientific thought, and an intellectually very rewarding work."
Jonathan Marks, University of North Carolina, Charlotte

"Biosocial Becomings is a thought-provoking collection of essays on the current re-negotiation of the boundaries between the biological and the social in the study of humans. The subtitle of the book promises a new integration of social and biological anthropology after a long century of divorce. It does more: It explores a conceptual space that is no longer dominated by the dichotomy between nature and culture."
Hans-Jörg Rheinberger, Max Planck Institute for the History of Science

"The essays included in the book are highly informative and inspiring. I am pleased that the authors actually build upon an interdisciplinary approach. The texts are based not only on findings and theories of social and biological anthropology, but the authors also benefit from various concepts of philosophy, psychology, and other scientific fields. Biosocial Becomings is a highly original volume including inspiriting texts. I personally find [it] groundbreaking, because it is really an effort to restore connection of social and biological anthropology."
Martin Soukup, Anthropos

"... an interesting and thought-provoking read for those of us ready to engage in debate with our colleagues in social anthropology."
Siân Waters, Primate Eye --This text refers to the hardcover edition.

Featuring contributions from leading anthropologists, this volume demonstrates how anthropology can move forward in tandem with discoveries in the biological sciences, reaching beyond the dualisms of nature and society and of biology and culture. The chapters combine wide-ranging theoretical argument with in-depth discussion of material from recent or ongoing field research. --This text refers to the hardcover edition.

Tim Ingold is Professor of Social Anthropology at the University of Aberdeen. His research is wide-ranging and interdisciplinary, spanning environment, technology and social organisation in the circumpolar North, evolutionary theory, human-animal relations, language and tool use, environmental perception and skilled practice. He has received numerous awards and distinctions, including the 2004 Anders Retzius Gold Medal of the Swedish Society for Anthropology and Geography.

Gisli Palsson is Professor of Anthropology at the University of Iceland, Reykjavik. He has conducted fieldwork in Iceland, the Republic of Cape Verde and the Canadian Arctic, and has written on a variety of issues including biomedicine, genomics, genetic history, human-animal relations, fishing, arctic exploration, environmental discourse and the history of slavery. --This text refers to the hardcover edition.
Read more