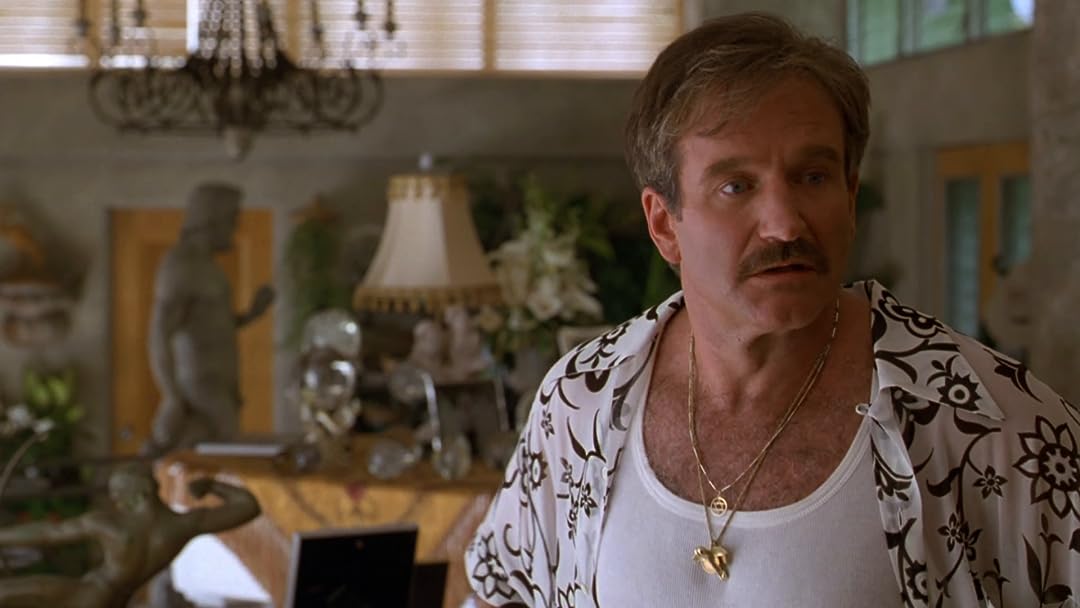 Zachary LittrellReviewed in the United States on November 25, 2018
4.0 out of 5 stars
I wish the dinner scene would last forever. Nathan Lane's a treasure
Verified purchase
Gene Hackman scrutinizing bowls with naked boys "playing leapfrog" is well worth the wait. The movie has fun with stereotypes and celebrates them, and makes sex jokes galore without descending into smutty (the most risque it gets is Robin Williams hiding a statue's privates, and Val grimacing at the houseman's thong).

I only have two real complaints: 1) Val is...kinda unlikable. He makes a pretty tall order asking his parents to literally hide their identities, and acts wounded when they don't immediately capitulate. I for one was happy when he disappeared to check something and left Nathan Lane alone to chew up scenery. And 2) Calista Flockhart is a very lovely woman. But it's insane they tried to pass her off as 18 (or Dan Futterman as 20), Why not modify the script to fit their ages?

(And I guess one more tiny complaint: Christine Baranski is criminally underused. She is a dynamite actress and barely appears in the film)

But those are minor complaints. This is absolutely Nathan Lane's show and he kills every scene he's in.

Richard RobinsReviewed in the United States on September 16, 2018
4.0 out of 5 stars
Drag Queens Everywhere
Verified purchase
This is a hilarious film (1996) directed by Mike Nichols. You need to put out of your mind "La Cage au Folles." Williams & Lane are at the top of their form.

The scene is set in South Beach Florida in high season. The sets and Armand's "drag club" are more elaborate than the predecessor. Rated R for an uncountable number of wigs, thongs, cross-dressers, twerking, and swishing. Gene Hackman deserves recognition as a straight RW Senator in a jam.
12 people found this helpful

Mary ReneeReviewed in the United States on March 27, 2019
5.0 out of 5 stars
Perfection
Verified purchase
I always forget how much I love this movie. Then when ever I catch it, it's absolute perfection. It's one of the movies like "Guess Who's Coming to Dinner" where we can look at it in hindsight and remember the exact era that it's coming from. Somehow it manages to be timeless while also being thoroughly a product of the time it was produced. I give a lot of the credit to the cast, which is simply amazing.
10 people found this helpful

CBReviewed in the United States on August 13, 2018
5.0 out of 5 stars
Best movie!
Verified purchase
This is one of my favorite movies of all time! It stands the test of time, and if anyone doesn't enjoy it, they must not enjoy a good time. The DVD has lasted MANY viewings so far!
13 people found this helpful

mark murrayReviewed in the United States on October 13, 2018
5.0 out of 5 stars
A classic timepiece
Verified purchase
What can I say, this movie was a classic! I loved the Birdcage and have seen it several times. I received it very fast from Amazon and the picture was clear and nice. The movie takes place in South Florida at a drag club with stellar performances from Nathan Lane and Hank Azaria. The supporting cast is excellent also. Robin is always funny in the comedies. I laughed so hard at the end at Gene Hackman. This is a must have for any Robin Williams fan. Dianne Wiest was great too. I wish I could have given this 10 stars.
8 people found this helpful

MaryJaneReviewed in the United States on January 5, 2019
1.0 out of 5 stars
Pretty sure it's bootleg
Verified purchase
5 star film in a ZERO star format. Really wanted this film - loved it for years and finally got it as a Christmas gift for myself. Returned as defective because I'm pretty sure this is a bootleg copy - and quality is glitchy. The MGM lion freezes in midroar! No menu. Automatically plays with subtitles. Not even any artwork on the dvd itself! Top and bottom are just the same - both shiny mirrored plastic.
6 people found this helpful

Robert HayesReviewed in the United States on September 13, 2014
4.0 out of 5 stars
Robin Williams and Nathan Lane make a great comic team in this remake of a classic French film
Verified purchase
THE FILM: Many years ago I watched LA CAGE AUX FOLLES, which this film is based on, and incidentally was one of the first foreign language films I ever saw. From what I remember, it was a laugh-riot from beginning to end, and was very economical at 96 minutes. THE BIRDCAGE, directed by Mike Nichols and starring Robin Williams, Nathan Lane and Gene Hackman, tells essentially the same story but with an American bent. While I can respect the changes that were made, at about 25 minutes longer things could have been more streamlined than they were. Here, Robin Williams plays a more subtle comedic character as Armand, the owner of the titular Birdcage, a drag club where his partner Albert (Nathan Lane) is the star performer. When his son Val comes home for a visit, he tells his father that he is getting married, but to the daughter of a conservative Senator. The comedy of errors that ensues has to be seen to be believed, and in my mind was as funny as the original. Robin Williams was very effective in playing the "straight" man to Nathan Lane's hysterical queen, and both played off of each other very well. Gene Hackman was also pretty hilarious as a stereotypically backwards-minded right-winger. Overall, while a remake of LA CAGE AUX FOLLES might not have been necessary, THE BIRDCAGE is pretty funny, if a little long-winded in parts. It has a great cast who all perform very well together, with special mention going to Hank Azaria as Armand and Albert's butler Agador. It also had a fine soundtrack as well. Bottom line: Robin Williams fans should enjoy this, as long as the satirical jabs at Republicans don't offend them, and fans of the French original should find plenty to like here as well.

OVERALL: Fans of Robin Williams would be remiss for not picking this up on Blu-ray, even if MGM typically muffs up their HD releases.
17 people found this helpful
See all reviews
Back to top
Get to Know Us
Make Money with Us
Amazon Payment Products
Let Us Help You
EnglishChoose a language for shopping. United StatesChoose a country/region for shopping.
© 1996-2021, Amazon.com, Inc. or its affiliates