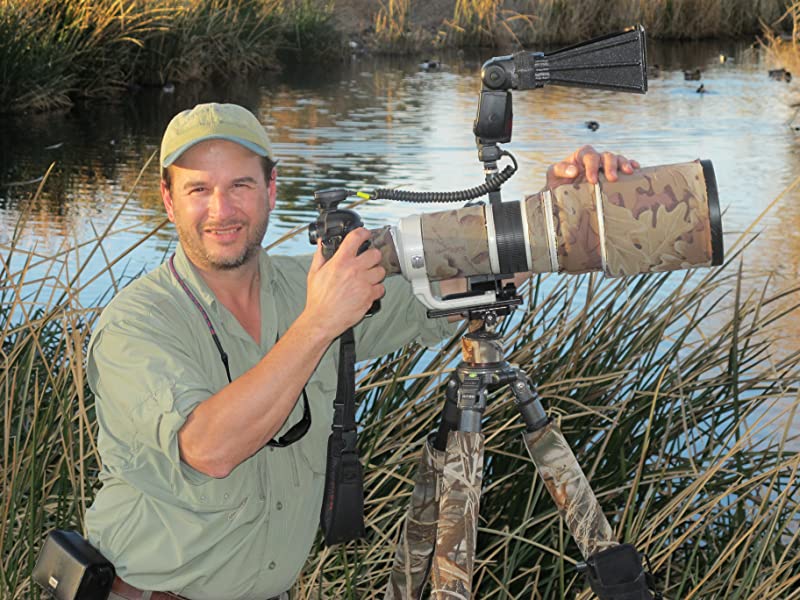 Naturalist, wildlife photographer and writer Stan Tekiela is the originator of the popular state-specific field guide series. Stan has authored more than 190 educational books, including field guides, quick guides, nature books, children’s books, playing cards and more, presenting many species of animals and plants. With a Bachelor of Science degree in Natural History from the University of Minnesota and as an active professional naturalist for more than 30 years, Stan studies and photographs wildlife throughout the United States and Canada. He has received various national and regional awards for his books and photographs. Also a well-known columnist and radio personality, his syndicated column appears in more than 25 newspapers, and his wildlife programs are broadcast on a number of Midwest radio stations. Stan can be followed on Facebook and Twitter.

Female: buff brown bird with tinges of red on crest and wings, a black mask and large red bill

Male: red bird with a black mask extending from face down to chin and throat, large red bill and crest

Juvenile: same as female, but with a blackish gray bill

Stan’s Notes: A familiar backyard bird. Look for the male feeding the female during courtship. Male feeds young of the first brood by himself while female builds a second nest. The name comes from the Latin word cardinalis, which means “important,” as represented by Catholic cardinals in their scarlet priestly garments. Very territorial in spring, it fights its own reflection in a window or other reflective surface. Non-territorial during winter, gathering in small flocks of up to 20 birds. Both the female and male sing and can be heard any time of year. Listen for its “whata-cheer-cheer-cheer” territorial call in spring.

Start reading Birds of New Hampshire & Vermont Field Guide on your Kindle in under a minute.

4.7 out of 5 stars
4.7 out of 5
109 global ratings
How are ratings calculated?
To calculate the overall star rating and percentage breakdown by star, we don’t use a simple average. Instead, our system considers things like how recent a review is and if the reviewer bought the item on Amazon. It also analyzes reviews to verify trustworthiness.
Top reviews

~purplemoon~
5.0 out of 5 stars The best field guide book we've found!
Reviewed in the United States on July 25, 2017
Verified Purchase
We love this field guide! We have a well loved field guide for CT and since we frequent the VT and NH, we thought we'd better get one for that area! Lots of the birds, however, are the same, but that's to be expected since the states are so close in proximity to each other and totally not an issue for us.

This field guide is broken down quite a bit and is super easy to use and quickly reference. It's broken down by size, color, region and gives lots of interesting and helpful information about each bird. It also gives tips on how to observe them and gives an illustration with "bird basics" labeling that shows you each part of the bird, and what it's called. The guide is also a great size for taking with you on hikes, or anywhere else you might go (other than your own backyard). It's about 6" x 4" x 3/4". Easily fits into a backpack, or even a jacket pocket. We highly recommend it!

EKD71
5.0 out of 5 stars Excellent Bird Book for NH!
Reviewed in the United States on December 6, 2018
Verified Purchase
I have several bird books but this is by far my favorite! I love that it specializes in just NH. The layout is so easy to follow and find birds by using their colors/size. I wished I had found this sooner.
Read more
One person found this helpful
Helpful
Comment Report abuse

Pamela G
5.0 out of 5 stars Genius
Reviewed in the United States on December 5, 2018
Verified Purchase
What a great idea - to list birds by color and how they look - makes bird watching easy and a joy - even for someone like me (a novice) and my son (who knows his birds)
Read more
One person found this helpful
Helpful
Comment Report abuse

Brittany
5.0 out of 5 stars Great Help in Bird Identification.
Reviewed in the United States on May 3, 2020
Verified Purchase
Thw way the birds are organized has been so helpful in identifying my backyard birds. You are able to quickly identify as the sections are color coded based on the bird. The level of detail in the written text is great, too.
Read more
One person found this helpful
Helpful
Comment Report abuse

John Dubiansky
3.0 out of 5 stars Not user friendly for a amateur.
Reviewed in the United States on January 1, 2019
Verified Purchase
Not as easy to use as I would like for an amateur. Not really sure how to improve it, I just still find myself turning to google to identify birds at my feeder.
Read more
Helpful
Comment Report abuse

Jeffrey Donatello
5.0 out of 5 stars Great for a new birder with a birdfeeder in NH
Reviewed in the United States on May 9, 2020
Verified Purchase
Love that the colors help you find the bird. Dont search any further if you live in NH or VT.
Read more
Helpful
Comment Report abuse

Jacqueline Alger
5.0 out of 5 stars Vermont birds that visit my feeder.
Reviewed in the United States on August 13, 2019
Verified Purchase
Finding out what kind of birds were coming to my feeder.
Read more
Helpful
Comment Report abuse

Colleen Bovaird
5.0 out of 5 stars Lovely gift!
Reviewed in the United States on January 11, 2019
Verified Purchase
My NH friend is a new backyard birder and this is a perfect companion to her kitchen window and feeder station!
Read more
One person found this helpful
Helpful
Comment Report abuse
See all reviews

Page 1 of 1 Start overPage 1 of 1
This shopping feature will continue to load items when the Enter key is pressed. In order to navigate out of this carousel please use your heading shortcut key to navigate to the next or previous heading.
Back
Next
Pages with related products. See and discover other items: vermont history, birding guide books, england travel books