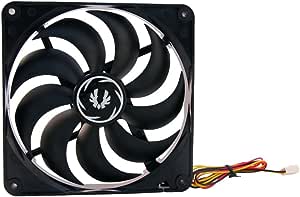 by BITFENIX
3.7 out of 5 stars 49 ratings
| 8 answered questions
Currently unavailable.
We don't know when or if this item will be back in stock.

3.7 out of 5 stars
3.7 out of 5
49 customer ratings
How does Amazon calculate star ratings?
Amazon calculates a product’s star ratings based on a machine learned model instead of a raw data average. The model takes into account factors including the age of a rating, whether the ratings are from verified purchasers, and factors that establish reviewer trustworthiness.
Top Reviews

M. Nelson
3.0 out of 5 stars Not as pictured.
Reviewed in the United States on January 12, 2015
Style: SPECTRE ALL BLACK 200MMVerified Purchase
Be careful; the picture that's shown is not exactly what the fan looks like. Usually this wouldn't really be an issue except I was planning on mounting the fan as an intake fan on the front of an Obsidian 650D case. I can't do that because mounting holes only exist on the side of the fan with the motor. This means that, with the included screws, you can only mount the fan with the motor facing the mounting surface (usually exhaust). If you mount the fan with the face of the fan towards the mount you would need fan screws that are about 20mm long. I ended up mounting it on the front of the 650D, but as an exhaust fan.

The fan is very quiet and has the added benefit of fitting in an Obsidian 650D case with both HDD cages present.

K F
3.0 out of 5 stars Not really a "230mm fan", but not bad for $12
Reviewed in the United States on January 19, 2018
Style: SPECTRE ALL WHITE 230MMVerified Purchase
As some have noted, the photo of the 230mm fan is incorrect. In reality, it is oval-shaped, with two flat sides and two reinforced round sides. Measuring the distance between the flats gives 195mm and the impeller diameter is 185mm. By comparison, Noctua NF-A20, which has a proper square shape, or Antec Big Boy 200 (with a similar to BitFenix oblong shape), both measure 200mm between flats and a 185mm impeller diameter as well. So, for all intent and purpose, this Spectre model should be classified as a 200mm fan, too.

The fan is fairly quiet, but not very smooth - vibration can be felt through the frame, the motor rumbles a little, and makes occasional scratching and clicking noises, which can become more annoying when run at less than nominal 12V. The hub is large and the bearings feel cheap - the hub can slide some 3mm up and down, if not more. All of that is quite typical and to be expected in this price range.

Lastly, it does not move a whole lot of air for its size, a likely compromise to keep the RPM down for quieter operation. Compared against the Noctua NF-A20 and Antec Big Boy, the BitFenix actually has better airflow than the Noctua (and subjectively is about as quiet, but not nearly as smooth), and handily outperformed by the Big Boy (on high setting), though that comes at expense of a much higher noise.

I am not docking any points for the mounting holes, since there isn't an industry standard anyway, and I usually make my own mounts regardless.

All in all, not a bad buy at $12, especially if you need a bunch of them. Just remember that it's really a 200mm fan - both for expectations and spec comparison.

Brian
5.0 out of 5 stars Very quiet at full speed
Reviewed in the United States on January 2, 2016
Style: SPECTRE ALL BLACK 140MMVerified Purchase
Very quiet fan. I have it attached to a top radiator. May not have a lot of pressure but is great for horizontal positions because there is little to no wobble in that orientation. My old case fans wobbled like crazy and were not suitable.
Read more
One person found this helpful
Helpful
Comment Report abuse

Johnny the Fox
5.0 out of 5 stars Great For Cooling Audio Gear!
Reviewed in the United States on September 6, 2014
Style: SPECTRE ALL BLACK 200MMVerified Purchase
I actually purchased a pair of these to use as a cooling solution for a large Onkyo receiver that doubles as a heater.
I am using a standard AC/DC adapter running at 12 volts on these 200mm BitFenix fans.
I had previously been using a pair of 120mm case fans that were positioned to pull out the heat generated by the Onkyo.
These did a reasonable job but I wanted to try something in addition.
I did the same thing with these 200mm fans, run them with a AC/DC adapter running 12 volts. These are designed to push air so they are blowing down onto the heat sinks in the rear of the receiver. I simply moved the 2 smaller 120mm fans to the front of the case.
This method of one set blowing in and the other sucking out the hot air works great.
The sound of the BitFenix is very minimal. I pretty much have to get right up on them to even hear them spinning.
All in all very pleased for my purposes.
Read more
2 people found this helpful
Helpful
Comment Report abuse

Kevin
5.0 out of 5 stars Five Stars
Reviewed in the United States on May 3, 2018
Style: SPECTRE ALL BLACK 120MMVerified Purchase
Nice quite fan that's, so far, been a good replacement for the existing fan that was in my system.
Read more
Helpful
Comment Report abuse

D. Grant
1.0 out of 5 stars Ran fine - for a week.
Reviewed in Canada on July 19, 2017
Style: SPECTRE ALL BLACK 200MMVerified Purchase
Item fit into a tight space and worked well - for a week. Then the motor died.
Read more
Helpful
Sending feedback...
Thank you for your feedback.
Sorry, we failed to record your vote. Please try again
Report abuse