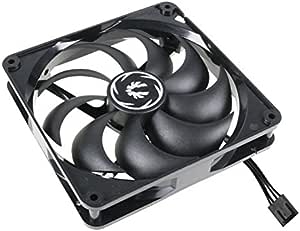 by BITFENIX
3.8 out of 5 stars 28 ratings
| 3 answered questions
Currently unavailable.
We don't know when or if this item will be back in stock.

3.8 out of 5 stars
3.8 out of 5
28 customer ratings
How does Amazon calculate star ratings?
Amazon calculates a product’s star ratings based on a machine learned model instead of a raw data average. The model takes into account factors including the age of a rating, whether the ratings are from verified purchasers, and factors that establish reviewer trustworthiness.

V71
5.0 out of 5 stars Impressive and quiet performance.
Reviewed in the United States on November 13, 2017
Style: SPECTRE PWM SOLID BLACK 140MMVerified Purchase
- Top exhaust - the cable was long enough to connect it to lower mobo PWM header, all behind and across the mobo!

- I did not use supplied screws, since my case has rubber grommets and has its own longer screws. Mounting was really easy on an empty case, even with shaky grommets (and problematic with mobo in, but this is not fan's fault, it's the case+mobo design, see a side note below).

- Fan was set to level 7 (I think, or Lev 8) on my Asrock mobo, it spins very fast and though making a kind of a somewhat whooshing sound (air is being pushed, after all), the sound and tone are feeling as quiet enough. My son, 17yo, said he cannot distinguish it from other fans in the case - the case was open and my son stated that in his opinion the fan is very quiet. I was just cross-checking with him.

- Though this is a PWM fan, as I mentioned, I used, for a week, for top (farther/towards rear) exhaust. Closer to the front of the case, next to this Bitfenix, I have a 140mm CM 1000rpm fan. Compared to CM the "hand test" is won by Bitfenix hands down, obviously, due to higher RPM. But I like my case quiet and this does the job of exhausting air quietly enough - check and check. Quirtness is a subjective concept, though. I am a bit "afraid" I have negative air pressure in my case now:) That is to say how impressive this fan pulls air. Good for airflow, I am now curious about its real static pressure characteristics.
(My negative air pressure concern - due to two 140mm 1200rpm generics in front, CM and this BitF on top and one 120mm 1600->@1200rpm rear)

- On a side note, just make sure your fans are far enough from your mobo headers and hitspreaders. In my case it is too close and pressed over CPU voltage cable. I couldn't find slim 140mm fans with 140mm mounting holes on sale for now. In the meantime my CPU displays weird behavior and I removed the fan. I am not sure if this is because of the fan pressing on CPU cable, software or old mobo. Just to say - choose your cases and mobo wisely!;)

E. Lake
2.0 out of 5 stars The bearing started to fail after about 11 months of ...
Reviewed in the United States on February 24, 2017
Style: SPECTRE PWM SOLID BLACK 140MMVerified Purchase
The bearing started to fail after about 11 months of general use. While the fan was still spinning and pulling air at this point, it was generating quite a bit of noise, defeating the point of buying a fan with this bearing type. The fan was also placed behind a dust screen, so there was minimal dust built up to have assisted in the failure. If Amazon allowed half-stars, I would rate this fan at 2.5 because it still worked as intended for those eleven months.
Read more
2 people found this helpful
Helpful
Comment Report abuse

Stephen
5.0 out of 5 stars 1.88mmH2O static pressure at 22.5dBA with great flow rate. Fantastic!
Reviewed in the United States on April 3, 2015
Style: SPECTRE PWM SOLID WHITE 120MMVerified Purchase
I first purchased 4 of these in mid-2013 for a push-pull configuration for my 240 water cooled radiator. They were $8 a piece when I ordered them, but at $15-20 each they're still a great purchase! Not only are they still going strong after heavy use a year and a half later, but they're performance is just as good as new. I've since then purchased six of these, and for the foreseeable future I'm not sure that will change. Here's why:

- PWM! I have a break-out board that controls all of my fans, and PWM is the most efficient way to do that, especially when you have multiple fans running at a time.
- 1.88mmH2O static pressure with 51 CFM at 22.5 dBA at 1800RPM. Basically they maintain high static pressure and airflow but are very quiet! These specs are very similar to most Noctua's which are twice the price, and are ten times as ugly!
- Quality fluid bearings.
- On all the fans I received the exhaust side has 92mm fan spacing holes. This is awesome if you mounted the fans to a rad (Which these are perfect for) and want to mount the exhaust to another part of the case with different sizing. This added flexibility is very much appreciated!
- The white color that I got them in is very clean and professional, and hasn't faded in the slightest. It also matches most other white computer components very well.

When at idle at 700ish RPM, they are dead silent, and for most basic computing that's when they operate anyway. But when you put on your headphones and start up a game, they're going to keep your components cool and not sound like the jet engine many fans are known for!

The only possible down-side to these fans is the lack of any LED ports; a non-issue for me as I prefer a totally dark room when I compute, but this is still a consideration for those looking to light their computers.

The length of the cable, to me, is actually way too long, but for most people that is probably a good thing as it will allow you to place these in multiple locations without extensions, which I've experienced with Ya-Li, Cooler Master and Corsair Fans.

Russ
4.0 out of 5 stars Good fans, maybe too brittle
Reviewed in the United States on November 2, 2017
Style: SPECTRE PWM SOLID BLACK 120MMVerified Purchase
These are very quiet fans, however they might be a little too brittle. I accidentally stuck the side of the case into the moving fan maybe two years after I bought them, and two of the blades snapped off like they were glass. I glued them back on, and it still sounds the same, but it is pretty ugly.
Read more
Helpful
Comment Report abuse

Chris Wilson
4.0 out of 5 stars Great low cost variable pwn fan
Reviewed in the United States on November 17, 2015
Style: SPECTRE PWM SOLID BLACK 120MMVerified Purchase
This fan is a great buy. Good variable range that is not very load when the system is under full load. The black matte design is aesthetically pleasing. The cable is fully sleeved which is a huge bonus if you do not like ketchup/mustard in your case. If you're building for stealth or budget I would recommend this fan highly.
Read more
Helpful
Comment Report abuse

Alan Wheeler
2.0 out of 5 stars Lasted just over 2 years
Reviewed in the United States on June 25, 2018
Style: SPECTRE PWM SOLID BLACK 140MMVerified Purchase
Was fairly quiet, but now just a bit over 2 years since I purchased it, the bearings are going out. Fan makes a grinding sound.
Read more
Helpful
Comment Report abuse

Because of the cooling needs of my new system, it is not silent, but it is not overly noisy either. In a less demanding system, it would probably run near silent.

alex
5.0 out of 5 stars really good
Reviewed in Canada on January 7, 2020
Style: SPECTRE PWM SOLID WHITE 120MMVerified Purchase
fans running great and they match the white of the bitfenix case I have
Read more
Helpful
Sending feedback...
Thank you for your feedback.
Sorry, we failed to record your vote. Please try again
Report abuse